TRENTON – Everything hit at once or almost at once in Trenton.

City Hall insiders knew it was coming but then it was there suddenly after 20 years: Mayor Doug Palmer was retiring.

With that, the news headlines landed in succession, overlapping one another, unending: Trenton’s flat-lining financially and the mayor wants to sell the waterworks to generate dollars; “Mayor blows top on cop,” screams the Trentonian as citizens mobilize against his plan; facing a state crisis, Gov. Chris Christie now has to cut 20% out of Trenton’s budget, heaping pain on pain; in response, Palmer says he’ll have to lay off cops; a seven-year old girl is allegedly gang-raped; community outrage ensues; Russell Simmons and Al Sharpton come to Trenton to rally against violence, courtesy of mayoral candidate Shahid Watson.

All the while, nine other candidates race to succeed Palmer: jockeying, organizing and ultimately doing very little to steal a headline, anyway, nothing to rival the outgoing Palmer or Watson’s twofer: the Russell Simmons rally, and his first day on the campaign trail confession to having fathered kids out of wedlock.

A judge rules Palmer needs a public referendum in order to sell the waterworks. Now there’s no plan for revenue in addition to the state aid hit to the city’s $210 million budget. Palmer zaps Christie. Christie zaps Palmer.

And ten candidates – Watson more avidly and publicly, albeit with a shorter runway given his late entry into the contest – dutifully trudge with no sense of supremacy toward May 11th.

Any sense that Tony Mack’s the man to beat in the race requires a conventional wisdom gut-check Sunday as Mack proves a no-show at a big League of Women Voters debate forum downtown at Mercer County Community College.

There’s no murmur of outrage in the packed crowd.

It’s a beautiful day and the weekend. If Mack, intended or not, in absentia transmits the sense that he’s more concerned with a little league victory than winning the mayor’s contest, he has arguably attained some unequivocal statement of pride in community service – in and of itself a victory without having to answer a single question. But the gesture also carries a redolence of confidence – is it over-confidence?

With Mack gone, businessman John Harmon labors hard to prove he’s the alternative to the era of the retiring Palmer, as he slips some variation on the word “banker” – he is one – into every other answer.

“I’m an outsider, I’m not a politician,” announces Harmon, who like Mack ran unsuccessfully against Palmer four years ago. “We have to let people know that Trenton is open for business. … I would just expand on my baking experience to run the city. …I’m not a government insider.”

Everyone else with the exception of Weeden – and that includes Mack – has had a political umbilical cord running back to Palmer or the Democratic Party establishment at one point, say Harmon’s allies. So Harmon works all afternoon to plant himself in the consciousness of the electorate as the true change candidate from 20 years dominated by Palmer.

“Why hasn’t this been done in all these years?” he demands, with the crowd roused, as he considers 3,000 decaying properties that aren’t – but should be – on the tax rolls. “This should have been a long, long, long time ago.”

The statement digs at Jackson, Segura, Pintella, Lartigue, all of whom have either been on the city council or, as is the case with Jackson, a member of the Palmer administration.

The race fascinates at this point with the knowledge that every declaration by a candidate carries the potential to secure a bloc of votes to the exclusion of another candidate – and every bloc of votes becomes a target.

A newcomer to politics, Department of Public Works Director Jackson has a built-in advantage among the 400 plus DPW employees and their families (certainly not all of them live in Trenton, but a chunk has political power here) and potentially other city employees especially rattled now by Gov. Chris Christie’s proposed cuts to the city.

“This is a rallying point for public sector employees,” he says, when quizzed about Christie’s proposed $43 million reduction in state aid for Trenton.

The champ of public works, Jackson challenge is now to reach beyond that demographic – not an easy task with eight other people here unwilling to let him escape his identification as simply the DPW candidate. So when a question about poorly paved streets lands onstage, Segura grabs it and throws his answer with bad intentions directly at Jackson.

In seeking paved streets as mayor, “I’ll sit down with the public works director and hold him accountable,” pledges the councilman with grating emphasis. “We need to have brand new streets so our cars last at least three months.”

Jackson hits back when he has the microphone.

“Knowledge is power,” he says. “Seventy-five blocks per-year over the past six years have been paved. We’re on a 15-year program to do every street in the city.”

There are harrumphs of displeasure in the audience.

Pintella as the council president and 16-year veteran of public office inevitably finds himself shouldering the era as partially his own creation.

He has to undercut Jackson by being the rightful defender of city employees – “I’m not interested in firing anyone,” he says to a Jim Hooker question that almost everyone else ducks – while pitching Palmer’s controversial waterworks sale project as a city revenue generator – an idea that’s already hitting turbulence with the public.

Next to him, Weeden, who helped lead the public charge against the waterworks sale, smolders knowingly.

Pintella has a trump card, and that’s Christie’s axing Trenton out of $43 million when the state actually rightfully owes the city $155 million as a tenant of city property, Pintella argues.

The state should pay up, he says – and wins the crowd with an argument essentially everyone makes in the field of candidates. If Palmer was Mack’s, Segura’s, Lartigue’s and Weeden’s choice target, Christie has become the contest’s definitive bad guy.

“Make this governor responsible for his own irresponsibility,” says Segura. “If we have to sue him, we’ll sue him.”

Segura and Lartigue quietly compete for public support. Both are council people seeking distance on the Palmer record. Lartigue repeatedly references her round table forums as a way of illustrating how she would govern: with plenty of public input before making a decision.

This much is true, she says, “Public safety is job one.”

Weeden in his closing statement catches the attention of the crowd when he notes a question neither Hooker nor Pruitt asks throughout the two-hour forum and that’s, “What have you done?”

“Who’s going to stand up to this governor who’s left us high and dry?” asks the gadfly factory owner. “I defended us against eminent domain taking, I fought against racist regional contribution agreements and enforced residency requirements. I walked the streets getting signatures to save the Trenton waterworks.”

For the voter oppressed by the idea that Pintella has too much government experience and Harmon not enough – none in fact – Hamilton comes quietly up the middle as a private-public sector hybrid, complete with low-key gravitas.

“My vision and agenda for the city gets us back to basics, putting us back-on-track by focusing on what’s truly important: economics, education and empowerment,” says the freeholder, who argues that the freeholder board’s adherence to a cap exacting less than a four percent tax increase this year “is pretty good.”

His fire blanket phrased remedies for Trenton proper contain something for all: attract developers and businesses to… with creative tax incentives and speedy permit approval; adopt a “Responsible Contractors’ Ordinance,” giving Trentonians a chance to get back-to-work and earn an honest wage for an honest day’s work; rid the city of its history of wasteful spending, and make city government more transparent, efficient.

“He’s been there too long doing the bidding of the party,” Harmon gently complains.

If a voter likes low-key gravitas but doesn’t hear sufficient detail from Hamilton, then there’s the grey side-burned Brown, who reminds voters that schools in Trenton were built with the capacity for parent learning centers, and says if Christie dug in on withholding the $43 million in aid, as mayor he would file bankruptcy in the City of Trenton.

He’s all volatility and excitability.

The rape of the seven-year old girl fueled Saturday’s anti-violence rally at the Lighthouse that he organized with Simmons and Sharpton.

Hooker early politely asks Watson to remain seated when he gives his answers, to remove the pressure others would feel to rise for similar impassioned effect.

Watson returns a look that suggests he’s already demonstrating sufficient self-restraint by not demanding the use of a bullhorn – but he sits down.

He wants school prayer. He vows greater voter turnout because of his presence in the race.

He’s the most theatrical candidate, the one most obviously intent on standing apart – even as he upbraids the rest of the field for treading on the record of his “brother” and “beloved” Mayor Palmer, the 20-year face of the Trenton establishment.

“Our babies!” he shouts, referring to the youth, the victims of crime. “I warned us this was going to happen. I went down to Washington and got Weed and Seed funding. We’ve got problems. It’s about to blow up in Trenton.”

“Time,” says Hooker with an eye on the timekeeper’s waving red flag. 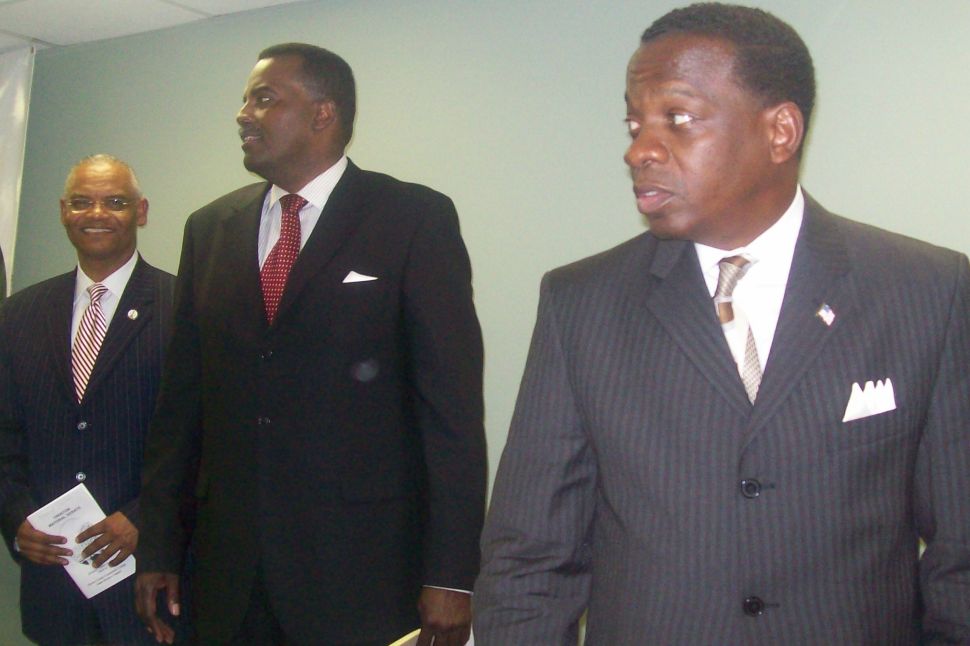