First, the governor was outraged over an email sent by a teachers union chieftain.

He demanded an apology.

Keshishian today demanded that the governor offer a mea culpa to both students and teachers.

“Chris Christie’s incessant attacks on teachers and public education are out of control, and now he’s gone too far,” Keshishian said. “On behalf of our 200,000 members, and the 1.4 million students we teach every day, I am demanding that Governor Christie apologize immediately for his insensitive and inflammatory comments. I am also calling on him to stop his daily assaults on public education and school employees and to begin acting like a governor who truly cares about all of the people of New Jersey. To do anything less is absolutely unacceptable.”

In the middle of their statewide slugfest sparked by Christie’s cuts to education and his demand that teachers accept a year-long wage freeze, Keshishian’s upbraid of the governor today landed on School Board Election Day.

Propelled now into nose-to-nose proxmity with the NJEA as voters go to the polls, Christie has advised people to vote down those school budgets that specifically do not contain year-long teacher wage-freezes.

He claimed a victory in the ongoing scrap nearly two weeks ago when he exacted an apology from the NJEA for the contents of an email written by Bergen County Education Association President Joseph Coppola praying for the death of the governor.

That forced Keshishian to take an oratorical knee.

The “NJEA condemns the inappropriate ‘prayer‘ contained in a letter sent by the NJEA Bergen County regional offices and our Bergen County affiliate,’’ she said then. “Language such as that has no place in civil discourse. It was intended as humor, but it is not funny.’’

Now, embracing teachers and students in one tableaux, Keshishian says it’s the governor’s turn to humble himself.

“You’d think that a former federal prosecutor would get his facts straight before accusing someone of wrongdoing,” Keshishian said. “But what he said yesterday was outrageous, mean-spirited, and untrue.”

The union leader said the incident that sparked Christie’s salvo involved a Monroe Township teacher who, as part of a school-wide “Project Democracy” curriculum, had her third-graders give their parents a two-question handout asking parents if they voted in school budget elections, and if they intended to vote in today’s election. Their answers were used for a classroom discussion about voting.

“At no time was there any attempt to find out how parents intended to vote, nor to convince parents how to vote in the school budget election,” Keshishian said. “But that didn’t stop this governor from insulting teachers and students in the crassest manner imaginable. He owes all of us an apology. …The ‘prayer’ – which has been an Internet joke for months now – was still inappropriate, and we apologized to the governor because it was the right thing to do.

“But yesterday’s insult was not a joke at all. It came right out of the governor’s mouth, and it was a vicious, mean-spirited, and hurtful insult to students and teachers alike,” Keshishian added.  “What kind of message is he sending to our students when he refers to them as ‘drug mules’?’ This is just incredible coming from this governor.” 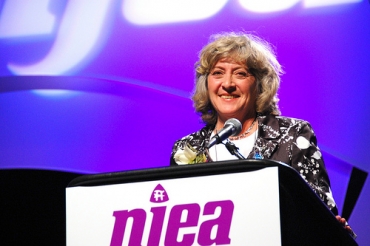