Lumped up in GOP county conventions over the past several weeks, Tewksbury businessman David Larsen prior to absorbing another loss to U.S. Rep. Leonard Lance (R-Clinton) last night, startled attendees of the Hunterdon County Republican Convention when he confessed to being behind in property tax payments.

“I wanted to let people know I’m being affected by this,” said Larsen, who’s running to the right of Lance but to date has been unable to get around two other longshot, self-described conservative canidates running in the Republican Primary, who fared as well – or as poorly – as Larsen in county conventions.

“I’ve been paying toward the principal; I owe $22,000 now (toward taxes on his Tewksbury residence), and the payment should be done in full,” the candidate told PolitickerNJ.com. “I have been paying taxes but I own properties in New Jersey, and I got behind. …Leonard Lance has been in the state legislature and state senate, and part of the problem is the politicians who are there and have been there for years.”

Committed to putting $300,000 of his own money into this 7th District Primary campaign, Larsen said the property tax blowback on his principal residence has jammed him up – but not enough to derail his campaign.

“The money toward my campaign is coming out of the sales of property – that’s also what I’m using to pay my back taxes,” he explained. “I got a little behind in real estate taxes. I’ve been paying double-digit interest. I pay close to $40,000 in taxes each year. The places I was going to rent didn’t rent, and properties where I intended to get the money didn’t sell.”

So it put him behind in paying his local property taxes.

“I have to be honest,” Larsen said. “I wanted to get that out last night. I can really understand. People are hurting everywhere.”

“Lance won very decisively,” said the veteran chairman. “I don’t think it mattered in the way people voted for Larsen versus Lance. Lance was the overwhelming favorite because he is experienced and has served the county and the district very well over the years.”

Part of what motivated Larsen to challenge Lance was the latter’s “aye” vote on cap and trade, which Kuhl said hardly added up to a mortal wound.

“He (Lance) indicated months ago that if it (cap and trade) were to pass in the U.S. Senate and return to the House and certain changes were not present, he would vote against it,” Kuhl said. “While I may be personally against his initial vote, I think the congressman or another politician makes a vote that the majority of people don’t like, we consider the record of service, the fact that he has done so many good things and for that, deserves our continued suppprt.”

While declaring his freedom now beyond the convention process “hoopla” to try to take his case to “real voters,” Larsen, a cabinet-making businessman, complained about the process at last night’s convention.

“The ballots were all numbered, and that struck me as quite an intimidation, because people would know who voted for who,’ said the candidate. “All the ballots had a number in the top corner that corresponded with people who walked in. I talked to several committee members who were upset.”

Kuhl said he would examine improving the process, but denied that the numbers were there to pinpoint committee members for payback purposes.

“There were indeed several people who mentioned that to me,” Kuhl confirmed. “The reason they were numbered was to know if we received 126 ballots from the 126 people who were registered to vote. That was the maximum amount of ballots allowed.”

Larsen simply said, “It was uncomfortable and intimidating.” 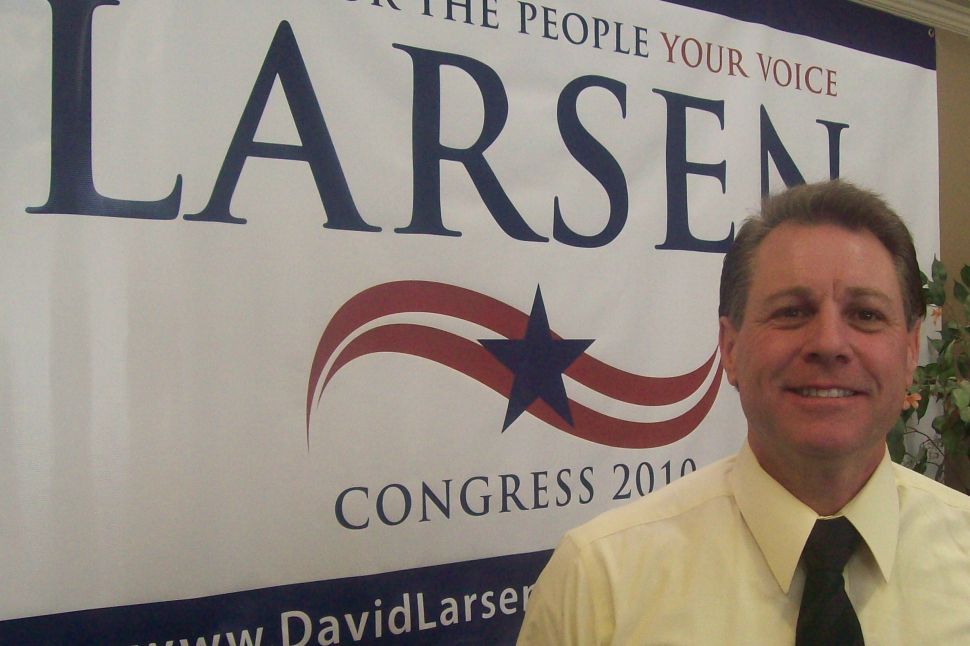