“The problem started with George Bush,” Pallone told PolitickerNJ.com moments before boarding an elevator at the Newark Club last night.

“In his last few months in office, he lifted the executive order for a moratorium that had been in place for 20 years and Obama is continuing that,” added Pallone, who was in Newark in support of West Ward Councilman Ronald C. Rice. “If you have a spill, it will travel hundreds of miles. I would like this moratorium put back in place, the one that was in place before George Bush lifted it.”

Gooch campaign manager Tony Sayegh objected to Pallone’s ability to work Bush’s name into an issue championed by – of all people – Obama; even as he fingered Pallone’s yes vote on cap-and-trade.

“As a longtime supporter of Clean Ocean Action, Diane Gooch credits Frank Pallone for defending New Jersey’s coastline,” Sayegh said. “However, his kneejerk partisanship is on full display as he tries to pin President Obama’s plan on President Bush. If he genuinely cared about reducing energy prices for hard-working New Jersey families, he would have voted against cap-and-trade, which will push gasoline past $4 and reward polluters in China.”

Running against Gooch in the Republican Primary and showing no signs of slowing despite Gooch’s lock on the party lines and continued establishment pressure to exit, Little said she supports coastal drilling.

“I think it’s a good idea,” said the GOP mayor. “Energy independence is important. Certainly we have to be guided by where commercial fishing is done. Whatever drilling is being done, there must, of course, be adequate safety checks, but oil drilling has been around for a long time.”

Weighing the spill risk against the benefit of oil, Pallone said no way.

“There’s very little oil out there, and the danger to the coastal environment could be billions of dollars,” said the congressman. “It doesn’t make sense for that small amount of reserves.” 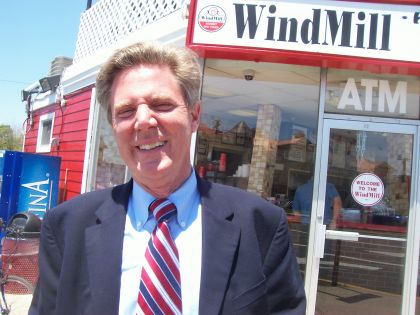