TRENTON – A judge’s ruling requiring a referendum for the sale of the Trenton waterworks prompts mayoral candidate Frank Weeden to give a short answer response when asked who among the candidates can take the most credit or reap the most political benefit from the ruling.

“Me,” says Weeden, a business owner and city hall activist, who from the start opposed Mayor Doug Palmer’s proposal to sell the waterworks in order to close a city budget gap.

“I pounded the streets collecting the signatures when they first posed that to the council,” Weeden tells PolitickerNJ.com. “I spoke adamantly against it on their first reading. I said it was a bad idea, a quick fix and long-term mistake. In short, the Trenton waterworks generates revenue for the City of Trenton. I sweated this issue on the streets.”

Literature distributed by At-Large Councilman Manuel Segura notes that the candidate led the fight against the deal, a boast Council President Paul Pintella scoffed at earlier today as he accepted the endorsement of CWA Local 1039.

Weeden says Segura initially backed the deal on first reading, then voted against it after a citizen action group pressured the governing body.

“I wouldn’t say that he led the effort against the Trenton water works sale – that’s a bunch of bologna,” says Weeden, referring to Segura’s campaign piece. “The leaders of that effort were Michael McGrath and Algernon Ward – community activists. We appreciate that he (Segura) did one good thing, but in fairness, he had already decided to run for mayor at that point. Before then, he had voted 100% with the mayor.

“At least this vote showed progress, and progress is important in politics – certainly better than Council President Pintella and Councilwoman (and mayoral candidate) Annette Lartigue digging in their heels,” adds the candidate, who describes himself as ecstatic over the judge’s ruling, and motivated to get the council to kill the proposal outright rather then wait for the referendum. 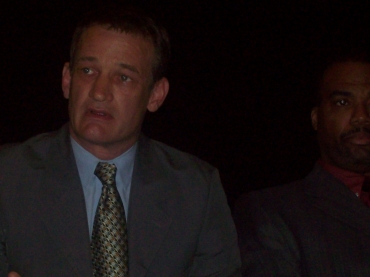