TRENTON – The community pizza parlor named Frank’s actually goes by Vito’s in the street, and when Tony Mack gets here, it’s evident that Vito’s or Frank’s celebrated Trenton street cred probably has little on Mack.

“I believe in my heart through my experiences that people will vote for you because they believe in you,” says the mayoral candidate, who works hands here shortly after Council President Paul Pintella received the embrace of CWA Local 1039 at his campaign HQ.

“An endorsement is not transferable to a vote,” Mack argues. “I’m in the neighborhoods. I’m knocking on doors, baby.”

He cant talk long. He talks in bursts.

Too many people approach him with hugs and love.

“My experiences as someone who’s seen hard times – and good times – give me access to the everyday voter,” says the candidate, a former Mercer County freeholder. “We’re excited about where we are in the campaign. We know it’s going to take a whole lot of hard work to complete this task, but we’re up for it.”

The Rev. Shahid Watson worked hands earlier in the vicinity, but he didn’t have the deep contact Mack has here.

“That old thief? He doesn’t have the history of being close to the people that Tony has,” says Willie Howlen, referring to Watson.

“There are a lot of people around here who just surfaced,” says Howlen’s brother, Anthony.

He nods his head in the direction of the smiling face of Eric Jackson, plastered on the front of the rival candidate’s campaign headquarters on the south side of State Street.

“What it comes down to,” says Jamel Sharieff O-Bey, pulling up on a bicycle, “is that Tony has people’s respect down here because he’s a family man and a real person.”

“Man, the way I look at it, it’s different strokes for different folks,” he says. “To each his own. I think, when it comes to the young girl (a rape victim), we need a universal mechanism in his city. We need one specified kind of security code or a specified number of guards per highrise building, certain kinds of ID.”

“It’s your time, Tony, it’s your time,” says a supporter, angling an index finger in Mack’s direction before the mayoral candidate pulls him into an embrace.

“Spread the word for me,” says Mack, a loser four years ago when he challenged Mayor Doug Palmer, now trying to be the street  guy the retiring two decade long Palmer’s supporters say the mayor was once – through his first two terms in office.

“Is two terms enough, Tony?” comes the question. “Are you ready to commit here and now to two terms?”

“No, that’s not right,” says Howlen. “You should be there as long as you’re needed.”

“Look at Obama,” another man calls over his shoulder as he he heads down Broad. “He’ll need a whole first term to clean up the mess left by Bush.” 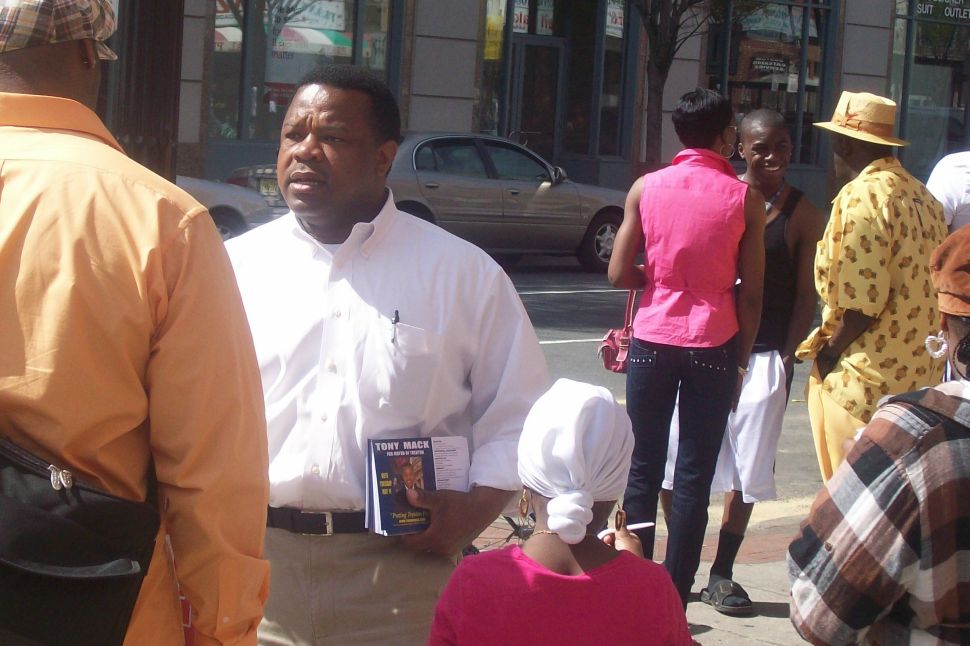