In a financially troubled environment, an ally of a rival campaign wants to take a chunk out of former Mercer County Freeholder Tony Mack, who appears to have amassed a significant bulk of grassroots support and positioned himself at or near the front of a pack of ten candidates running to be the mayor of Trenton.

“Tony Mack seems to have financial problems every couple of years with budgets,” said Lionel Leach, political and legislative
director for CWA Local 1039, an organization that has endorsed Council President Paul Pintella for mayor.

Leach cited a report in the Trentonian noting Mack’s bounced checks following his failed 2006 mayoral campaign, and recalled the candidate’s separation agreement from his position as business administrator of the Barrington Board of Education following months of uncertainty over the district’s finances.

“Is this a man we can trust with a $192 million budget?” said Leach. “As the political and legislative director of CWA Local 1039, I have an obligation to inform our president and our Trenton union membership of the magnitude of this situation; this affects the future of Trentonians.

“Can we trust Mr. Mack with the ability of managing a $192 million city budget when he cannot balance a campaign checkbook or a Board of Education budget? The answer should be a resounding ‘NO!'”

“Lionel doesn’t understand the dynamics of our city,” the candidate said of the Essex-county based operative.

“I am a state-certified school business administrator – you have to earn that qualification, and I am competent in every aspect of school and municipal finances. I’ve worked under the best business administrators in the State of New Jersey, and I am prepared to lead our city. I know enough about government to hire a chief financial officer.”

Mack said he anticipates being able to save $12 million in overtime costs, $6-8 million in consulting fees; and generate money from the conversion to the tax rolls of 3,000 vacant properties and payment in lieu of insurance for employees and attrition.

“The governor and I agree on several things, including the transparency and accountability of government, which will be the hallmarks of our administration,”” Mack said. “We intend to open our books to the governor’s office and we will embrace their partnerships. We will ask for some kind of wage payment for those who live outside of the (city) to offset our deficit. I have a decent relationship with people in the legislature and am looking forward to that partnership. I’m ready. We lowered taxes in the county, and I am in position to move our city forward based on past practices.” 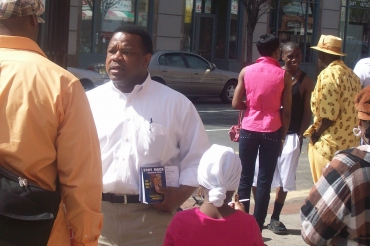