LONG BRANCH – They appear out of the rain, blue collar faces in baseball caps, wrapped into windbreakers and army jackets.

Mayor Adam Schneider strides through the crowd and a few people break off and follow him through the doors into the auditorium here at the middle school, scene of tonight’s mayoral debate.

They must have a poll somewhere that tells them the hard-edged, 20-year veteran with a penchant for big development needs the exclamation point on his progressive party credentials in this heavily Democratic shore town.

Now challenger Brian Unger appears in a cocoon of Democratic Party operatives, equal parts Union, Monmouth and Morris County, who have been running operations in here for nearly half a decade. These guys racked up win after Bush backlash win until they ran headlong into Chris Christie’s massive Monmouth County victory.

They’ve re-grouped around Unger to try to take down the fiercely independent incumbent, who’s tangoed more than too many times to remember with the local, towering Democratic Party figure: U.S. Rep. Frank Pallone (D-Long Branch).

“I’ve spent the last 20 years with the kids of this community,” says the mayor. “It’s the best part of the job. I can go to any Long Branch sporting event I want, and I promise you, I’m going to be going to them for the next four years.”

Sensing a misstep by his opponent as cheers become groans in the audience, Schneider rejoices in doubling back to the school spirit issue moments later.

“Brian missed three years when we were the best wrestling program in New Jersey, and I had a blast with those kids,” says the mayor.

Schneider goes back to the roots in his opening statement. Literally. He started off as an open space-saving activist. This was 20 years ago.

He’s energized on the campaign trail.

“People are thrilled with the work we have done in this city. We made a decision to increase the size of our police force from 70 to 100,” says the mayor. “People are safe. Proud.”

Fighting the tag that he’s too volatile to serve as mayor, Unger’s voice at the outset borders on the serene.

“What we hear door to door is we hear change,” says the challenger. “You’ve done good things. It’s time to move on. I also supported a new pier but not a $100 million boondoogle. The pier cannot fall on the shoulders of our taxpayers.”

People want cleaner and safer in the western sections of the city.

“After 20 years, Long Branch owners are suffering from failed development and the threat of losing their homes to eminent domain,” says the challenger.

A few answers later, Unger upticks his tone on the subject of what he says is misinformation about his plans to eliminate cops. It’s not going to happen, he says.

After boasting about freezing spending and not rehiring people, Schneider fields a compliment from Krebs about his fine work on the parks.

Then the forum gets rugged on the subject of Schneider’s redevelopment of the waterfront – a dividing line between the two mayoral candidates.

“Why have you refused to ban the abuse of eminent domain in our city?” Unger asks the mayor.

“You know, it’s funny, Brian praised the building of Pier Village, which couldn’t have been built without eminent domain,” says Schenider. “I think eminent domain is over.”

“Why won’t you let the ordinance be introduced? What are you afraid of?”

The moderator moves along the program. One question at a time.

Given a crack at a question, Schneider retaliates.

He asks Unger how he intends to cut the budget.

Unger goes on the offensive, which appears not to bother Schneider, who rebuts with the following: “Brian is telling you he’s going to cut the budget 20 percent and when I asked him how, he can’t tell you.”

Schneider later accuses Unger of flip-flopping on his public statements regarding the swanky beachfront project that has defined the revitalization of Long Branch.

“There’s no question that Pier Village is an improvement over what was there,” says the councilman. “There are seven people in the City of Long Branch who would rather see the burned down pier and strip clubs. But for the rest of the waterfront development, it has to be for the community.”

After Unger enumerates working class offerings he would like to see round out the beachfront and his supporters cheer, Krebs gongs him.

“You need ratables,” he says. 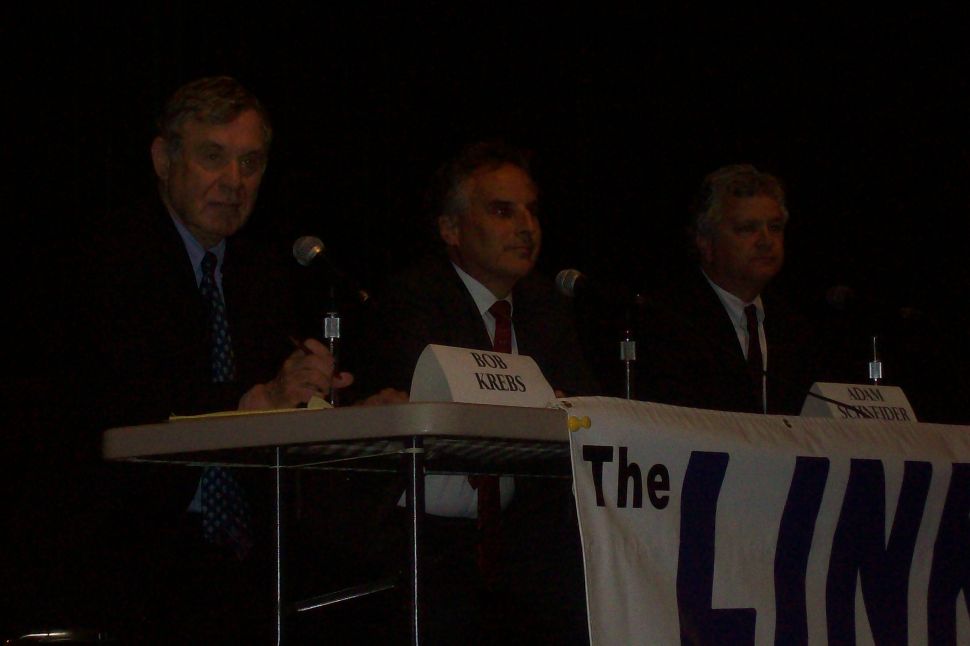