JERSEY CITY – Former Mayor Gerry McCann ranges southwest in the part of the city where he grew up, where he honed his political instincts, which at its border bumps up against Bayonne, where alot of the old Irish families relocated in the pendulum swing of population migration.

But McCann stayed in Jersey City, stayed and made his career, serving two terms as mayor before running afoul of the law in the 1990s, spending two years in the can, and resurfacing on the School  Board in 2007.

“When is a man forgiven?” he asks, as he drives into another netherworld concentration of voters. “God says there’s a limit to a man’s punishment, but Steve Fulop says it’s forever.”

Running for re-election to the board with ally School Board member Terry Dehere, McCann says Ward E Councilman Steve Fulop made the race about McCann, and now, with two hours to go before the polls close, McCann says he’s happy to oblige.

While McCann works his base, Fulop grabs hands as people emerge at the downtown Grove Street station.

Beside him – in a brillant green and black tie that matches the Fulop Team’s campaign lit – stands Sterling Waterman, a Fulop ally who, like School Board Member Angel Valentin, another candidate on Fulop’s School Board ticket, is backed by the local teachers’ union.

Only Carol Lester doesn’t have the teachers’ union’s support as she vies for one of three vacant seats, but the fact that the self-proclaimed reform man and vouchers advocate Fulop built an alliance with labor makes McCann seethe.

“This guy’s saying principles don’t mean anything, it’s just like his partnership with Tommy Bertoli, and all the other disgarded Manzo people running Fulop’s operation,” says the former mayor.

Fulop’s counter-argument is that he’d rather align with the teachers’ union than watch a felon get re-elected to the School Board.

“This is a convicted felon who preys on senior citizens,” says Fulop, a reference to McCann’s track record of collecting absentee ballots in nursing homes. “This is gutter, Jersey City politics. At the end of the day, he’s a felon. Period. He’s not going away, that’s the sad thing about it, but we’re going to catch him or Dehere, if not both.

“While I’m a school choice guy, this makes a lot of political sense for today,” he adds. “I’m looking at the big picture, and things are trending in the right direction.”

McCann knows Fulop’s gauging his chances citywide in this election, with one eye on McCann’s School Board ally (and relative) Sean Conners, whose political tutelage under McCann inevitably puts him on a collision course with Fulop.

“He can’t get out of downtown,” McCann says of his adversary. “He beat Guy Catrillo downtown. That’s the only thing this guy ever did. He wants to run around bragging that he beat Junior Maldonado?”

Fulop reports high turnout in the areas he considers his strong points: downtown, obviously, and the Heights.

But McCann says the younger man’s campaign tactics are backfiring.

“This is one of those elections where I go into places and I get the nod and the wink and the thumbs up sign, I feel very good,” he says. “I went into a woman’s room in a nursing home and she told me, ‘Gerry, I got your call, I voted for you.’ I told her, ‘Dear, I didn’t call you.’ She told me, ‘Sure you did, that machine.’ Then I realized, this was a robocall from Fulop. She thought the machine was telling her to vote for me. She heard the name. She didn’t pay attention to any of the negative stuff.” 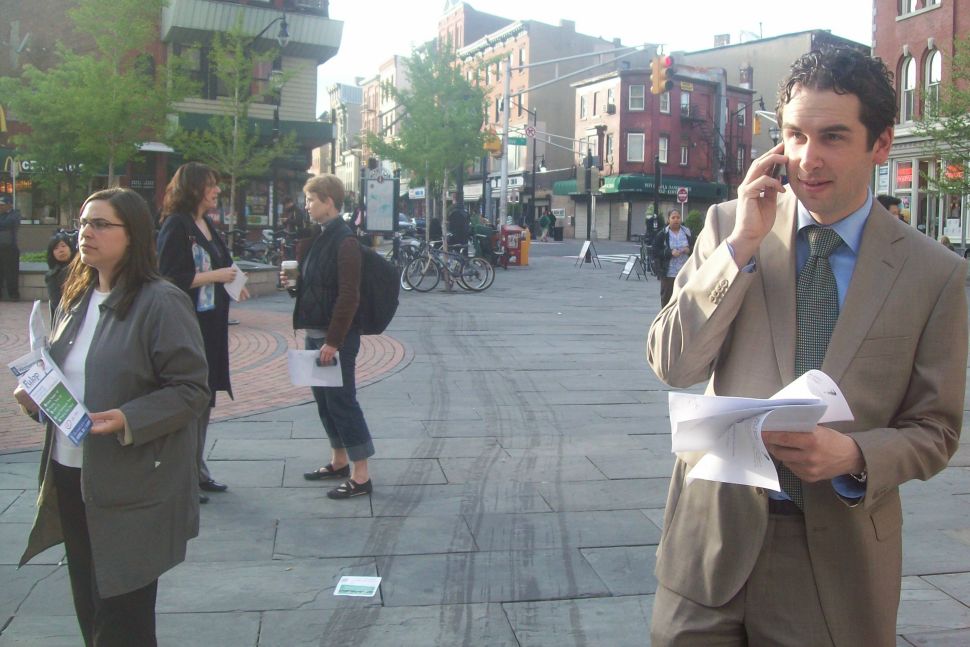