In a defamation lawsuit filed Friday, McCarthy targeted James, Baraka and Minor, charging them with issuing the mailers alleging that he and his New York contacts are not only making money off of Newark, but, in the case of McCarthy, “impregnating young females.” One of the pieces identifies the responsible party as “The Minor Team.”

“Clearly that’s not us,” explained James. “We’re not running as the Minor Team, we’re running as Newark’s Choice.”

Minor, Baraka and James maintained that the mayor’s political people fabricated the connection with them to keep them tied up in court for the duration of the campaign.

“This is a tactic they’re using because they think we can’t afford a lawyer,” said Minor.

Baraka added, “I don’t have any extra money to give it to a campaign to get rid of Mr. McCarthy. It’s easier for me to just win the council seat and say McCarthy has to go from an elected position, as opposed to me putting out corny pieces of mail. The problem is whether we win in court or not is a moot point. We have to spend our resources and our emotional energy dealing with it.”

“I’m sure you will find lurking in the wings Pablo Fonseca and some other slippery individuals,” Baraka said.

James prompted applause from the crowd here at his headquarters when he called for election monitors on Election Day, May 11th, “to make sure the residents of Newark have the right to vote and are not intimidated.”

While the other side engages in games, said the son of former Mayor Sharpe James, “We have been focused on issues this entire campaign, and my issue is the budget.

“Mayor Booker had an opportunity during the State of the City to discuss the budget,” he added. “We’ve done our own research and the bottom line is there is a $140 million budget deficit, and there are layoffs – the threat of 600 layoffs, and this is coming from inside City Hall.”

At-Large candidate David Blount said of the Newark’s Choice ticket, “We’re winning this race, and that’s why they have to resort to these tactics.” 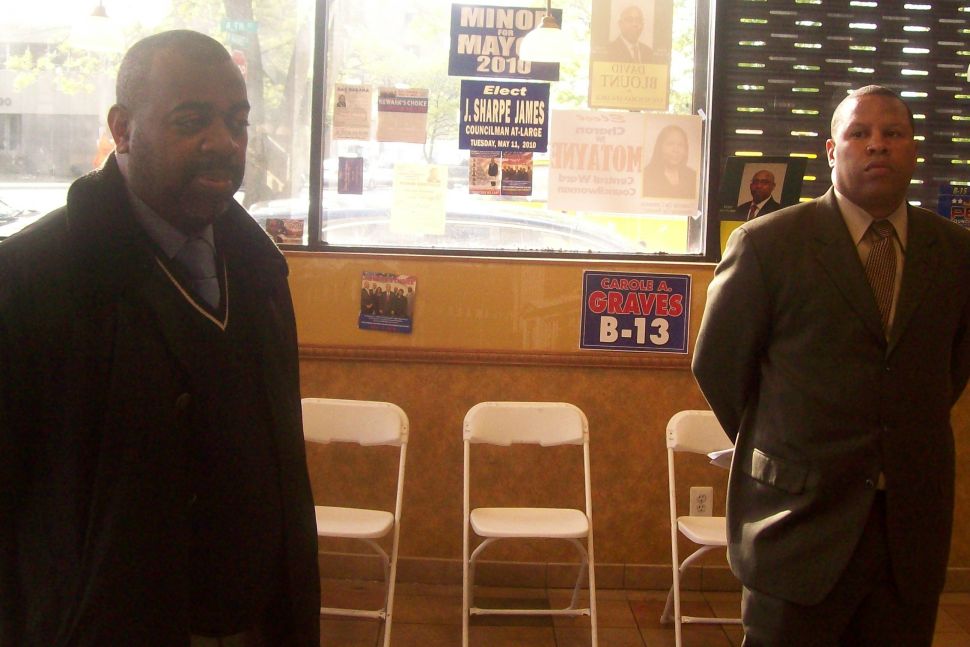