NEWARK – Mourners filled the Cathedral Basilica of the Sacred Heart this morning to honor U.S. Rep. Bob Franks, who died last week at age 58, and who left a legacy of joy and vigor in New Jersey politics that won him the respect and friendship of an entire era.

The stories about the late congressman who came within three points of defeating Corzine in their 2000 Senate race despite a severe monetary disadvantage, to a one proclaimed Mr. Franks’s keen strategic ability, political animal instincts, policy smarts, and fun-loving and daring sense of life – all overarched by his love and devotion to family.

His widow Fran and their three young daughters sat in the front row of the massive Newark cathedral. At the end of the ceremony, Fran Franks received the colors from Major General Glenn K. Reith, adjutant general of New Jersey.

Seated beside the governors on the altar today were the godfathers of Kelly, Sara and Abigail Franks, respectively former Congressman John Kasich, the Honorable Alfred Fasola, and the Honorable Roger Bodman, who eulogized their late friend, and stood together to pledge their allegiance to the girls and to the Franks family.

“Bob Franks knew full well the demands of public and private life and the rewards of paying attention to both,” said Christie, who first met Franks in 1995 after placing a dismal sixth out of six competitors in his infamous Morris County Freeholder re-election bid.

The congressman called Christie to his office and spent one hour and 45 minutes dissecting why the momentarily derailed up-and-comer had lost the race.

“I had never met him, but he saw something in me in that campaign, that obviously no one else who voted did,” said the governor. “He told me not to give up on public life.”

They would maintain a friendship and political connection for the next fifteen years, intensified in 2009 as Christie ran against Mr. Franks’s old conquerer, Corzine.

Son of a B-17 WWII hero pilot, a regular guy with a magnetic and unforgettable smile who liked Bud Lite and Lone Star, restaurants where the tables don’t have tablecloths; who maintained a defiant dedication to the Indianpolis Colts despite everyone else’s regional bewilderment in that fact, Franks lost to Corzine but, as was his way, proved irrepressible to even his fiercest opponent.

They became friends. They attended the same church in Summit, where they both lived.

Trying to figure out how he was going to play that divide in his congregation, the Rev. Charles Rush, senior minister of Christ Church, remembered looking out and seeing Franks partisans on one side and Corzine people on the other and thinking his best delivery might have been to look at one group and say, “The Lord is with you,” then look to the other quickly and himself supply the rejoinder, “and also with you.”

In the final weeks of Mr. Franks’s life, Rush and Corzine went to his hospital room in Memorial Sloan Kettering Hospital in New York.

“You’re a fighter, Bob, no one knows that better than I,” Corzine told his rival turned friend, before they prayed.

The defeated governor happily recalled one 2000 debate session with Mr. Franks. After chatting amiably in the lead-up to their encounter, the Republican, in Corzine’s words, mercilessly took him apart, smiling only when he dubbed Corzine, ever the faithful progressive, “Mr. Universal.”

“That was his secret weapon,” said former GOP Chairman Tom Wilson. “He was so nice that the opposition would forget they were running against him.”

Kean’s eulogy took the crowd back to Mr. Franks’s early days in politics, when he graduated from Summit High School and went to work for the future governor – a “pied piper,” who brought other young people with him to help the campaign, motivated by Mr. Franks’s enthusiasm for the cause.

The future state party chairman and congressman served as Kean’s first campaign manager, and on the trail, Kean said he remembers receiving calls of support.

Kean said he could not have been elected without Bob Franks.

“I think of his enthusiasm,” said the elder statesman, “and I envy the angels.”

Fran Franks with the colors and her daughters walked up and down the length of front row mourners at the end, shaking hands and hugging friends; smiling bravely, leaving many fighting tears, simultaneously struck by a sense of joy of the man departed, as they left the cathedral.

“The loss we feel is miniscule, compared to the loss his family feels,” said Christie.

In lieu of flowers, the Franks family has asked that any donations be directed to the New Jersey National Guard State Family Readiness Council, SFRC Post Office Box 5692, Trenton, New Jersey 08638, or by visiting http://www.nationalguardsfrc.org 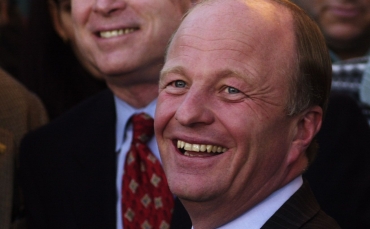