NEWARK – Disappointed with Mayor Cory Booker, a random scattershot of voters in the Central and West wards don’t know enough about challenger Clifford Minor to feel confident he would do better and some question his campaign trail passion, according to a PolitickerNJ.com straw poll conducted Saturday.

Voters in the Central Ward go back to 1997 with Booker, who then embarked on his first race for city council against ex-boxer Councilman George Branch.

Some remember the eyeball-to-eyeball promises made by the intense young upstart: promises that never came to fruition, they report with irritation. Others remember promises made but not delivered, but don’t care. Such is politics.

“The senator (Booker) is global – and I like that,” says one veteran Central Warder, a years-long supporter of Booker’s who does not intend to abandon the mayor as he seeks a second term.

Speaking on condition of anonymity, she proves one of two ardent Booker backers of 30 people quizzed on the May 11th mayor’s race (of the rest, 40% are soft Booker supporters, 35% soft Minor (or anti-Booker people) and the rest are either undecided or indifferent), in which Booker reports $2 million on-hand compared to just over $50,000 for Minor toward the closing two weeks of political combat.

“People complain they don’t see him (the mayor) around anymore, well, when he first started out, he campaigned where people hadn’t campaigned, did it the old way, door-to-door – and we need a mayor in this city who’s not just about putting poor folks on top of poor folks,” says the Booker backer, referring to new development in the Central Ward.

Another voter – a senior citizen at another table – is less forgiving.

“He never wrote that letter,” the woman adds.

But at this randomly selected table of seniors, she’s the only one.

“I’m a Booker gal,” says another, with an unapologetic grin.

Total at this table: three Booker, one Minor and one neither Booker nor Minor.

A third group of women adds up to one vote for Minor, one 75% with Minor, and two undecided.

“I’m leaning toward Clifford Minor,” says Lori Thomas. “He doesn’t have the oomph or the money, but so many people are fed up with Cory’s administration that I feel as though they might give Clifford a shot.

“There was a time when I loved Cory and I stil respect him, because he’s the mayor of Newark,” Thomas adds. “But he’s building up Newark Now so as to destory all the grassroots programs in Newark. Newark Now is going to be the umbrella, and everybody will have to fall into him. I think he’s using Newark to gain his strength and popularity so he can run for Christy creme’s position.”

In a telephone interview, “I believe what is most telling is there is not strong support for Cory Booker,” argues Central Ward candidate Charon Motayne, who’s running on the Newark’s Choice ticket supported by Minor. “There are no fervent supporters for Booker. And four years ago, there were.”

In the West Ward, at an event sponsored by the United Community Corporation, residents walk in and out of the community center in West Side Park. An all-women group of singers commands the gymnasium and they do a bass-heavy blues version of an old spirirtual that has the crowd clapping and swaying.

There’s a crowd of middle-aged people milling outside the open door.

“Booker,” says a man when asked who he supports for mayor.

Three other people – two women and one man – immediately protest.

“Booker!” a woman, hands on hips, gripes at close range. “Are you kidding?”

“I don’t expect him to be here everyday now that’s mayor,” he says.

The three who say they intend to vote for Minor add that the challenger has not demonstrated much as a campaigner. They’re not enthusiastic Minor backers.

“You have to go after it,” says a man in an Irish cap. “You have to show that you want it.”

Another man in his mid-20s plays with what appears to be his toddler daughter just outside the community center.

“I can’t vote for Minor,” he says of the former prosecutor. “Minor put my mother in jail. I plan to vote for Cory Booker, but if Sharpe James were in the race, I’d have to vote for my man Sharpe.”

A Central Ward source, speaking on condition of anonymity and absorbing the quote read over the phone, argues that the establishment aura around Minor – ex-cop, judge and prosecutor – weakens his ability to embody street-level anger.

“Wrong candidate at the wrong time,” the source – not a Booker fan – says of Minor.

Another man in the park says he doesn’t know enough about Minor.

“Haven’t heard anything,” he says.

Asked if he supports Booker, he shrugs.

“Where’s the entrance?” another guy asks, and someone tells him. He heads in that direction when a shouted question pulls him up short.

The man pivots and leans on a railing, leaning into the question.

“I know a lot of people are against Booker,” he says. “But I ask them all the time – you can do better? No, all I’m saying is that job is not easy. Not easy. I’m for Booker. At least he’s trying.”

A man identified as a local pastor receives the question with a smile.

“Politics, man, are you kidding me? I’ve been around for a while, and politics is just two sides beating each other up and the people losing. I never see Cory Booker around. But I don’t care. People get all upset. Look, that’s what politicians do. They run around. Like I care?”

Two young man, one wearing a bandana and the other wearing a baseball cap, look up as they walk away from the community center.

“Booker,” says a senior citizen, finishing a hot dog outside the community center. “I don’t live here anymore. I moved to Irvington, so I don’t vote here. But I see the work Booker’s doing. Pretty good. Pretty good.”

Back in the Central Ward, Roger Smith, a juvenile counselor at a youth house, wants Booker to win.

He gets an earful from a senior seated next to him.

“Hey, last time I checked, this is America – freedom of speech.”

Smith eyes another woman sitting on the other side of the table.

“What are you mumbling over there?”

“I said, ‘this from a person who doesn’t live in Newark.'”

“Born and grown up in this neighborhood right here,” says Smith. “I work here. I work in Newark and I was born and raised here and grew up in projects that were right here in this neighborhood. I was here in the riots. I was here when this whole area was bombed out. Cory was able to implement a lot of the plans Sharpe had on the table. You see more police protection now. He’s done an excellent job managing the city.” 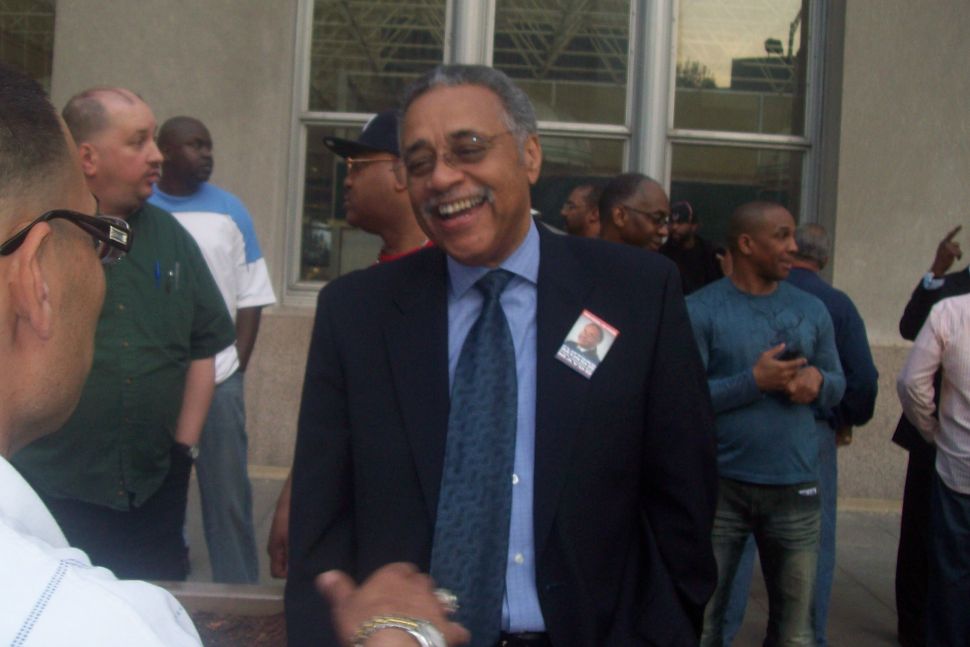