TRENTON – It was another tough night as Council President Paul Pintella left City Hall, turned the engine over, and drove by the Delaware River, where the Trenton Waterworks loomed.

The budget containing a 66 cent tax increase failed tonight, with Pintella voting in vain to move it forward along with Councilwoman Cordelia Staton, while the other five council people – including Pintella’s fellow mayoral hopefuls At-Large Councilman Annette Lartigue and At-Large Councilman Manuel Segura – voted it down.

It was yet another stab wound in a series of election year cuts that make it that much harder to be an elected official in Trenton, let alone the face of the local political establishment.

Had the council been able to sell the outlying pipes of the waterworks to American , as retiring Mayor Doug Palmer desired – the city could have landed $80 million: $40 million for debt service, and $40 million for its operating budget,and at least put itself in fighting shape in time for Gov. Chris Christie’s $43 million wallop to city aid.

Driving past the filtration plant reminded Pintella of how a judge killed the deal last week with his order that the sale needed to be a put to a referendum.

Bad news heaped on top of bad news, with four weeks until Election Day as his rivals privately write him off as politically mortally wounded as a consequence of power.

“The State of New Jersey will have to set our tax levy,” said Pintella, as he drove through his hometown along the river. “Most municipalities want to govern by home rule. When it’s taken away, it’s painful. It’s painful.”

But Pintella refuses to back down in the midst of what appears to be the ultimate bad weather scenario for an incumbent facing a field of nine other candidates who are heartened alone by virtue of not being either mayor or council president.

The way Pintella sees it, he’s in a death-rattling storm right now that few of the others could manage.

They may sound compelling in the more demagogic moments of campaign season.

But they have no workable plays.

“From a passion standpoint, it’s tough getting your message out in a crowded field publicly when most people are confused about the who-what-why-where, with so many in the race,” said the candidate. “At least for me, when I have chance to talk one-on-one people, see I understand the issues. It’s tough to galvanize, but in due course…”

The only time in the debates when the council president’s voice carries an edge is when he describes those who complain without acting: whether it’s young people on street corners who say there’s nothing to do while refusing to take advantage of the city’s sports and recreation programs; or parents who refuse to take responsibility for their children, or those political opponents descending on City Hall and attacking while advancing no alternatives.

“When Mr. Segura first came on the scene it took folks to literally hold his hand and maneuever him through this city,” said Pintella, an affirmative action specialist with the state. “All that has gone by the wayside. It’s all politics for him.

“But when I’m with him on Saturday shaking the hands of Little Leaguers, congratulating them on the upcoming season, and then on Sunday hear him say there are no recreation programs for the kids, the only thing I can conclude is he’ll say anything to get elected.

“Being mayor is about making tough choices, and I believe I have demonstrated that I can do that,” Pintella added. “Voters want to have some idea about their mayor or council. It’s easy to be a Monday morning quarterback. For folks to sit back and not comment on the budget while they’re running for mayor, you get that it; goes with the territory. But I give credit to the electorate. The people will make their choice based on what they know of the candidates’ abilities. These forums don’t avail themselves too much in terms of responses and rebuttals. One minute to answer a question about tax increases when this governor changed the rules with his budget cuts? Give me a break.

“People want to see if you’re a fighter. It’s not a job for the weak. I expect my record to be out there. There are many things we have done that this city has benefited from.”

Most obviously standing directly opposite Pintella on the field of mayoral contenders are, of course, Segura, and community activist Frank Weeden.

“I wouldn’t pass that budget,” Weeden said tonight, after the document failed. “That budget is still $14 million short.

“My main beef is that the administration is very top-heavy, top heavy with 20 years of upper-end salaries that are not justifiable,” added the candidate. “They (managers and department heads) took a ten percent raise while laying off city workers and trying to now exact a 66 cent tax hike. The mayor should take a pay cut before this budget passes. The prior administration didn’t have a chief of staff or a public relations officer.”

Those jobs should be gone prior to cuts and tax hikes, said Weeden, before taking a direct slash at Eric Jackson, another mayoral candidate and the city’s director of the Department of Public Works.

“Eic Jackson should be called out,” Weeden said. “What is his stand on taking a ten percent pay raise and laying off city workers?

The guy should be running and hiding and instead he’s running for mayor.”

As for Pintella, Weeden said the council president has simply not stood up to the mayor and made suggestions on where to cut.

“I view the budget as a complete unwillingness to cut on the administration level,” Weeden said. “Where has Paul been for the last three years, or over the last three council sessions? He was bickering over what to do about the city clerk position and in the meantime we don’t have a budget. We have two or three months left in the fiscal year, no budget, and an absurd state of affairs.”

“Mr. Weeden is a ‘caveman,'” said Pintella. “A ‘citizen against virtually everything.’ There is nothing you can do to appease him.”

At the end of Sunday’s League of Women Voters debate, Weeden told NJN television anchor Jim Hooker that the unasked question was what all the candidates have done.

Pintella said he would have been eager to answer.

“I would have talked about housing and development ribbon cuttings for folks in their new housing, economic development for new shopping centers; technology and services for firefighters; non-traditional recreation programs. On top of that, I would have said the ability to provide constituent services everything you do doesn’t require a press release or a press conference. It’s the little things people appreciate. It’s easy to say no.”

Coaching a baseball game while his rivals sweated the questions, Mack in general also appears to be seizing the advantage of being out of power, of not having to wrestle with what Pintella must as a consequence of having stuck with Palmer.

Mack’s gone through his own personal prodigal hell since his failed 2006 mayoral bid.

Two years ago, he stood very much alone in a roomful of Democratic County Committee members inside the Masonic Temple, the old Howard University wrestler trying not to get pinned, even as his eyes betrayed a politician’s panicked sense of the inevitable. Entreating, pleading, exhorting, he finally lost with finality to Hamilton’s John Cimino – as payback for running against Palmer.

Now it’s a revived Mack running the classic grassroots, outsider’s game against the machine, with a Facebook page brimming with nearly 5,000 friends, a forceful street presence and confidence.

“It’s over, baby,” Mack said last week as he embraced an onslaught of supporters on the corner of Broad and State.

“He’s out there pounding on doors,” he acknowledged of Mack, with no tone of admiration for the other’s apparent effort, as though the former freeholder is simply running thoughtlessly from door to door with little strategic purpose.

Mack may be stirring anti-establishment sentiment, but Pintella says his adversary coveted the endorsement Pintella received last week: that of CWA Local 1039.

“That endorsement means a number of Trentonians believe in my ability to run the city,” Pintella said. “Having worked in the state in that union for the last eight or nine years, people know me, and have been impressed with my ability and where the city is going. The resources in terms of people and finances will be a big boost. I was very humbled by it. I consider myself a working class person and no different from anybody else.”

Mack issued a list of Latino endorsements today, which the council president likewise absorbed with little sense of despair.

“The funny thing is I’m setting up my own Latinos endorsements,” he said.

The state takeover of the budget process might be liberating on one level with Election Day bearing down on his candidacy, but Pintella doesn’t mention that, instead voicing his hope that city officials will be able to work with Trenton’s state legislators to scale back Christie’s cuts.

The shambles of government go on, and in the wake of a seven-year old Trenton girl’s rape last month, mayoral candidate Shahid Watson on Saturday mobilized an anti-violence rally at the Lighthouse attended by hip hop Russell Simmons filled Pintella and visiting rap artists.

“That incident was horrific and tragic,” the candidate said of the gang rape. “I have two daughters I put my arms around everyday and tell them I love them. Those boys are pedophiles. Their lives are ruined, and once again the perception of city is damaged.

“We’ve lost young ladies to fire bombs, drive-by shootings. The frustration level to me is high. These things happen, we rally, but they don’t stop. My greatest fear is time will go by and we’ll be doing the same thing: rally, rally, and no end.

He returned to his main theme: the theme of his voice in government and of the campaign.

Whether candidates or parents or youth in this city where he was born and raised, “My biggest priority is for people to be responsible,” Pintella said. “Folks need to take personal responsibility and stop making excuses. The city can only stand so much. Most people who live and work here are churchgoers. It’s the same people who have created such a big aura of perception: perception of violence.

“When parents and young people take responsibility, that aura is altered. As mayor, it will be my responsibility to bring the city together – our churches and our civic leaders and our youth; to come together on a regular basis, not just in the din of a tragedy, but all the time. I didn’t want to show up at something because it’s convenient and political. But these things will not be tolerated, and I hope and pray they will never happen again.”

And another tough night in Trenton came to an end. 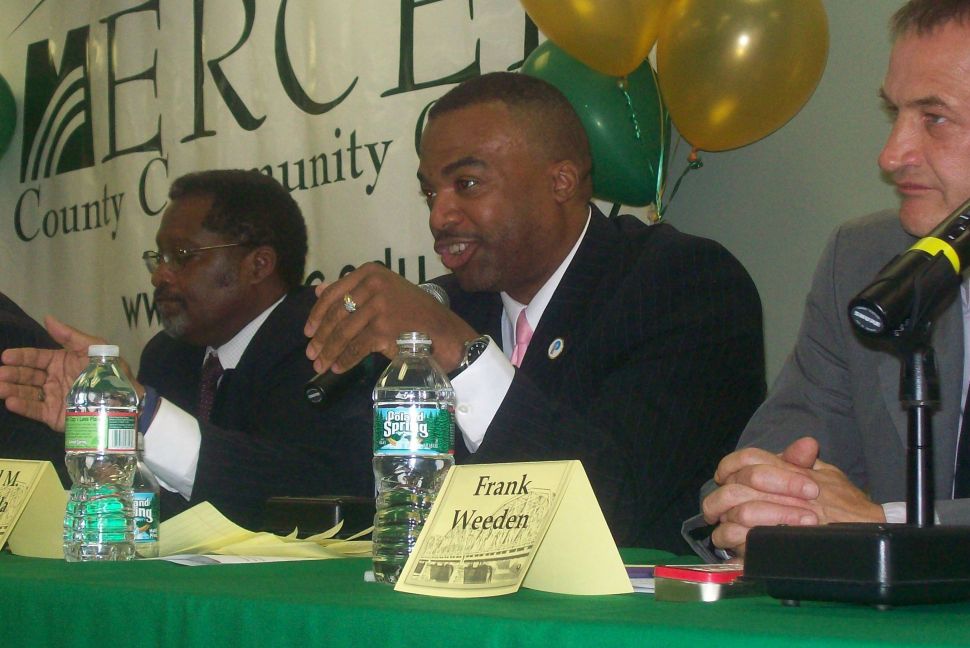