“To me the most dramatic part of his testimony was right there at the end, where he acknowledged that when you combine the governor’s school aid cut, his municipal aid cut, and the removal of the property tax rebates, what it adds up to is a $2.8 billion cut in property tax relief,” said Sarlo.

“I think that is just one of the most telling things about this proposed budget,” adds the Bergen County budget committee chairman. “We just heard that from a highly respected source.”

“These guys all want to forget the last eight years,” says the Republican senator. “You just can’t shut the door on how we got here. These guys took us from a $22 billion to a $33 billion budget in eight years.” 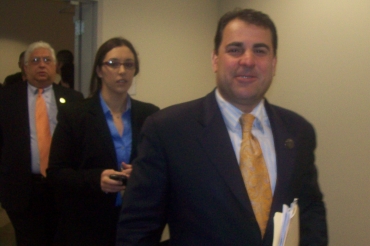