Then he thought of what it would be like to live in a town with upstart Councilman Brian Unger serving as mayor.

“I still love being mayor, but I had a reluctance about engaging in a campaign again,” he says, sitting in his political headquarters on Brighton Avenue and eating a salad, two blocks from the ocean.

At that moment, a mayor’s campaign worker inserts into the conversation the news nugget that the state Department of Community Affairs (DCA) is investigating Unger for going ape on a librarian, allegedly pulling a “do you know who I am?” temper tantrum when she refused to open the library for a Sunday community meeting.

“He offered me a bribe… Brian told me he is an important city official,” says the 2009 affidavit of librarian Ingrid Bruck, who adds that Unger then told her he could vote to enhance her budget.

The story, which hits the pages of the Asbury Park Press, builds Schneider’s case against his longtime adversary. Essentially it’s this: Unger doesn’t have the temperament to be mayor.

A courtroom lawyer by profession with his own law office in town, the fiercely competitive Schneider bludgeons Unger with the DCA story on the same week he runs a full page ad in the LINK News listing “the top lies of Brian Unger. This week we could only fit three!”

The word “bribe” in that affadavit comes with an edge, for Schneider has counter-attacked with this news following Unger’s distribution of a glossy mailer featuring a photo of notorious developer and FBI informant Solomon Dwek and noting his numerous campaign contributions to the mayor.

Running a grassroots insurgency against an entrenched incumbent who bulldozed Section 8 housing in favor of upscale commercial and residential development, the Unger ad’s connective tissue is simple: Schneider equals Dwek.

Schneider laughed off the piece at the time. Ridiculous. Typical Brian. Trying to create guilt by association.

Then he came back with this week’s double squirt of venom in Unger’s eyes: newspaper ad, newspaper story.

“There’s a lot less pressure on a councilman than there is on a mayor,” says Schneider, calmly taking another bite of his salad in a break between scheduled campaign events. “But Brian, backed against a wall with pressure of his own making, has said things about me that are dishonest. Not just me. It was city employees, not me, who gave him the nickname ‘Lyin’ Brian.’ This librarian was intimidated. There’s a pattern.”

A few blocks south on Ocean Boulevard and then inland a little, in a pocket of 1970’s era homes eclipsed now by McManisons and genuine mansions that have muscled out the oceanfront, Unger puts up his campaign signs on Thursday afternoon: “Unger Mayor.” A visual of the green wave of Long Branch rises behind the words.

They were once friends. In fact, years ago, Unger, who owns his own marketing and public relations business, served as a charged-up young lieutenant on Schneider’s campaign team.

Too many waves have crashed between then and the present. Probe each man for some underlying admission of affection for the other, and it isn’t there.

“He uses the metaphor of killing the other person, and I have to tell you, it’s very difficult to be in a race like that, but that’s what he thrives on,” Unger says of Schneider. “Every word out of his mouth is vicious. Almost every advertisement. He needs an enemy. I don’t know who’s better at this style of politics, Adam Schneider or Karl Rove.

“It’s not like we’re doing the same thing. We’re talking about legitimate public issues. We may criticize him, but it’s over taxes. It’s over eminent domain. It’s over accepting campaign contributions from felons.”

A self-described Buddhist poet and beatnik expert writing his PhD thesis on the subject, Unger the progressive and former Green Party member at the core of this campaign champions the middle class and working poor against the eminent domain incursions of what he sees as Schneider’s preferred big, ratable-rationalized corporate development.

The veteran surfer remembers the fit together feeling of Broadway and the old Long Branch Boardwalk, a symbiosis since defied by Schneider’s upscale Pier Village and power lunch visions for the city.

A Democrat in name only in a 4-1 Democrat city, “Newark by the sea,” goes the song, Schneider is Long Branch’s version of tricky Dick Nixon, reinventing himself in campaign season as an environmentalist with an Obama bent, according to Unger.

But the eminent domain issue remains. Schneider can’t escape it, in fact.

“We’ve talked to 2,000 to 2,500 residents in this campaign,” says the challenger, who in his renegade 2006 run for a council seat defeated a stand-in for another Schneider ally burned up in Operation Bid Rig.

“Eminent domain is top of mind, and people plan to give Adam Schneider the retribution that he earned. They want to pay him back. Culturally, he’s out of sync with this city, and people are just waiting for the chance. He refuses to pass an eminent domain ordinance. His own city council president just said publicly a couple of months ago, ‘Maybe we should pass an eminent domain ordinance,’ but the fact is he has more eminent domain planned for the Broadway corridor and for the lower Broadway redevelopment area outside the arts district, and he’s going to be able to do it because he refuses to let that legislation get introduced at city council.”

Addressing the mayor’s latest attack, Unger admits he has a temper, but maintains the librarian intentionally tried to bar the Jewish civic group he was pressing to have scheduled at the library as payback for his opposition to Schneider.

Unger’s wife was dying at the time. He was frazzled. At his wit’s end with grief and fatigue when the librarian told him she couldn’t make the event happen. The bribe charge is a joke, says the councilman, who has no allies on a governing body controlled by Schneider forces.

“I can’t make any changes in overtime, only Adam can or a majority of the city council,” says Unger. “If she sincerely felt she needed a little overtime to accomodate a public meeting, I certainly thought it was worthwhile. That was it. If you don’t get enough overtime, come to the city council. She acted like she had zero overtime. So talk to the council.”

He knows Schneider is advancing the argument that he can’t sit in the mayor’s chair, but counters it with evidence that he runs a successful business and the assertion that Schneider hardly projects the picture of stability.

“Adam is known as a bare-knuckle tough guy who has people at City Hall refer to him as ‘the Boss,’ and drives around town with a Number 1 license plate,” says Unger.

He welcomes the radical tag.

“You know, I shook Harvey Milk’s hand when he ran for the board of supervisors in San Francisco,” Unger says. “I was living there at the time. I shook his hand and I signed his petition, and I was very proud to do so. He was a great supervisor until he was assassinated. Bobby Kennedy, Martin Luther King, Harvey Milk: all demeaned for their idealism.

“When people say you don’t have the temperament, it’s a veiled kind of discrimination. You’re not cut from the white corporate cloth and therefore you can’t run the shop. But there many people in this town who could be mayor: Latinos and African Americans and women. Not just Adam Schneider, who’s occupied that position for 20 years. We’re ready for a transition.”

The latest hit jars him. He can’t hide it.

“I don’t like fighting,” Unger says, before adding with a willed note of campaign fire, “constantly.”

There are at least several Unger obstacles, or at least political challenges. There’s a third candidate in the mayor’s race with a similar platform as the councilman’s. Moreover, John Pallone, brother of U.S. Rep. Frank Pallone (D-Long Branch) and a defeated foe of Schneider’s who faded for years from the local political scene and bucking for a return, is running as an independent council candidate. Maybe a non-factor in the mayor’s race, but Pallone and Unger are both proud progressives. And yet, despite a longtime bitter relationship with Schneider, the congressman – and his brother – are staying neutral in the mayor’s race.

Back on Brighton, Schneider revels in the contest, but exudes no overconfidence.

He conciously runs as the underdog.

The mayor says he’s been knocking on doors. He went to the housing authority. People like the fact that he created the biggest city park in town on the north side. Secured Green Acres funding. The waterfront development Unger bemoans created jobs and a tax base and a foundation for future development in Long Branch. Crime is down. Taxes stable. Unger embarrassed Lisa Jackson by saying he spoke to her when she was head of the state Department of Environmental Protection. He didn’t, says Schneider.

“I need federal corportation to build the pier,” says the mayor. “You think Brian would be able to get federal help from Lisa Jackson?”

Fighting the brand of corporate mayor with no political legs left in the poor neighborhoods, no cred with blacks and incapable of putting an African American on his ticket, Schneider fights hard. First Latino police captain in the city. Number of women officers at an all-time high. Director of community and economic development: African American. Recreation department: African American. Bilingual emphasis at City Hall.

Eminent domain? He beat the issue already in his 2006 race. 98% of the properties for future development projects already acquired.

“I’m out there, working, and so far I’ve gotten only one ‘no thank you’ and one door slam in the face, otherwise, people want to talk to you. It’s ‘Adam’ not ‘mayor,’ that’s how you know.”

He knows the climate for incumbents: Mayor Doug Palmer in Trenton clocking 20 years and bailing; Joe Vas – circumstances different, of course, with the indictment impending at that point – blown out by a grassroots no-name two years ago.

The development of Broadway down by the waterfront, just west of Ocean Boulevard, is in jeopardy. A court ruling last week said the mayor may have run his course in flattening older structures for new. Then there’s the economy. No bank will loan for a large-scale project right now. They built Pier Village, and now everything’s stalled.

It adds up to a political tightrope for Schneider, and he knows it.

Politically, Schneider lives big with Pier Village and projected accompanying largescale development – and he could die big, if the rest of those development plans down there go belly up.

In addition to people angry in a bad economy, there are the people he’s personally angered.

“Any mayor,” Schneider says, pushing back his chair and heading for the door, to the next brace of hands he must shake and votes he must coax, “over a 20 year period, will have created enemies. I have.

“But,” he adds, “I’m pretty confident they won’t coalesce around Brian.” 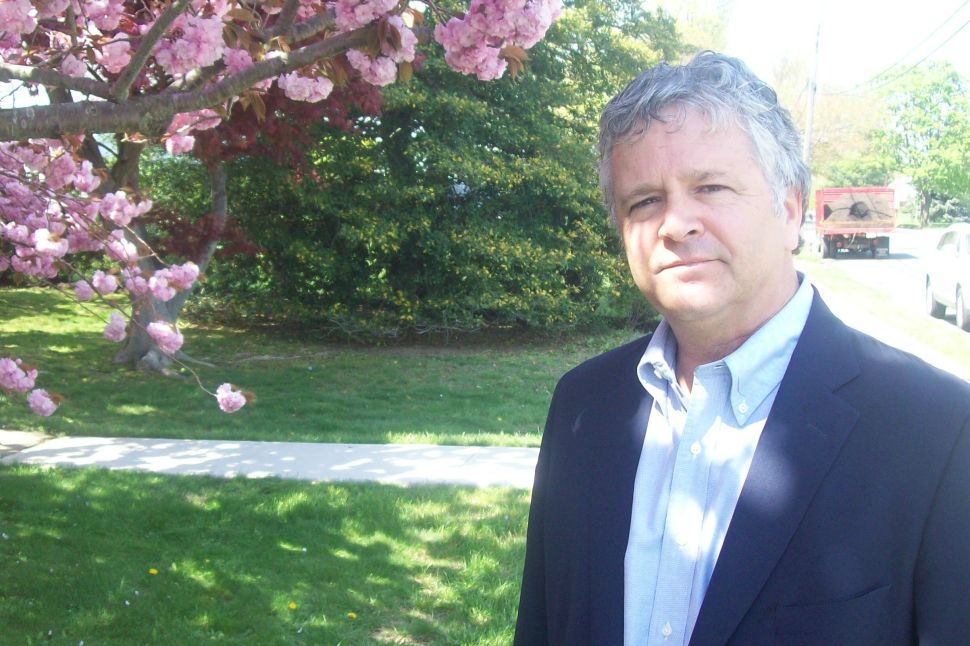