NEWARK – In a walk up at the edge of the Central Ward, Darrin and Ali Sharif sit at a table in headquarters with two weeks left to the day, one on a BlackBerry and one on a computer, trying to figure out how Darrin Sharif can win in the same ward their political operative father once helped Mayor Cory Booker win, back when Booker ran for city council.

That’s a tough subject for Darrin Sharif, who served as Booker’s chief of staff from 1998 to 2000.

The 48-year old director of operations for the Urban League of Essex County, son of political operative Carl Sharif, disapproves of Booker’s choice for the Central Ward, incumbent Councilman Charlie Bell, who stands counter to what Booker once stood for, in Sharif’s view.

No big deal ultimately, insists Sharif, relishing the chance to prove himself as an independent candidate, as he tries to run down Bell in a field of six candidates seeking the council seat in the city’s biggest ward.

Darrin Sharif: Newark is a college town. A month from now a lot of kids will be graduating and their families will be dressed to the nines, but very few of those kids will go to Rutgers. Very few will go to Essex County Community College. If they get into Essex County Community College, most of their aid will be gone as they take remedial courses.

PolitickerNJ.com: There’s a lot of chatter about charters. Steve Adubato built a charter school – or started a charter in the Central Ward. You have a governor advocating charters. Sen. Teresa Ruiz, chair of the budget committee. Shavar Jeffries, who just won the school board race. All these charter school proponents. Not to mention vouchers. The mayor, for example.

Sharif: Our kids in this city and in this state are entitled to a thorough and efficient education. If we’re saying we care about our kids, every single thing should be on the table, but I don’t want to get pigeon-holed as a vouchers proponent. The fact is our kids can’t compete, so what we ought to do instead of what we have now? Whatever the inefficiencies are in the system, I want to get to them. Right now, we don’t have serious conversations between the leadership on the council, administration and superintendent. That’s ridiculous.

PolitickerNJ.com: What did you think of Gov. Christie urging people to vote down those budgets lacking year-long teacher wage freezes?

Sharif: That’s really putting the squeeze on teachers and there could potentially be teachers retiring before August so their pension and health benefits stay intact. People think economically, well, we’re in the greatest economic downturn since the Great Depression and teachers should not in this environment be forced to make an economic decision which also has the consequence of hurting children in the classrooms.

PolitickerNJ.com: People say if you just recently moved back to Newark – a year ago – that you’re not connected to the city the way they are.

Sharif: I may have temporarily changed my zip code, but my commitment to this town has never wavered. I would like to speak to each and every person making that charge because I would ask them where were they in 1974 when I was 13 working on elections in this city, or 1983, getting the first latino elected, or in 1984 when we elected three people to the school board in a critical fight. Where were these people when I participated in all of those fights? I would say to them, I never left. I understand why people say that, because they have no record of performance.

PolitickerNJ.com: The mayor’s performance as he seeks another term?

Sharif: The one criticism I would make is I would say he’s not fully engaged and taken advantage of the most valuable resource in this city, which is the people. They’ve fallen very short. If he’s the mayor, I look forward to working with him, or Mr. Minor, or or Ms. Moore, or Ms. White. But let’s be clear, I’m running an independent campaign. I will have independence on the council. I’m very opposed to slates because you forfeit a certain amount of independence.

PolitickerNJ.com: Why do you think Councilman Bell needs to go?

Sharif: He doesn’t have a relationship with the people he claims to represent. Going back to June of 2009, 70 to 80 percent of the people I talk to either don’t know him or don’t like the job he’s done. When you look at his record of achievement, what he’s contributed to the Central Ward in Newark, it’s negligible. He served on the board of education for 25 years and it was under his leadership in July of 1995 that the state took over control of the city’s schools. He can’t point to anything tangible.

PolitickerNJ.com: You’re hitting him pretty hard with these mailers. He lied?

PolitickerNJ.com: Richard Whitten. Another one-time Booker ally running against Bell. Why couldn’t you two guys get together?

Sharif: I have enormous respect for Richard. We worked together on Cory’s staff. When we see each other at the forums, we’re laughing together and having fun trading notes, but this is a competition. I never talked to the mayor about being a candidate. On father’s day of last year, I came out of my house across the street from St. James Church and my car was blocked in by these two black SUVs. It was Cory Booker and Pablo Fonseca, looking for a house for the mayor. So out of this house come Pablo and the mayor and I told them, “I moved to a nice neighborhood with a nice house and cars are illegally parked, who can I call?” 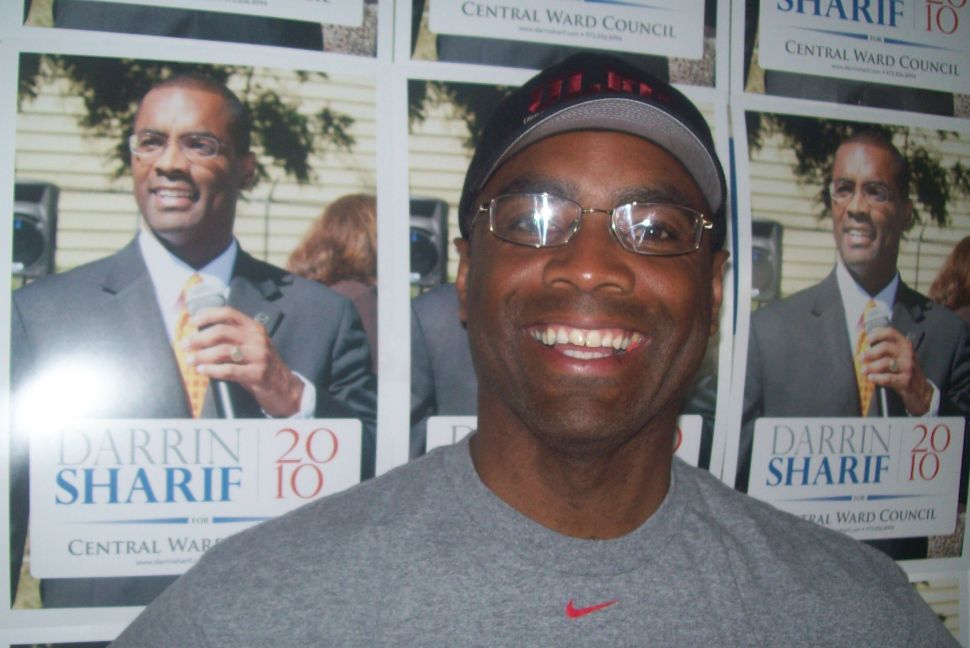