WEST ORANGE – A much anticipated mayoral debate with political implications at all levels is underway at the high school in this suburban Essex County town where voters failed the budget last week.

Councilman Robert Parisi, a Democrat who works in the insurance business, and securities professional John Schmidt, a Republican, sit onstage.

An ally of departing Mayor John McKeon and state Sen. Richard Codey (D-Roseland), Parisi has the task of defending tough terrain against an aggressive challenger who garnered 45% of the vore against McKeon in the last election.

The clash between these two men – one an affable politico who grew up in town, and the other a hard-nosed gadfly from Hudson County with an “R” next to his name – concentrates on one small stage a statewide fracas undertaken by Gov. Chris Christie against unions and government spending, which Schmidt embraces whole-heartedly, and which Parisi rejects.

“Mr. Parisi is a nice guy, but it’s been tax and spend for 12 years,” says Schmidt. “I will emphasize commercial development instead of more kids and more condos.”

“Leadership is not about standing atop the mountain and decrying the coming storm,” Parisi says “…I’ve been very proud of how I’ve represented my mother and father and the name they gave me. And I’m proud of my wife and children, and the name that I gave them. There are people who say these are dark days for our community. But they’re not. These are the dawning of our greatest success.”

“The reality is taxes in West Orange are not unique to West Orange,” adds the councilman. “Five of the last 11 years, West Orange has produced a zero percent increase. Seventeen percent of our non-uniformed work force has been reduced since 1998.”

A  long line forms at the microphone, mostly men in windbreakers with faces twisted in what appear to be expressions of urgency and borderline taxpayer agony on the heels of a rejected school budget containing a 7.3% tax hike – in addition to a 6% municipal tax hike.

“Questions from the audience,” announces the moderator with the League of Women Voters, the organization co-sponsoring this forum with the African Heritage Association.

The first turns out to be a question for Schmidt, and it establishes a pattern of public doubt projections about the man trying to buck the system in a town where Democrats outnumber Republicans, 12,888 to 2,981 and where Jon Corzine defeated Christie last year, 2-1.

“If you call yourself a watchdog on taxes, why did you file a frivolous lawsuit against the town that cost us thousands of dollars?” a man wants to know.

“Great question,” says the candidate. “Obviously you never read the decision. The judge who ajudicated the case never used the word frivolous. He ruled the case moot. Because of the lawsuit, the town removed the land in question from the redvelopment zone.”

He helped save the town from 250 units of residential housing, he argues.

Two more hardball questions go to Schmidt. Parisi grew up here. Has kids in the public schools. One gets the impression that people who have known him for years are ready to defend him.

Schmidt’s the relative newcomer originally from Hoboken whose political adversaries have branded a rich interloper with a local life experience mostly confined to condo functions.

“You complain, so much, why are you here?” a woman wants to know.

“West Orange is a beautiful community,” says the candidate. “We have great resources. We have the park system, which is designed by Frederick Olmstead. It’s unique in the state. If somebody is pointing out something systemically wrong, you do that because you care. You want something to get fixed.”

Hobbled last year when Codey lost his senate presidency in a coup masterminded in part by Essex County Executive Joe DiVincenzo, Democrats fear that a Parisi loss two weeks from now would mean one more shock to party infrastructure built by Codey and McKeon.

When Schmidt mentioned the parks in an earlier comment, it came across as an oblique reference to the beloved purview of DiVincenzo, but now he mentions the county executive outright as someone with whom he would like to work on government cost savings issues.

O’Toole wants to redistrict the 27th so that his longstanding rival Codey finds his own private political oblivion. If Schmidt beats Parisi, O’Toole, whose law offices are straight up Pompton Avenue in neighboring Verona, will have an ally in a town that was once Codey’s political inner sanctum.

But all of that is inside baseball right now, as yet another audience member serves Schmidt another hardball. 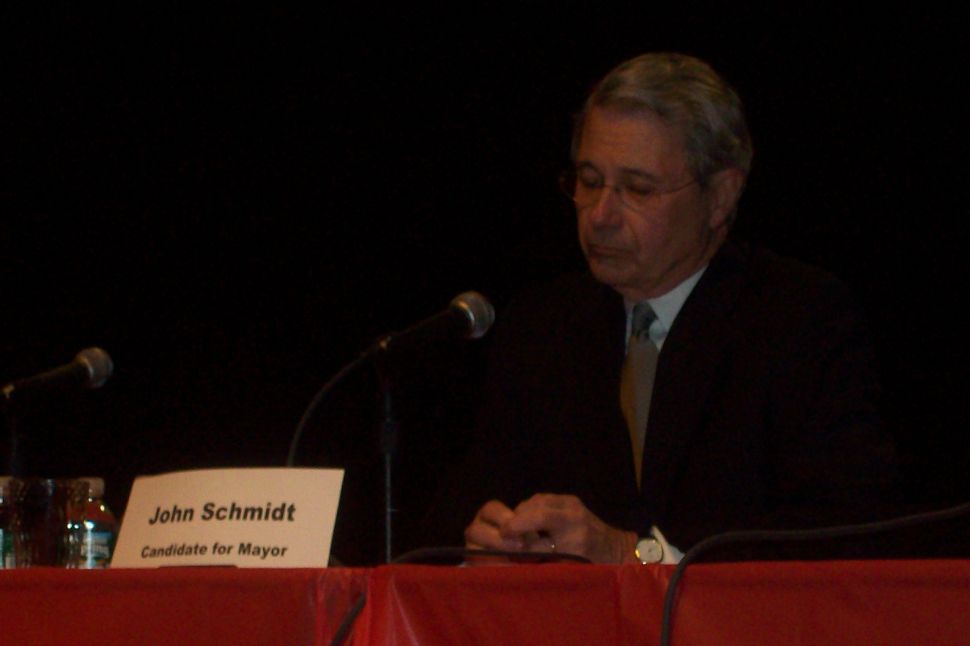