TRENTON – The mayor’s race just turned into the finale of a Marx Brothers movie, with two apparent frontrunners taking incessant body blows from at least three others in the crowded field as the establishment attempts to hang on to power.

With the city facing a $23 million deficit, 20-year Mayor Douglas Palmer last year announced he would leave office at the end of this, his fifth term.

Ten candidates sprang up to take his place, and the two who managed to define themselves as anti-Palmer, anti-establishment grassroots people over the course of the past month became the favorites in the eyes of the others.

Mack is Black in a field of eight Black candidates, and Segura is Latino.

In a PolitickerNJ.com straw poll of operatives and candidates speaking off the record, everyone says these two men are the favorites.

Mack’s base includes the disaffected, neglected and otherwise politically disconnected.

Stand with him on a downtown street corner and kids with baseball caps on backwards give him five and tell him he’s the man. An outstanding high school athlete who went on to wrestle for Howard University, Mack also has lifelong ties that leap ethnic boundaries. Earlier this month he presided over a solid array of Latino community activists – including friends from high school – who endorsed his candidacy.

A resident of Trenton for 25 years, Segura defined his political ground in this campaign as an opponent of the mayor’s waterworks sale proposal. Palmer allies grumble that he voted for it initially in a move reminiscent of Tony Chiappone’s vote for then-Bayonne Mayor Joe Doria’s incinerator project, before demagogically going to the front of the crowd in opposition.

But Segura has a Latino base in Chambersburg and an electric street presence. Capitalizing on longstanding ties to the State Democratic Party – and a personal friendship with Union City Mayor Brian P. Stack – he has raised the most money in the contest and his billboards tower over the city.

Palmer doesn’t want either one of these two elected, and fears a situation in which both of them make the runoff in what in his mind would amount to a mano-a-mano between his two worst nightmares.

The mayor started this stop Mack/Segura effort with three staunch allies, all of them candidates in the race to succeed him: Council President Paul Pintella, Department of Public Works Director Eric Jackson, and community activist/author Shahid Watson.

Each plays a strategic role in trying to weaken Segura – and demolish Mack.

If part of Mack’s base is the hip-hop crowd, Watson in his campaign set about drilling into that as aggressively as possible: inviting hip-hop mogul Russell Simmons to Trenton for an anti-violence rally, and seizing the moment in otherwise plodding debates to unleash his own outrageous brand of hoopla.

If Mack can get his inner preacher on, Watson can blot out a room with theatrical splendor.

Referring to misguided youth, “I’m no different than they are,” he told a room last night at a debate sponsored by the Board of Education.

In the middle sedate snooze-fest forums, Watson regularly suddenly goes nuclear on other candidates, setting off waves of laughter in audiences and – and this was visible last night -landing converts who crave a City Hall shake-up.

When Pintella last night said he would wrestle Trenton’s fair share of money from Gov. Chris Christie, Watson went on a tirade.

“I’m trying to be nice,” he said. “Gov. Christie is not going to listen to them. You think you’re going to demand that the governor pay his fair share. A governor you didn’t support is going to bow down to your demands? Get real! Get REAL! Gov. Jon Corzine wouldn’t give you Trenton’s fair share, what makes you think Gov. Christie will?”

Amid the giggles in the crowd, Mack at the other end of the podium stared into space.

He and Watson have a history that once spilled into the courtroom. They don’t like each other.

Now as Mack attempts to satisfy his longtime ambition of becoming mayor of Trenton, he must look one door down from his State Street headquarters at the campaign poster face of Watson, who very conveniently opened his headquarters next door to Mack’s. Whenever Mack tries to hit those high notes of anti-establishment outrage, he must inevitably relinquish the microphone and hear Watson up the eloquence ante.

Street presence with the young people?

Watson brought in Simmons and a coterie of rappers for a youth-centered, grassroots bash.

As Watson – who with his short stature even slightly resembles Mack – continually targets Mack’s base and attempts to become his complete political doppelganger by May 11th Election Day – the Pintella campaign this week unloaded opposition research onto the pages of the city’s two newspapers.

Mack was fired from his job as business administrator at Barrington High School. His last mayoral campaign drove him into debt and resulted in numerous bounced checks.

Problems from the past plague his campaign now as his highly effective campaign manager, Paul Harris, parted company with Mack last week.

Harris won’t talk about the break, but sources say the candidate and his campaign manager had differences over payment.

So the argument runs like this: If Mack can’t balance his own checkbook, and manage his own campaign, how can he run a city that’s broke?

While Pintella and Watson drove their one-two attack against Mack, Jackson yesterday at a podium in his downtown headquarters went straight at Segura.

“How can he fulfill the demands of a fulltime job when he’s receiving disability compensation right now?” Jackson asked. “Right now Manny’s on fulltime disability for the State of New Jersey, which raises the eligibility question. If you’re not able to work a traditional nine to five job, two things: how are you out on this vigorous course everyday campaigning, which is a lot of work? Then, if you are able to be elected, how then do you turn off the eligibility you have been paid monthly for the last number of years to say that now I’m able to take on such a rigorous host of responsibilities? Physically draining. Time demanding. How do you do that?”

The rumor of the week was Jackson would drop out of the race and back Pintella, whose 16 years on the council give him a natural establishment base – a base that incorporates some of Jackson’s core support: city workers and DPW employees.

“No, he didn’t ask me to leave the race,” Jackson told PolitickerNJ.com.

Sources say Pintella can play the job card with Jackson. If one of the two of them doesn’t win and either Mack or Segura gets in, there’s bound to be a City Hall overhaul.

Pintella has the backing of Communications Workers of America 1039 and this week brought in a television sound truck depicting motion picture moments from the life of Paul Pintella.

But sources say the council president’s inability to raise money, yield new voters in a toxic environment for incumbents worsened for him by the unpopularity of the waterworks sale – which he supports – his longstanding ties to Palmer, and Jackson’s steadfast cohesion of DPW workers, all cause panic in the Pintella camp.

“No longer a factor in this race,” grassroots diehard candidate Frank Weeden said of Pintella this week.

Still, Pintella’s supporters count on the labor backing and his built-in base, the presence of ten candidates in the race, and their three-pronged strategy to keep them afloat headed toward Election Day. A worry – and this accounts for Jackson’s attack on Segura – is that a public referendum question on the waterworks sale – will empower Segura in the June runoff, if Pintella manages to squeak into contention.

Their other fear is Mack joining forces with Segura in a runoff, but that’s not as pressing as their bigger agony, which is that right now – it still looks like Mack versus Segura, with Palmer’s plans in jeopardy unless his allies can break apart the Mack campaign between now and Election Day. 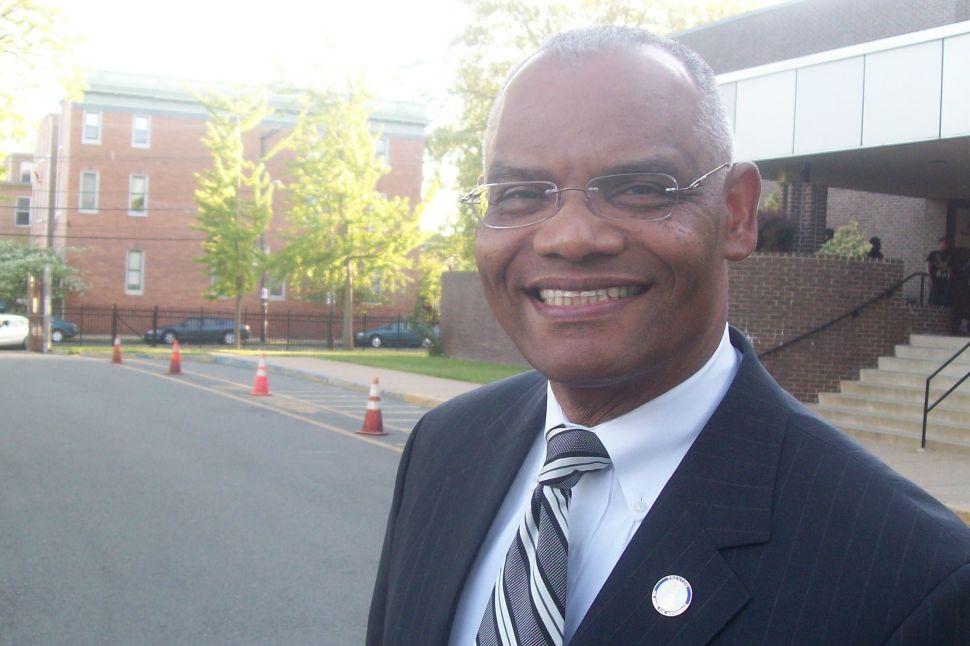