NEWARK – The absence of Councilman Charles Bell from a rigorous series of debate forums and a barrage of attacks on the councilman intensify the central ward race among the field of challengers, which includes two former chiefs of staff of Mayor Cory Booker, who are infuriated by the mayor’s alliance with the old school Bell.

“This mayor is trying to promote himself on the national stage, but if you’re not going to be here you need to have people here who can run things, especially if you ran on a platform of reform,” says Richard Whitten, who once ran Booker’s council office, campaigning against his old boss in Central High School over the weekend.

Fired by Booker, Whitten says the Bell-Booker symbiosis represents yet another fatal compromise at City Hall.

“The mayor once said he would eliminate the deputy mayor, a position with a salary of $90,000 under Sharpe,” says Whitten, who campaigned with Booker at the beginning, and, in fact, introduced Booker to future (and now former) Central Ward Councilwoman Dana Rone, for whom Whitten also worked as chief of staff.

“Now his deputy mayor of community engagement makes $115,000,” Whitten says. “He has three deputy chiefs of staff, and some of those positions were made by executive order. Meanwhile, no raises for people making $32,000.”

“Question: if you were caught lying on your resume, would you be fired from your job?” reads a Sharif glossy that hit mailboxes over the weekend. “Charlie Bell lied! Bell’s online biography said he graduated from Rutgers University and Newark College of Engineering. But neither is true. …On May 11, fire Charlie Bell!”

A picture of a tortured-looking Bell accompanies the bold red and black lettering.

A third candidate, Charon Motayne, running for the Central Ward seat on a team headed by former Judge Clifford Minor, criticizes both Bell and Booker, in bed together, she believes, to accelerate Central Ward development for Booker’s political contributors with as little scrutiny as possible from the public.

She also targets Sharif, who just recently resurfaced in the Central Ward, she says, and is an unknown.

“He was chief of staff for Cory Booker in the Central War, and  no one ever knew he was chief of staff,” Motayne says. “He wasn’t visible. If you feel the mayor did such a great job you should be able to use that as part of your record. But he didn’t live in the City of Newark until less than a year ago. We’ve just had enough of it. We need indivuduals who have something to say relative to their work experience.”

In the meantime, she’ll take the Sharif mailings going after the incumbent councilman.

“Carl digs and dishes dirt, that’s what he does,” she says of her opponent’s father. “It gets really rauchy and downright horrid… If he didn’t do it, it would look suspicious.”

Bell’s brain trust says the other combatants, while vocal at the forums, will dispose of one another, enabling their candidate to hit the 50% plus one mark to avoid a run-off.

But his adversaries see a way to win this biggest and most populous Newark ward, where the bulk of new development has occured and where more is slated, where the conditions include volatility and a sense of transience amid unfinished big residential and retail projects.

A veteran of the Sharpe James era who transitioned to become the latest addition to the Booker Team, Bell’s base tradionally includes senior voters who live in the high rises and compose 45% of the Central Ward’s voting population.

His weak points may be among new residents – about 15 to 20% of the population, and a general population that includes nearly 30% of Latino voters concentrated in the northern part of the ward.

Bell’s people say no way. He’s got the lionshare of that locked up, too.

The Latino area is controlled by district leaders under the auspices of North Ward Democratic leader Steve Adubato, a Booker supporter. If Adubato’s allies bullet vote the Booker team, that will give Bell significant leverage and make him very difficult to beat.

Among the challengers, Whitten represents the biggest obstacle to Bell maintaining his base – at least on paper. For years, Whitten handled constituent outreach in the Central Ward. He knows well the hallways of the senior high-rises and the public schools. People – seniors and parents of school-aged children – know him.

“We’re being very strategic with the money,” he says.

There are others in the race – “the more the merrier,” gloats a Bell ally: former 2008 candidates Juanita Winslow and Gregory Good.

“There’s palpable anti-administration sentiment out there,” says Good. “Cory Booker is seen as an outsider. I’m educated and from Newark. I’m a fourth generation Newark Central Ward resident. I’m speaking from a place Cory Booker could never speak. I’m running for the residents of the Central Ward. We need more affordable housing here.

“It’s about stopping this administration from putting the Central Ward up for sale – $500 million of development, market rate housing is projected here in a ward dominated historically by affordable housing,” adds the candidate.

In another part of the city, Whitten jumps in a car with a stack of campaign glossies in his hand. His father, Richard Whitten I, starts the engine.

“This administration has touted that they would get rid of the cronyism,” says the candidate.

“I told you, Richard, the only thing that’s changed from the Sharpe James years, is the letterhead,” says the father.

The car drives past the smiling face of Darrin Sharif.

That other former chief-of-staff.

There are those who insist Whitten and Sharif are simply spoilers, in the race to help the Booker Team divide and conquer. But insiders with knowledge of both Whitten and Sharif say it’s not true. These young men with histories interwoven going back to 1997 and the roots of a youth movement galvanized by Booker, believed 2010 was their time.

But Bell – his picture counter-balanced hugely by Booker’s in the councilman’s downtown campaign headquarters – blotted out that easier pathway.

Mutually stung, Whitten and Sharif couldn’t reach a deal. Their supporters off-the-record cringe at the notion that they’re both in the contest, in effect eliminating each other.

“One needed to have backed the other,” says a Central Ward insider. “‘You run and I’ll support you, I’ll be the chief of staff,’ that’s what they needed to have done, but they didn’t. This isn’t the Booker Team dividing and conquering. It’s ego. Ego.”

“Darrin and Richard are both playing the same old song over again,” says the longshot candidate. “Neither one is forwarding great ideas. For them not to have the next great idea – as long as they have worked to get to the point where they would run – it’s a shame.”

Thirteen years ago, Whitten walked Booker, the new young Rhodes scholar from out of town, around to the doors no one ever knocked, the doors the elder Sharif said the kid had to hit to win credibility in the hardest knocked neighborhoods. Those closest to Whitten insist his candidacy has the most purity in the face of a remade City Hall, where many of Booker’s department heads are not from Newark, and where Booker and Bell converge cynically.

They remember Whitten, 49 now and intent on his own shot.

How many will remember hard enough is another question.

“Booker’s people don’t believe in grassroots people,” says the candidate, bitterly, heading up the sidewalk, carrying a stack of “Richard Whitten for Central Ward council” handouts and seeking the support of the people. 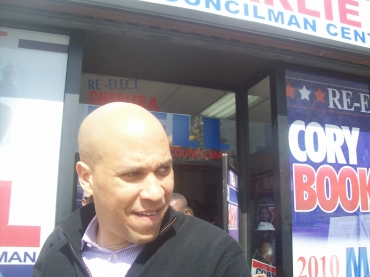