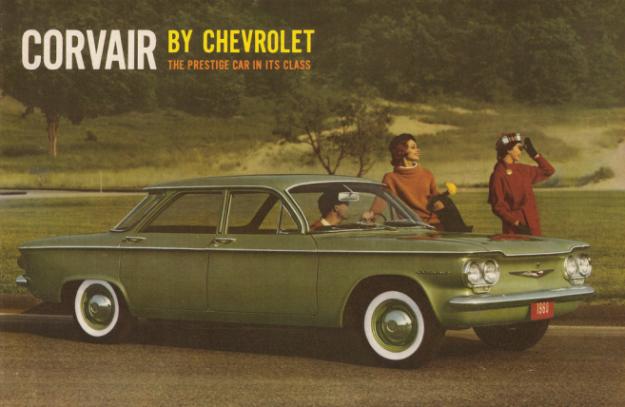 Sales Pitch: “The Greatest Show on Worth”

Safety Claim: Cost-saving suspension design meant the driver could easily lose control of the rear-engine car.  Oh, and the single-piece steering column was also said to be at risk of impaling the driver.

Fact-Check: Nader was right that the suspension design was aimed at saving money, but a National Highway Traffic Safety Administration study found that potential handling problems were exaggerated. The NHTSA went so far as to say the car’s handling was “at least as good” as that of other contemporary vehicles. 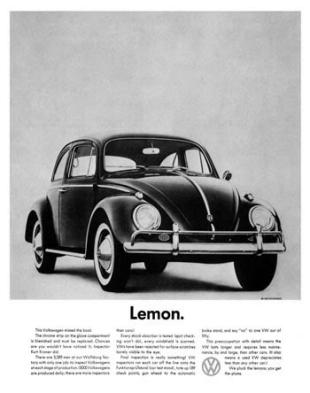 Safety Claim: The car’s windshield wiper arms were liable to work themselves loose and fly off the car.

Media Coverage: Ralph Nader claimed the company’s design failures made their cars “so unsafe” they should be permanently barred from the road.

Fact-Check: The NHTSA saw a safety threat in the loose wipers, and ordered a recall of all Beetles built between 1949 and 1969, which amounted to 3.7 million vehicles.

End Result: VW offered to fix customers’ windshield wipers, but refused to pay for the repair because it didn’t see the issue as a significant safety risk. This so enraged some members of Congress that they drafted legislation to compel payment, though the bills never reached the voting stage. 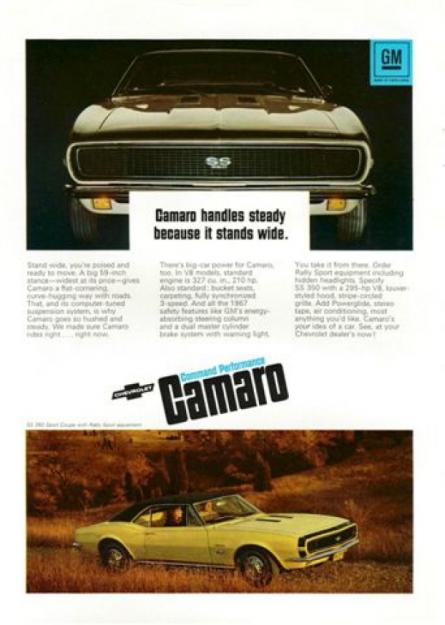 Sales Pitch: “Everybody Wants to Find Ways to Make Driving Safer – General Motors Is Doing It.”

Safety Claim: The engine mount would separate from the rest of the car, causing unintended acceleration and loss of control.

Model Years Affected: Various models between 1965 and 1969, including the Camaro (pictured).

Media Coverage: “Scores of engines on Chevies made from 1965 to 1969… were twisting loose from car frames, sometimes with the frightening result that the auto's accelerator pedal was pulled all the way down to the floor and the brakes failed,” “The Largest Recall,” Time, December 13, 1971.

Fact-Check: Nader again sprung into action, this time because the NHTSA apparently ignored mounting evidence that came directly from GM. He tipped off Robert Irvin, a friend at the Detroit News, who wrote 35 articles about the problem and stirred the desired public outcry.

End Result: A recall of 6.7 million vehicles, the country’s largest at the time. GM managed to find a quick fix and in the end the recall only cost about $1 per vehicle. 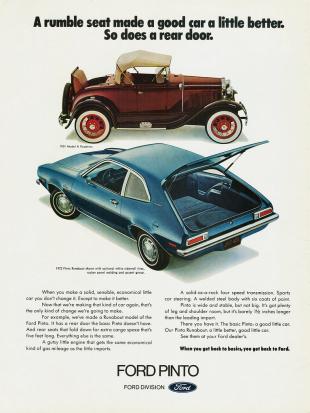 Safety Claim: The car’s gas tank could easily be damaged in a rear-end collision, leading to a fiery death for anyone inside.

Fact-Check: Court cases found the design to be undeniably dangerous, and the NHTSA eventually put pressure on Ford to recall the car. Depending on whose numbers you trust, the Pinto was ultimately responsible for anywhere between 180 and 900 deaths.

End Result: Aside from the aforementioned body count, a 1978 recall and the death of the model by 1980. 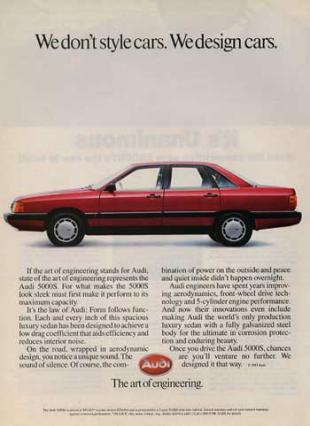 Sales Pitch: “The Art of Engineering”

Safety Claim: The car was supposedly prone to bouts of sudden unintended acceleration where slamming on the brakes with all one’s might had no effect.

Media Coverage: “Out of Control,” a 1986 60 Minutes’ report that featured footage of the brake pedal failing to stop the car.

Fact-Check: Audi maintained that most cases of unintended acceleration could be attributed to driver error—i.e., stepping on the gas instead of the brakes—and the NHTSA agreed with the company, recommending no recall. It was later revealed that the out-of-control Audi seen on 60 Minutes had been modified to produce those results.

End Result: Annual sales dropped off 85 percent due to the perception that the cars were runaway death traps. In 1989 Audi shrewdly changed the model name to a different random number, calling new versions the Audi 100 and Audi 200. Sales were back to normal by 2000. 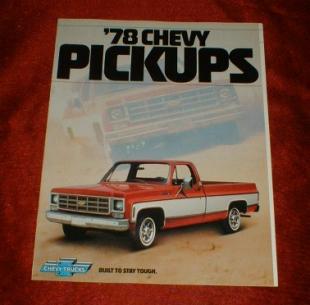 Safety Claim: Fuel tank design left them vulnerable to puncture during even low-speed accidents, leading to explosions and post-collision fires

Media Coverage: “Waiting to Explode,” a 1992 Dateline segment that staged a side-impact crash and the captured the resulting fire afterwards.

Fact-Check: While plenty sensational, the Dateline segment was also completely staged. The flaming truck had been outfitted with explosives that, on close inspection of the video, actually ignited a split second before the crash impact. GM sued NBC over the piece and settled out of court, but a later NHTSA study found that the risk of burning to death was in fact much higher in GM trucks.

End Result: The company came to an agreement with the government and avoided a recall by paying a fine of $51.4 million, which went toward auto safety programs and research. 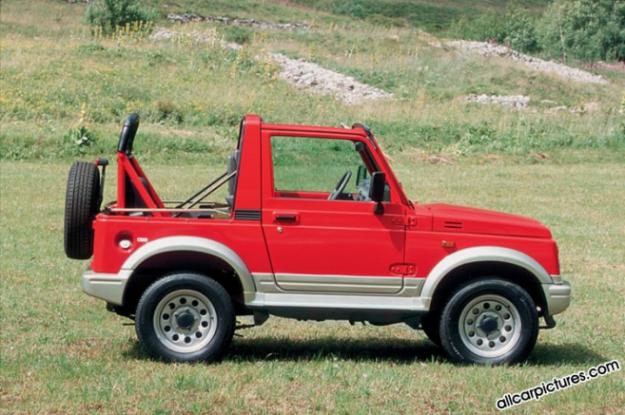 Safety Claim: The zippy ur-SUV was thought to suffer from a dangerously high rollover rate.

Media Flare-Up: Consumer Reports published a test of the 1988 Samurai that alleged the vehicle “easily rolls over in turns” and described a review Samurai tilting up on two wheels. The magazine even went so far as to ask the NHTSA for a recall, which led to immediate panic and decreased sales.

Fact-Check: Suzuki sued Consumer Reports in 1996 for damaging the car’s reputation and pointed to the fact that, well, don't all SUV's suffer from high rollover rates?

Effects: The lawsuit was bitterly fought until 2004, when both sides backed down, but the car was dead by 1995. 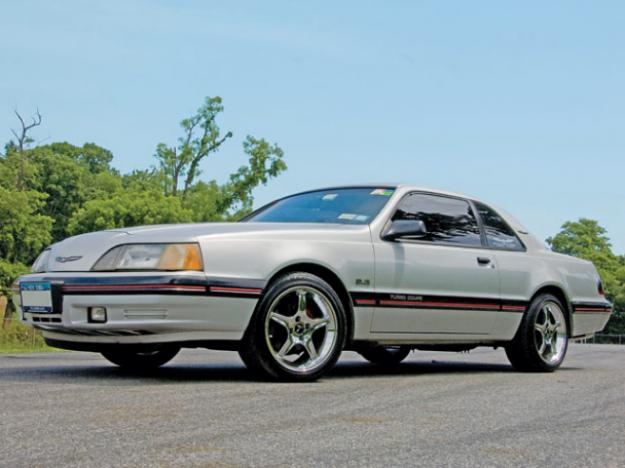 Safety Claim: A faulty ignition switch would cause certain models to burst in to flames, even when the car wasn’t running.

Media Coverage: The news was awash with stories of longtime Ford owners whose cars had a tendency to self-ignite.

Fact-Check: A leaked internal memo from 1995 revealed that Ford was aware of a “very small potential” of ignition fires.

Sales Pitch: "It’s a Miracle!" (As exclaimed by a young Leo DiCaprio in this Japanese ad.)

Safety Claim: Broken pieces on the cars’ seatbelt latches could cause the restraints to unbuckle during a crash.

Models Affected: Civics, Accords, Preludes, and some Acuras including the Legend, Integra and NSX, manufactured between 1986 and 1991.

Media Coverage: Minimal, other than sensible news reports along the lines of “Some Safety Belts May Not Be Safe At All,” New Orleans Times-Picayune, July 28, 1995

Fact-Check: In 1995 the Transportation Department announced that it was investigating reported faults in Honda’s seat belts, which were manufactured by the Takata Corporation. Soon after, Honda began a preemptive recall to inspect and replace the belts itself.

End Result: 3.7 million cars, made between 1986 and 1991, were recalled, with no discernible effects on Honda sales. 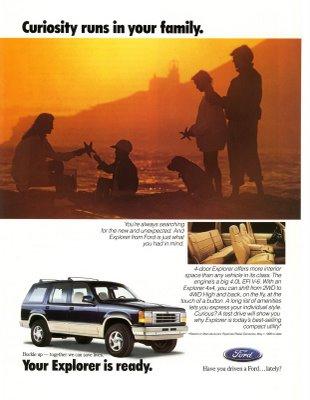 Safety Claim: The tires held a high risk of tread separation, meaning the vehicle’s treads would pull away from the tire. If this occurred at high speed, there was a good chance of rollover, which was a problem since most of the affected tires seemed to be installed on Ford Explorers.

Fact-Check: Hysteria pretty much justified: the claims were confirmed by NHTSA.

End Result: After some 100 people had died in accidents caused by the faulty treads, Bridgestone recalled 6.5 million tires at Ford’s insistence. 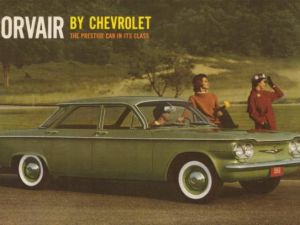 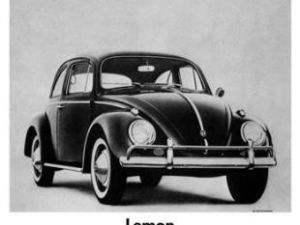 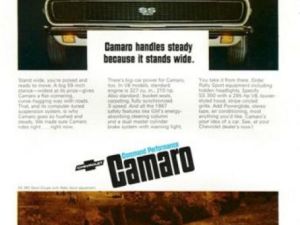 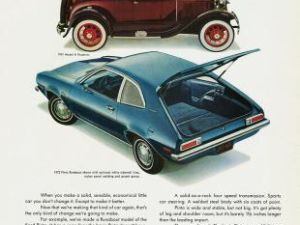 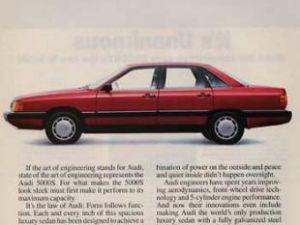 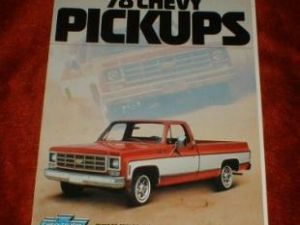 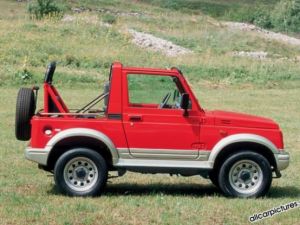 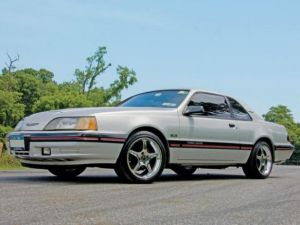 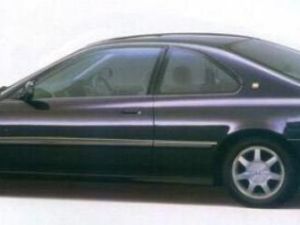 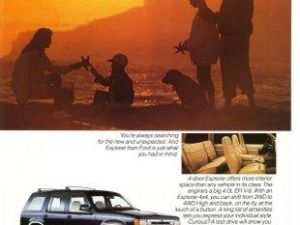