NEWARK – Their headquarters stand across the street from each other on Clinton Avenue: incumbent South Ward Councilman Oscar James II, a close ally of Mayor Cory Booker’s; and challenger Ras Baraka, a former deputy mayor for Mayor Sharpe James.

In part because Booker never built a lethal political organization in the south, home of the former mayor who served for 20 years, in part because James barely won in 2006, Newark observers believe this contest between Baraka and James represents the most intense of all the city’s Election Day fights.

“I’m not a big talker, I’m a worker, and I believe this campaign will do everything it takes to win on Tuesday,” said the councilman, standing in front of his campaign headquarters on Thursday night and pausing to call to children playing ball on the sidewalk to watch the traffic.

Just on the other side of Clinton, Baraka campaign manager Julius Montford said Baraka built lifelong community ties in the south, which defy the corporate comfort zone of the Booker administration and, by extension, Councilman James (no relation to the former mayor).

“People remember that Ras served as deputy mayor for a dollar,” said Montford. “They remember his work to negotiate a cease fire with the gangs. He went out to California and brought members of the Bloods and Crips and Latin Kings back to Newark to talk to the gangs here about ending the violence. The SOS program that the present councilman uses – that was started by Ras.”

On one level the campaign has been nerve-wracking for Baraka. He and James participated in one debate at a local church, along with three other challengers. Baraka, son of poet Amiri Baraka, made a forceful case against the Booker Team in a room packed with his supporters.

Subsequent to that, the James campaign – on orders from Booker campaign manager Pablo Fonseca – refused to participate in any remaining community forums.

Early in the campaign, James thought he would need $100,000 to fend off his adversary, but that number climbed to $200,000, with the financially well-connected mayor contributing half, in addition to providing James with speed dial contacts for more money.

“They went negative on us right away,” said Montford. “They said they were going to run a campaign on the issues, and then went negative.”

“I don’t doubt that they’re working hard over there,” said the councilman. “But I can tell you that they will not match us in terms of discipline.”

The bulk of Booker’s organizational strength lies in the city’s North Ward, whose numbers are solidly in the range of 7,000 bankable votes. Try to hit 9,000 in the North for Booker, 4,000 in the East and bring out his base of voters in the other three wards while suppressing the feeling of campaign season, and the race belongs to the mayor.

Or so runs conventional wisdom.

Fonseca’s one fear is an anti-Booker uprising originating in the south, which showed its fearsome potential to generate overwhelming power in the 2008 presidential election when 20,000 South Ward residents voted for Baraka Obama.

The political challenge for the Booker Team is to get enough votes for James to win while not stirring up anti-incumbent backlash and giving Baraka a chance – in an electric environment – to grab a bullhorn.

The combined Booker/James campaign strategy depends on quietly lighting up the councilman’s base with focused telephone and door-to-door action, combining the councilman’s roughly 3,500 votes from last time with dedicated Booker voters and new James voters, while simultaneously depressing the edges of Baraka’s base with targeted mail.

Beyond that, they don’t want to give set off any conflagrations or even create any static.

“Is there an anti-Booker sentiment out there in the south ward? You hear people say negative things – but is it combustible? No,” said Oscar James, sr., a former Sharpe James operative who’s now a Booker ally, managing his son’s campaign.

On the Saturday before Election Day, James plans a rally at headquarters – his one trumpet blast to wake the ground troops for Tuesday. Baraka has scheduled a men’s breakfast – a last ditch fundraiser to boost his grassroots campaign effort and counteract the awesome display of money on the other side – enough, he hopes, for a final charge, with what he believes will be an army of the South Ward behind him. 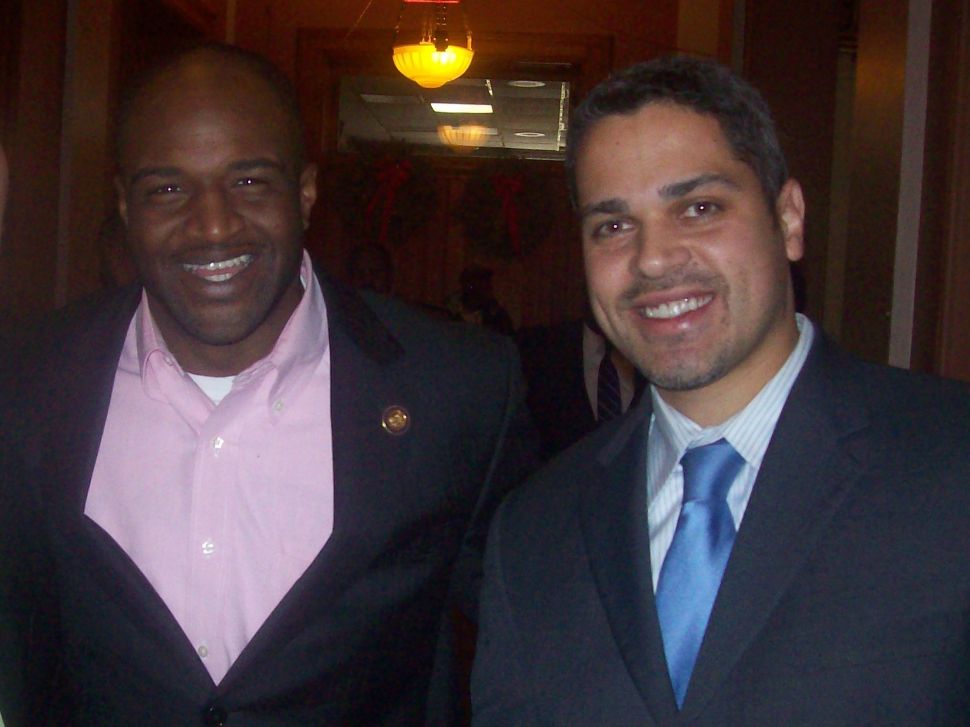