Each of the Booker allies was originally going to get a set pot of money, but James in the South received the most from the mayor as he tries to fend off Baraka, scion of a proud family with a radical past.

Future star Councilman Anibal Ramos doubles up with North Ward Democratic leader Steve Adubato as the face of what they hope will be big numbers out of the North. They want to demonstrate that the North Ward still has the best political operation in the city. Booker is popular up here in his own right, standing astride a base that overlaps Adubato’s. Mutually, they would love to see a turnout of 10,000 voters today, but would settle for 8,000.

Councilman Charles Bell accepted $5,000 from Mayor Sharpe James toward his 2008 campaign against a candidate allied with Mayor Booker. In this election, two years later, Bell has teamed up with Booker. Part of the question is whether enough old James supporters will angrily reject the councilman as a turncoat who originally marched to City Hall to be their voice of opposition, only to end up embracing Booker. Bell has other complications, too. Slowed by a stroke, he can’t campaign as hard as he once did. In addition, the old Sharpe James forces are not the only irritated party. Booker political brain Carl Sharif didn’t like the mayor’s alliance with Bell. Neither did his son, Darrin, who’s running against the councilman as a change-agent candidate. Throughout this campaign, Bell ran away from the fight with Sharif, avoiding public forums and publicly shunning the idea that he’s in a contest, figuring with five other candidates in the race, the political operative’s offspring would get lost in the sound and fury. Designed to be a projection of old-new unity, will the Booker-Bell experiment belly flop?

Veteran Councilman Augusto Amador seeks re-election against highly motivated challenger Peter Pantoliano. Whatever their personal ambitions for the seat, the two man contest has the effect of driving votes for Booker in a ward where he is very strong. Both candidates are aligned with him – Amador as a member of the mayor’s team, and Pantoliano as an “independent Booker supporter.”

Mayoral challenger Clifford Minor wants an uprising down here in the largest and mostly African American ward. This will serve as his main base of operations as he attempts to oust Booker on a backlash against the mayor. If Booker can start with huge Latino numbers in the North, Minor’s allies believe their candidate’s best shot is to counteract that down here, then fight evenly in the West and Central. Booker’s people have run a very focused and expensive campaign in the South to save Councilman Oscar James II and block Ras Baraka, who has positioned himself as Minor’s ally and the ultimate anti-establishment candidate. They also believe a win here would eradicate the troubling narrative that Booker can’t shoulder the South Ward. If Minor had run harder and demonstrated pre-Election Day dominance in the South to the degree that Booker has in the North, the Central Ward would be the main line of engagement. As it is, this, the South, is this election’s biggest battleground.

Essex County Freeholder Rufus Johnson (chief of staff to state Sen. Ronald L. Rice) runs the Minor operation over here. Buried by Booker in their 2006 mayoral tilt, Rice remains a vocal foe of Booker’s. He wants to make a statement here by showing high voter turnout for Minor. Part of Rice’s challenge is Minor is not the senator. Rice doesn’t just run his own campaigns. He runs them into the ground. His is a highly personal, door to door, face to face style, not built on large scale operations so much as touch and feel. Can that translate to another candidate who’s Rice’s temperamental political opposite? Rice’s son, West Ward Councilman Ronald C. Rice, is running virtually unopposed as a member of the Booker Team, which has its targeted voters, and is seeking to hit them without rousing the elder Rice. 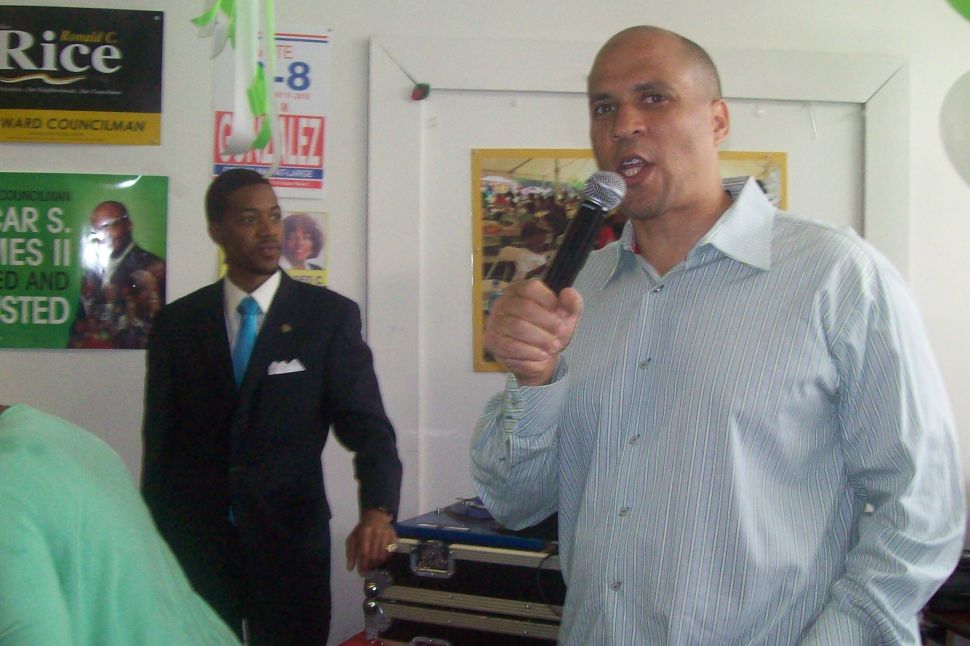