TRENTON – The statewide logo premiere of Sen. Barbara Buono appeared headed for lawn signs and placards dominated by the name of one Jon Corzine, but when the doomed Democratic governor chose Sen. Loretta Weinberg over Buono to serve as his running mate last year, Buono prepped another battle plan.

Since repackaging herself as the Senate Majority Leader-elect and then Majority Leader, Buono has steadily fortified her rep as a progressive legislator, with early notable emphasis on the environment, gay rights, and government transparency.

Having already launched her own website, she announced her plans this weekend for a “forward-thinking conversation on how we can pursue a progressive agenda for New Jersey,” scheduled for later this month.

“You ain’t seen nothing yet,” Buono told PolitickerNJ.com. “That’s what happens to a mother when her children fly the coop.”

Buono’s emergence as a darling of the opposition – not only to Gov. Chris Christie but to the soft center of her own party -assumed a bigger spotlight with the marriage equality vote during last year’s lame duck session.

While Senate President-elect Steve Sweeney (D-West Deptford) declared his resistance to the gay marriage measure on grounds that the legislature needed to focus on jobs and the economy, Buono championed the cause.

She was one of 13 Democrats to vote for the bill, a show of support celebrated by Steven Goldstein, chair and founder of Garden State Equality.

Sweeney, himself a prospective candidate for governor in 2013, later voiced his regret at not backing the bill.

“Among legislators who might run for statewide office, Barbara Buono is unsurpassed in her popularity with the progressive base of the party,” Goldstein said. “Barbara Buono has an extraordinary abilty to bring together diverse elements of the party while staying true to progressive values.

“There is a little bit of an x-factor with her too,” the gay activist added. “She has an extraordinary personality. She is one of the most effective but likeable people in public life. Rarely do you hear people say anything bad about Barbara Buono. She is an extraordinarily progressive legislator with very clear and firm values, who does not alienate people and for that reason, she would be an ideal candidate.”

In recent weeks, Buono has clashed audibly with the Christie administration, specifically Lieutenant Governor Kim Guadagno, on the contents of the governor’s red tape commission review. At issue for Buono is transparency, and she objected forcefully to the commsision’s recomendation that the commissioner of the Department of Environmental Protection – by himself – should decide on DEP rules without public input.

While fellow Democrat Assemblyman John Burzichelli (D-Paulsboro) stood with Guadagno in endorsing the final product of the commission, Buono broke from the bipartisan group and condemned its recommendations.

“When you look at the legislature, in general the Democrats have been pretty pathetic,” Tittel said. “This task force comes out with a position to weaken environmental proctections, and, in another example, Burzichelli drops a bill even more extreme in its anti-environmental provisions than the Christie position, so when you see Democrats doing that – or even a Joe D (Essex County Executive Joe DiVincenzo) – who I have a lot of respect for – saying he agrees with Chris Christie 95% of the time, the only person who’s kind of stood out is Barbara Buono.

“She was critical of the Red Tape report, and has been critical on the budget committee in resisting cuts to the DEP and water protections,” Tittel added. “So many Democrats are either in lock stop or don’t know how to stand up to the other party. What you see in Barbara Buono is, ‘wait a second, there are certain principles we believe in that these people are trying to get rid of.'”

Tittel also noted Buono’s opposition to development Fast Track – another Sweeney bill, and to a Time of Decision bill that would grandfather all building permits.

The veteran observer of the Statehouse scene said Buono’s move up to chair the budget committee last year represented her first substantial step toward flexing a distinct statewide presence.

“She’s staking out her own ground,” Tittel said. “To get where she wanted to go, she had to go along to get along, and now that she’s there, she’s one of the few people in leadership who’s acting like a Democrat. It’s good for her, but it also shows how far the Democrats have sunk in this state.”

As a co-prime sponsor of public sector pension reform, Buono endorsed contributions by teachers and other public sector workers of 1.5% of their salaries toward healthcare payments. In March, Christie signed the bill in what was the first significant sign of bipartisan love between the Democratic Legislature and the new Republican gov before relations unraveled over Christie’s firm stand against the millionarie’s tax.

Sources say that as a champ of pension reform, Buono – like other leaders in her party – would have to gently rehabiliate herself with the teachers, but she has a starting point beyond simply the sitting governor’s status as the unions’ public enemy number one. As chair of the budget committee last year, Buono refused to budge on public school reform measures opposed by the teacher’s union (and, of course, then-Gov. Corzine), which state Sen. Ray Lensiak (D-Elizabeth) spearheaded last month with cross-the-aisle support and backing from the Republican governor’s office.

In addition to defining her policies, Buono continues to project an unmistakable interest in consolidating organizational support.

She forged a relationship with state Sen. Brian Stack (D-Union City), the Hudson County power broker and fellow member of the budget committee. Two weeks ago, Buono joined Christie and others with statewide credentials and aspirations at an inaugural ceremony for Stack, who has a lock on 10,000 votes in his home city.

While it ultimately may produce no results given Stack’s good relations not only with Sweeney but also Christie, the Buono-Stack courtship is not insignificant.

If Sweeney runs for governor, the ironworker senate president will start with the well-oiled machine backing of the South Jersey Democratic Oragnization and some solid organizational connections in Essex County, not to mention the backing of private sector unions. If it’s not Sweeney who capitalizes on those alliances, the South Jersey candidate could be U.S. Rep. John Adler (D-Cherry Hill), provided Adler gets past his Republican challenger in this year’s 3rd Congressional District election.

The South Jersey rationale seems to be that if Adler can defeat a Republican in a district dominated by the GOP for over a century, he could prove to be a credible statewide presence and favorite for his organization’s support against Christie in 2013.

A common party machine criticism of Buono is that she does not have her own impenetrable base of support, like Stack, for example. As a resident of Metuchen, she lives in a town dwarfed by neighboring Edison.

But if she can’t land Stack or other machines – and this goes to another reason she could be viable if still an underdog in a Democratic Primary – Buono gained organizational strength last year with the demise of Edison Mayor Jun Choi, a longtime political rival.

Choi lost his bid for a second term to Mayor Toni Ricigliano, a Buono ally.

Buono, moreover, has built a strong alliance with Perth Amboy Mayor Wilda Diaz (who – it should be noted – is also close to Christie).

If she lacks the traditional armaments associated with a political machine, Buono hopes to bank on women – beginnning with two new leaders in her home county.

“My perspective on public policy has always been shaped by my role as a mother,” the state senator told an audience of female cops last year. “Women bring common sense to public life. We don’t define ourselves primarily by our jobs. We tend to be more deliberate than our male counterparts, and the reality is even today, women are vastly under-represented in positions of power.”

If her debut as a statewide candidate stalled last year when she didn’t make the cut as Corzine’s lieutenant governor pick, Buono also gained a reprieve – and a shot to make a future stand, apparently at the top of her own ticket. 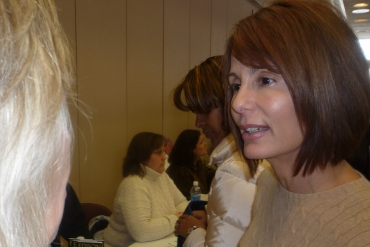