Diaz (pictured) added her name to that of Hoboken Mayor Dawn Zimmer as the second mayor from a solid Democratic Party-dominant city to endorse Christie’s spending cap.

“Governor Christie’s Cap 2.5 Reform Agenda provides the necessary steps required to rebuild our state,” said Jackson Mayor Michael Reina, a Republican who won re-election last November on the Ocean County Christie wave.  “I admire Christie’s bold move to cap property taxes, showing that New Jersey is working for its people, and not the other way around.  I support the Christie Reform Agenda and ask that Mayors around the State make the same decision. It is time to give our tax-payers a well deserved break.”

The governor wants both parties to work with him in putting the amendment before the voters for approval this November. 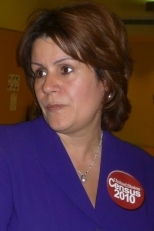