The president’s approval here slid five percentage points to 49% from 54% at the end of March. Obama now has a 49% approval and 40% disapproval rating, compared to 54% and 37% in the last measurement. Democrats approve (78%) and 75% of Republicans disapprove. The poll reflects differences between men and women and between white and non-white voters. Among men, Obama runs behind (42-49) but among women he is ahead (56-32). Among white voters the president is at 40-49. Among non-white and among African American voters he stands respectively at 74-15 and 80-8.

“The numbers are not exactly the aid and comfort Tea Partiers seek,” said Peter Woolley, a political scientist and director of the poll. “The president’s base is still strong in this state and his core supporters remain enthusiastic. But voters’ assessment of the direction in which the country is moving is now identical to their view just before the president’s inauguration in January 2009.  Now, as then, one-third (34%) say the country is moving in the right direction while half (52%) say the country is on the wrong track.

“Uncertainly about employment and the economy is enough to make many people feel the country is on the wrong track,” Woolley added. “But domestic economic worries are compounded by worries about Europe’s problems, Iraq, Afghanistan, Iran, oil spills, bailouts, debt, and North Korean saber rattling. The list seems to have gotten a lot longer.”

Fairleigh Dickinson University conducted the poll of 654 registered statewide voters by telephone from May 19, 2010, through May 23, 2010. The poll has a margin of error of +/- 4 percentage points. 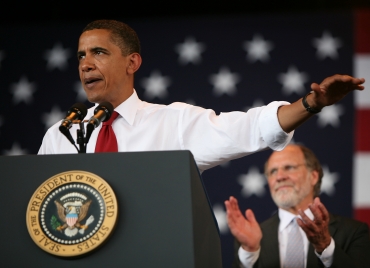