Every issue goes into the arena here in a special election in the 14th District, and the one that state Sen. Tom Goodwin (R-Hamilton) grabbed hold of enabled him today to surround himself with worried parents and children.

Intent on repealing a law requiring red decals on the cars of underage drivers, Goodwin stood in the rain of his hometown with supporters and focused populist outrage at the same Statehouse that gave birth to the law.

“Just get rid of it,” said Goodwin, who’s less than six months away from a special election showdown with Assemblywoman Linda Greenstein (D-Plainsboro).

“The people don’t want it,” added the senator, who’s worried the IDs aimed at helping cops pinpoint young drivers actually backfire in favor of child predators. “We don’t need another study. Every day they relay this, they’re putting somebody in harm’s way. Come on.”

Goodwin said he plans to follow up on a letter he sent and go directly to state Sen. Nicholas Sacco (D-North Bergen), chair of transportation, to plead for the release of a repeal bill from committee for the so-called Kyleigh’s law.

A senate short-timer who landed in the 14th District seat with the departure of Bill Baroni to the deputy director’s chair of the Port Authority of New York/New Jersey, Goodwin seized on the decal issue as his signature warcry following his swearing -in, summoning 2,500 repeal signatures from parents and children alike.

“The vast majority of kids aren’t putting this on their cars,” Goodwin said.

Greenstein formally launched her campaign against Goodwin in the Democrat-leaning district earlier this month by tying the former Hamilton Township councilman to Republican Gov. Chris Christie.

She also favors killing the law.

“I have heard from enough people in my district, and while there are good intentions behind the bill, there are also implementation problems,” she said. “We will have to go back to the drawing board to make kids safer. I am working with OLS (the Office of Legislative Services) right now to come up with a better approach.”

Greenstein said she is undecided about whether or not she would vote on Thursday in favor of a study bill, but is likely to oppose prolonging the issue and end up voting no.

“This decal just does not seem to be working very well in the first weeks that it has been implemented,” said the assemblywoman, one of 78 assembly people who a year and a half ago contributed to unanimous, bipartisan support for the decal bill, a group that included Baroni prior to Goodwin’s arrival in the upper house. 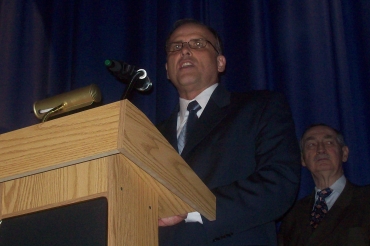