PLAINSBORO – In what many political observers anticipate will be a dipstick special election on the tenure of Gov. Chris Christie, Assemblywoman Linda Greenstein (D-Plainsboro) kicked off her 14th District campaign against state Sen. Tom Goodwin (R-Hamilton) this afternoon in a suburban Italian restaurant packed with Democratic Party power players.

“In just the first 100 days or so of the Christie administration, we’ve seen the direction in which the Republican Party, including Tom Goodwin, want to take us,” said Greenstein, a public interest attorney born and raised in the Brooklyn projects.

WIth NJEA President Barbara Keshishian in the standing-room-only audience, several bodies removed from AFL-CIO Prez. Charles Wowkanech, Greenstein  said, “Gov. Christie would like to keep Tm Goodwin in the senate as one more vote for his disastrous school funding cuts that would ultimately drive up property  taxes.”

In this classically split, blue collar district that fuses equal portions of Middlesex and Mercer counties, Democrats are heartened at the prospect of eliminating Goodwin, who stepped up to take the senate seat after Christie appointed Bill Baroni deputy executive director of the New York-New Jersey Port Authority.

“She is one of the hardest-working candidates I’ve ever been around, and I expect her to be successful and continue to work hard for working families. It will be great for us to pick up this seat. It has been tough with first (Republican) Pete Inverso in that seat and then Bill Baroni, both of whom were extremely popular. But Linda Greensten is just as popular.”

“Linda has a been a big supporter of public education and public schools,” Keshishian told PolitickerNJ.com, when asked if the 14th District Senate race is simply an extrention of the Christie versus NJEA embroglio.

“We need the governor to understand that he cannot attempt to destory public education in New Jersey, which is obviously his intent,” said the NJEA Prez. “He’s cut $1.5 billion between this year and next year in public school funding. Massive layoffs. Massive program cuts. He’s taking what is possibly the best public education system in the country and he’s trying to destroy it. We’re not going to let that happen.”

Although they hold a 2-1 advantage (46,527 Democrats to 23,266 Republicans) among registered voters, Democrats here acknowledge that the sprawling 14th is tricky, where whole sections are checkerboard voting districts, divided between public sector employees and angry taxpayers trying to keep afloat in the private sector – and a no man’s land up the middle numbering 60,654 – where both groups reside.

Tryng to claim the angry taxpayers as their voters, Goodwin Campaign Manager Matt Mowers today expanded on his candidate’s early declarations that Greenstein is a Trenton insider.

“Linda Greenstein has been part of the problem for nearly two decades, voting 83 times for higher taxes and fees and more spending year after year, causing unemployment to skyrocket,” Mowers said. “Linda Greenstein epitomizes the status quo in Trenton.  Linda helped create New Jersey’s problems, and now she wants a promotion.  Taxpayers will say no.

“We deserve effective leadership to change politics-as-usual and make our state more affordable. Tom Goodwin is the small businessman and public servant who will do just that.”

But Greenstein, a proven winner in the 14th District who works fulltime at her job and tallied the highest vote totals in the last two elections among Assembly candidates, laid claim at her kickoff today as middle class champ.

“I’m proud of my record and dedication in serving this district,” said the chair of the Assembly Judiciary Committee, standing with her running mate, labor leader Assemblyman Wayne DeAngelo (D-Hamitlon) and other allies.

“Whether it’s seeking out prescription drug programs for seniors, defending men and women in the labor movement or invigorating the economy to get people back to work, I look forward to talking about the issues – even daunting issues facing New Jersey, most notably our budget shortfall.

“We must meet our obliglations for a balanced budget that protects the most vital programs,” added the senate candidate, who decried the governor’s decision not to reinstitute a millionaire’s tax while cutting tax relief for seniors, and again identified Goodwin as a Christie soldier and “one more vote to push, shove and bully the middle class.” 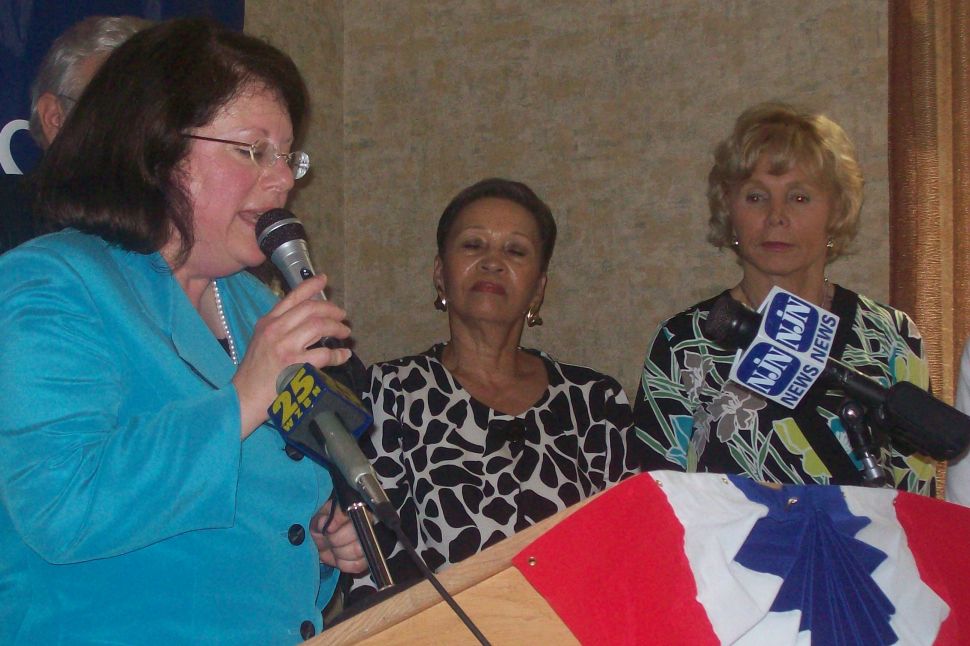