If progressive Democrats, alienated lately by a definite movement to the center by the state’s Democratic Party leadership, is looking for a liberal candidate for Governor in 2013, maybe they should convince actress Susan Sarandon to move back to Edison, where she grew up, and challenge Republican Christopher Christie.  Sarandon was the darling of the liberals at last night’s New Jersey Hall of Fame induction.  With Christie in attendance, Sarandon pointed out all the things she loves about New Jersey: elimination of the death penalty, the nation’s toughest gun laws, and legalized medical marijuana.  She then said she was proud of New Jersey high school students for exercising their right to free speech by protesting cuts in education.  That line got the most applause, perhaps because the New Jersey Education Association (NJEA) were sponsors of the event) and gave a decent number of tickets to teachers. 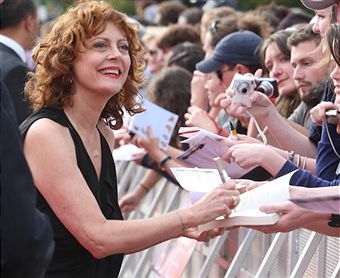