The announcement that Dale Florio will step down as Somerset County GOP Chairman after eighteen years marks the end an era in Central New Jersey politics and the final chapter in a revolution that nearly upended one of the state’s most successful Republican organizations.  His successor will be just the fourth person to lead the county GOP since Dwight Eisenhower’s first term as president.

Luke Gray was the Somerset County Republican boss for more than thirty years, until his death in 1984.  Gray, with able political allies like Raymond Bateman (who served as Executive Director of the Republican State Committee before winning election to the Assembly and Senate), former State Senator William Ozzard, and the legendary former GOP State Chairman Webster Todd, built a county organization that was unrivaled in New Jersey politics.  They turned out huge votes for Republican statewide candidates and except for the Watergate year of 1973, never lost a countywide election.

After Gray’s death, control of the party went to Assemblyman Jack Penn (R-Far Hills), who spent ten years as Watchung GOP Municipal Chairman and as a loyal member of Gray’s inner circle.  Penn was unable to replicate Gray’s leadership style, and developed problems with key party insiders.  His choice of Patrick Fittipaldi for an open Freeholder seat in 1986 was opposed by several of the sitting Freeholders. Fittipaldi just narrowly beat former North Plainfield Councilwoman Margaret Everett at a party convention.

Penn got into some trouble when he endorsed Assembly Speaker Chuck Hardwick (R-Westfield) for governor early in 1989 – and delivered a bunch of Freeholder endorsements – even though U.S. Rep. Jim Courter (R-Allamuchy) had represented parts of the county in Congress and had considerable support from GOP municipal chairs.

One week after Courter won the primary, State Sen. John Ewing (R-Peapack) challenged Penn for County Chairman.  The conflict was not entirely about gubernatorial politics: Penn had been talking about challenging Ewing for the Senate in 1991, and Ewing wanted to shut him down.  Penn won, but the contest put the party in turmoil.  That year, a Democrat, Michael Ceponis, was elected Freeholder.

In 1990, Penn ousted Freeholder Barney Wahl, who had been indicted on state corruption charges connected to a county road project and a payment for farmland preservation.  Penn replaced him with Somerville Mayor Michael Kerwin.  Kerwin had a Cammaranoesque tenure in office; he resigned soon after taking office after he was caught playing games with legal trust accounts at his law practice.  Penn also tried to dump Freeholder (and future Congressman) Michael Pappas, but his candidate, Montgomery Councilman Alexander Robinson, lost by a wide margin.

In retaliation, the party dumped Freeholder John Kitchen, a Penn ally who had been rumored to be involved in some shady real estate deals.  Kitchen lost the convention by 40 votes to Bridgewater Councilman Fred Howlett.

Team Penn got into more trouble in 1991 when Ozzard got in trouble for representing two clients in the same deal: as County Counsel, Ozzard was the attorney for the Board of Freeholders; at the same time, his law firm was representing the landfill that had the waste disposal contract for most of the county.  Ozzard, a former Senate President and Board of Public Utilities president – and a candidate for the 1969 Republican nomination for governor – looked even worse after the disclosure that the Somerset-Raritan Valley Sewerage Authority, where Ozzard was also the counsel, purchased land from the county to be used by the landfill company far below market value.

Penn faced a serious challenge for his own Assembly seat in 1991 when he was challenged in the GOP primary by Peter Biondi, a popular Freeholder and former Hillsborough mayor.  Penn, helped by the coattails of popular Assemblyman Walter Kavanaugh (R-Somerville) and the virtual burying of Biondi on the ballot, won by just 1,266 votes.

By 1992, Penn had to go, and party insiders negotiated his graceful retirement so that he could be spared the humiliation of losing.  Florio, a lobbyist and Montgomery Republican Municipal Chairman (and a former Somerville Councilman), had spent months campaigning, just in case Penn had stepped down early.  By June, Florio was so strong that Kitchen dropped out before the vote.

During his eighteen years as party chairman, Florio never lost a county race. 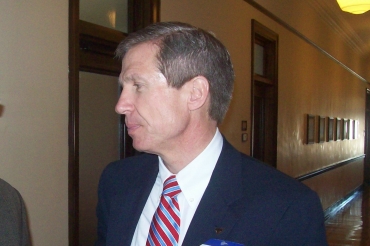