Gov. Chris Christie needs four Democrat votes to pass his budget and the question is where will he get them.

Democratic lawmakers nursing a 23-17 upper house edge are starting to look at their seat mates and wonder who’s going to crumble.

“Jeff Van Drew votes like a Republican anyway so why doesn’t he become a Republican?” grumbles a Trenton insider, arching an eyebrow in the direction of the Cape May senator.

Speculation too turns to state Sen. M. Teresa Ruiz (D-Newark), the deputy chief of staff for Essex County Executive Joe DiVincenzo, who said he agrees with 95% of what Christie is doing as governor. State Sen. Ronald L. Rice’s (D-Newark) splurge of righteous anger in his floor speech yesterday likewise reminded everyone within earshot of why he’s always a wildcard.

But while those and others are all back chamber meditations at best – and – cynical but true – in reality, everyone is a potential aye vote in the right circumstances – Christie has played very publicly for the affections and attentions of one quietly powerful presence in the senate.

This week, the governor made two trips in as many days to the North Hudson city, where last week Stack annihilated his opponent in the mayor’s race in an overkill effort that left even jaded Hudson County politicians shaking their heads in wonderment.

Certainly, Christie’s not the only A-list operator fixated on Stack.

Stack’s ability to run an organization translates into results.

With other Democratic organizations in less than stellar shape in Bergen, Middlesex and Passaic and Christie intent on upending his old adversary, Menendez heading into his 2012 re-election at the very least needs an invigorated Hudson County.

Stack’s public flirtation with Christie may have forced Menendez to rethink entrusting Stack with running Hudson, which is why sources now say Bayonne Mayor Mark Smith is the likely successor to HCDO Chairman Jerry Healy, who’s expected to step down on the first Tuesday after the June 8th Primary.

Menendez’s and Stack’s was never a cozy relationship to begin with, and while the U.S. senator can appeal to Stack’s common political heritage in their mutual late godfather William V. Musto, this cold war with Christie for Stack’s soul comes down to something much more elemental than sentimental.

Pro gay rights, pro choice, Stack usually votes like a California liberal. But deeper than that are his training and mastery of Hudson County urban politics. Unlike Newark Mayor Cory Booker, who boasted during his re-election campaign that his administration brought in $100 million in private sector dollars, Stack doesn’t have Hollywood on a speed dial.

His $100 million plus public school was a government-intensive project.

Not private playgrounds for the rich, but public centers of community pride.

Christie’s deal could be as simple as dropping the right pot of money on Union City in exchange for an aye vote on the state budget.

The trouble for Menendez though is that Stack for weeks has privately worried about assuming the chairmanship of the HCDO. Maybe his projection of public doubt was little more than a lure for Christie to come in and ramp up the Faustian drama, but sources close to the mayor/senator say he has honestly been troubled with the idea of losing hold of his base.

He’s just big enough now to have every bigshot in the state descending on Union City for a photo op. Anything bigger could break the charm.

Sources say he treaded dangerously out of Christie’s good graces last year when he signaled that he might endorse the Republican for governor – then pulled out the vote for Democrat Jon Corzine.

Christie slammed a phone down when he saw the election night numbers in Union City.

Menendez’s knowledge of Stack’s wobbling in Christie territory was another motivation to try to keep him close.

In any event, other sources say the Union City mayor’s reflection on the chairmanship ended before the Tuesday-Wednesday flashbulb frenzy with Christie.

The affable Smith, a hero cop whose big Irish-Italian family pervades nearly every strata of public life in Bayonne from the schools to the hospitals to the fire houses, is a relative political neophyte who handily won his mayoral re-election last week but couldn’t pull his council team in without a runoff.

But everyone likes him, and that includes Hudson County Executive Tom DeGise, North Bergen Mayor Nicholas Sacco – and Stack. He’s new. He carries no stigma of past political battles.

As Menendez sizes up his own comfort level with Smith as an operational force, and reconciles himself to the reality of Stack’s horse-trading prospects with Christie, it’s arguably state Senate President Steve Sweeney (D-West Deptford) who provides the more dramatic counterpoint to the governor in trying to keep Stack – as needed – in the Democrat column for the budget vote.

Also intent on being governor, Sweeney dutifully hauled from West Deptford up to Union City for Stack’s Election Night bash.

Meanwhile, there’s a rogue Essex County senator also playing in Hudson County politics, albeit not in Stack land, which he abandoned.

Codey contributed to Smith’s first mayoral campaign two years ago, and did so again in this last cycle. There’s a bond there, a relationship as palpably amiable as the frozen tundra that now characterizes Codey’s relations with Stack.

There would be an infinite regress of burnings and betrayals there but for the fact that both men are mortal – which, incidentally, is why the hurt on both sides is that much more acute.

Last night, as the Smith chairmanship hovers near inevitability at this point, Codey surfaced in a Polish hall on a stage with Harrison Mayor Ray McDonough.

Quietly but calculatedly, the outcast Irishman is playing hard in Hudson on a winning Democratic Party team.

“A bitter man,” groused a Hudson operative on the heels of the outcast Irishman’s departure from Harrison last night.

But Codey goes nowhere on the grid without a political reason.

The convergences are stark, and what is most unusual – not seen since the Tom Kean era, is the presence of a Republican governor operating intimately at Hudson’s ground zero, capitalizing most obviously on his affinity for the Union City boss.

What is certain only in the endgame is that Stack, seemingly at the edge of a deal with the governor now if not a U.S. Senator -doesn’t make a move unless he gets results.

Of course, from Christie’s standpoint, Stack is only one vote. 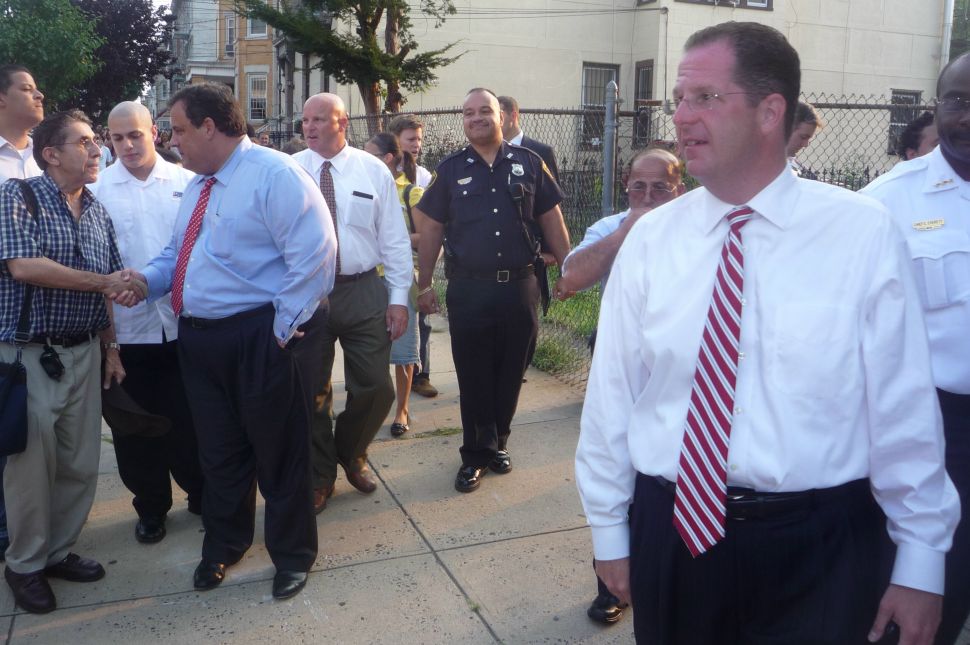