Bunk wants wants to dethrone Gerbounka in the November general election with the backing of the Union County Democratic Organization.

An independent former Democrat in a city where Democratic Party registration has a 10-1 edge over Republican registration, Gerbounka has treaded at the edges of the GOP on several occasions, notably when he backed U.S. Sen. John McCain for president over Barack Obama, and more recently in his unabashed support for Gov. Chris Christie.

Bunk was cautious in appraising the governor.

“I’ll take everything under consideration,” said the challenger, who must first get through a Democratic Primary against Council Derek Armstead before he faces Gerbounka.

“We are in hard, difficult times, and we all live through them. There are ups and downs in life, and this is one of the times that it’s down.”

Asked if he supports Christie’s hard-edged assault on the public sector, Bunk replied, “That’s a difficult question to answer. I think it should be done one step at a time – slowly instead of coming in like gangbusters. I know he says he’s not here for re-election but a politician is a politician, so we’ll see how it alll works out.”

In his build-up to introducing the governor, Gerbounka took time at the microphone explaining why he supports the Republican.

“If anybody doesn’t know Gov. Christie, they must be living in the Pine Barrens or just came back from a space station,” said the mayor. “He does not mince words. He takes a position and lets you know how he feels about it. A politician can’t please everybody, and you have to repsect a person who’s willing to make hard decisions.

“He is the governor we need in the State of New Jersey as we face serious fiscal problems,” Gerbounka added. “I told the governor I respect his position on government reform. We cannot afford to have fiscal bankruptcy.”

Gerbounka, a former Linden cop just like Bunk, recalled when local industry paid over 60% of the city’s taxes, a percentage that’s dropped to 46% in the new millenium.

“This tax shift from industry to residential is unsustainable,” he said. “We need industry for jobs. And I’m proud Gov. Christie is here.” 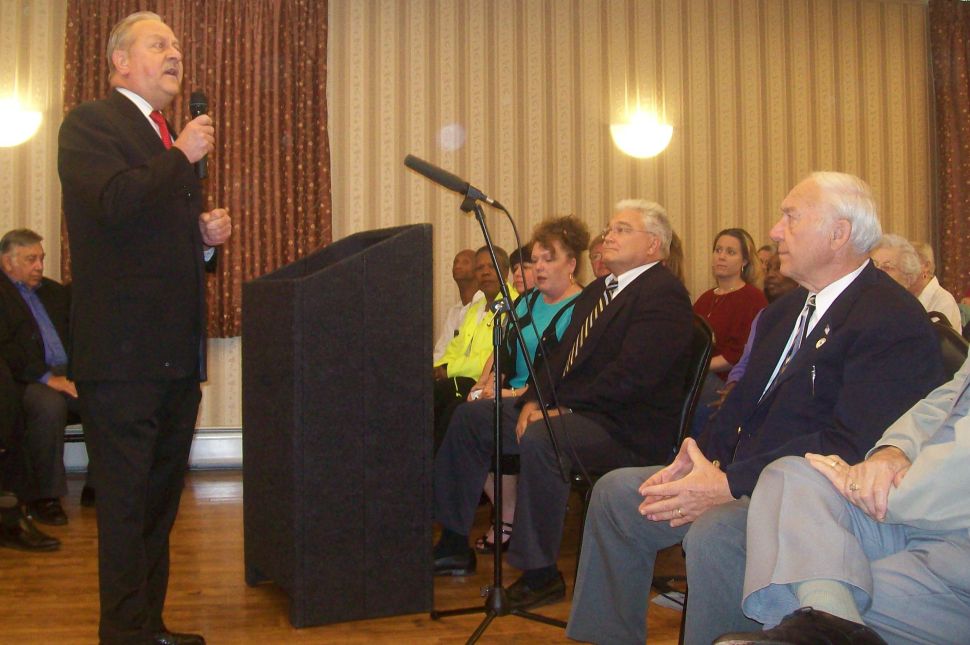