NEW BRUNSWICK – Mayor James Cahill (pictured) conducted no special gutcheck when he weighed running for a sixth term as leader of the riverside university city.

“Anytime you start to think about running, you do a self-evaluation and you consult family and friends, but I don’t think it’s a question of, ‘Is it tough out there?’ I think the question is, ‘Do I think I’m effective?'”

Cahill came to the conclusion that he still has work to do, and now does not read ominous signs into the loss of Paterson Mayor Joey Torres or decisions by incumbent mayors in Trenton and West Orange not to run again in an economic downturn. He’s not scared of a backlash against him caused by the loss of $10.5 million in state aid this year between schools and municipal government.

“Mayor Stack did okay in Union City, didn’t he?” dead-panned Cahill, identifying an urban mayor who a week ago destroyed the opposition.

But the New Brunswick native does wield counter-arguments to fellow attorney Bombelyn’s critique that he has been a pro-development mayor who’s not cultivated ties among the town’s working poor.

New Brunswick’s Gateway Transit Village project is on target for completion in 2012, and Cahill argues it contains enough facets to fit well as a centerpiece for the gritty, diverse city.

“Part of my wanting to run again is to see that and other projects through to completition,” Cahill said. “But while the development side gets the largest splash, it’s really about new jobs and new hiring opportunities, both at Gateway Village and at the new Wellness Center project.”

In the case of both mixed use projects, 20% of the residential housing units are dedicated affordable.

“Of 3,500 homes we have built or renovated, half are affordable,” added Cahill, meeting the charge that his projects tower beyond the grasp of the city’s ethnic neighborhoods. “We’ve created 6,000 new jobs and we have an unemployment rate lower than the nation, state and county – virtually unheard of when you conssider that we’re competing against suburban towns. We have the fourth lowest taxes in Middlesex County.”

The mayor said his figures take in the sweep of his 20 years in office, but mostly include achievements of the past 10-15 years.

“This election is going to come down to who’s the best qualified for the slot,” said Cahill. “The residents here are savvy enough to see our plan for real progress.” 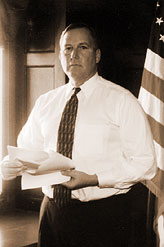