NEWARK – The South Ward: that great ocean of untapped political power laps at the edges of the rest of Newark, its 20,000 Obama voters in a ward of 32,000 registereds constantly threatening to play havoc with mathematical projections of citywide elections.

Four years ago in the largest of the city’s three so-called Black wards, Oscar James and John Sharpe James went into the municipal runoff with roughly just 3,500 votes apiece before the former prevailed and became South Ward councilman on the Booker Team and one of the mayor’s staunchest allies.

Now Ras Baraka, principal of Central High School and a former deputy mayor, wants to defeat Councilman James and send a shock wave through City Hall that the South – scattered and disorganized and balkanized to its critics, especially when contrasted with the North Ward – has the force to shove back against Booker, who’s given more than $100,000 to James to defend the mayor’s southern flank.

“They say we don’t have an organization,” says Baraka, emerging from a Saturday morning breakfast fundraiser on Elizabeth Avenue with three days to go before Election Day on May 11th.

“That’s because we don’t have the money they have – to them, organization means money,” he says. “It’s not about people, it’s not community. It’s the amount of money they have to nullify the spirit, and that’s how they’re running their campaign down here.”

The Booker backlash – the anti-establishment backlash – exists in the South, maintains Baraka.

Harnessing a ward big enough to be home to some of the city’s most recognizable political personages – Congressman Donald Payne (D-Newark) and his son, At-Large Councilman Donald Payne, Jr., former Mayor Sharpe James, Council President Mildred Crump, Assemblywoman L. Grace Spencer (D-Newark), and Councilman James – all of them Booker allies with the exception, obviously, of the former mayor – presents its own political challenges.

But additionally, Baraka, running against James and the awesome engine of the mayor’s financial connections – must  confront a seemingly constant barrage of media artillery. The challenger roams the street shaking 50 hands a day and trying to stir grassroots backing while the James campaign lays down 10,000 targeted mail pieces aimed at obliterating his candidacy.

“They’re trying to plant that seed of doubt about me to breed cynicism so that people won’t vote,” says Baraka. “That’s what this comes down to for them. They can’t run on their record, so they have to go negative and stay negative.”

Battered by the mail and television, which call into question his ability to simultaneously serve as high school principal and South Ward councilman, Baraka nevertheless trusts that his community organizing over a lifetime will counteract what he sees as the James (and Booker) campaigns’ glossy, 11th hour attempts at voter suppression.

Still, the master bullhorn wielder cannot hide his disgust at the incumbent’s refusal to fight in the traditional arena of community forums. He bristles at the almost monolithic silence from the other side as behind closed doors they drill and re-drill into their core base while trying to deaden the vote elsewhere in the South with mail. It’s a Booker Team strategy for the majority Black ward whose grand design citywide hinges on massive organizational turnout in the mostly Latino North Ward for the mayor.

“They want the south to sleep,” says Baraka, sounding almost worn out with the reluctance of Booker and his allies to close the distance of no-man’s land, epitomized by the mayor’s decision during the single television debate not to ask a question of his three opponents, or James’s move to make one community forum before boycotting the rest.

“Man, when I was 24 years old, I ran against Sharpe James for mayor, and he fought me – the mayor fought me,” Baraka remembers. “It was that fight that brought us closer together – that caused Sharpe to make me deputy mayor – a job I took for a dollar because I wanted to keep my job as a school administrator and not be beholden to anyone. I know how politics works. But that debate, that collision, that dialogue, is what democracy is all about. What we have in the city right now, with the way this mayor is running his campaign – by not showing up at debates, by not engaging, by living in fear of a ruckus – is a kind of dictatorship.”

If acclaimed – and controversial – poet Amiri Baraka’s work illuminated a Black essence of Newark, his son’s council candidacy reflects alarm with the current administration’s rapid redevelopment projects in the Central Ward, a preview, Ras Baraka believes, of some future corporate, non-Newarker takeover of his struggling – and beloved – South Ward.

“Every time there’s a project we have to run to City Hall to secure some affirmative action plan for developers,” says the candidate. “Man, we live here. We’re the majority. The jobs should be ours, not some negotiated crumbs.”

On the other side of the sprawling ward, his rival’s Clinton Avenue headquarters overflows with James backers on Saturday morning.

There’s a mounted television screen showing again and again an unflattering snapshot of Baraka, banging the dual jobs message, which Baraka gripes should have been short-circuited by the fact that James runs on a team top-heavy with double and triple dippers.

With Booker moments away from the over-packed headquarters, Terrance Bankston, an ally of the mayor’s, stands beside James as he demolishes Baraka in front of the crowd, a microphone meditation for core James supporters – amplified into the undecided ether of the South Ward in mail messaging and television advertising.

“Ras Baraka was appointed councilman – he didn’t win the seat – he was appointed, and he missed six out of ten council meetings, you can look it up, it’s public record,” says the Booker partisan. “Don’t act like we haven’t been here before. This isn’t about the mayor. If you’ve got a problem with the mayor, then run for mayor. This is about the leadership at Central High School.

“You’ve got the job,” says Bankston, addressing the absent Baraka. “Do it!

“Instead of running down to council meetings at 6 p.m., hold some afterschool classes. When you’re asking government to do more, how dare you tell me you can collect two checks?”

“Crime is not as far down as those test scores at Central High School, but we’re moving toward it,” he adds.

James, magnetic among his backers, takes the microphone long enough to pitch his reason for mostly remaining silent in this campaign against the voluble Baraka.

“I’m a worker, not a talker,” he says, before taking aim at what the Booker Team derides as the overall negative energy of the Baraka camp.

Nice guys in the one on one, runs the assessment – but haters in the context of a political campaign.

Later, all afternoon long, the forces of Councilman Anibal Ramos drive their caravan through the Latino reaches of the far North Ward business district on Mount Prospect Avenue.

An acolyte of North Ward Democratic leader Steve Adubato, Ramos shares an organizational bond with Booker, who has Adubato’s support in this election.

Ramos also possesses his own mission.

Sources say the north ward councilman wants to be mayor in four years, so while his personal opposition in the North this year runs the gamut between anemic and non-existent, Ramos seeks the projection of strength for future campaigns. One political insider calls the North “Planet Anibal” right now.

Even if it’s not their own, the Booker Team can feed on Ramos’s motivation.

Four years ago, when Ramos defeated Councilman Hector Corchado, the north drove numbers into the 10,500 range. This year, operatives intent on maintaining high numbers here for Booker in his strongest ward eyeball an optimum region of 8,000 votes.

The councilman’s allies already see a potential rival on their champion’s horizon. Lanky, likeable, newly elected school board member and Seton Hall law professor Shavar Jeffries – born and raised in the South Ward, lingers on the sidewalk in front of James’s headquarters – and later outside Baraka’s.

He was the top vote getter. Now he can cross both sides of Clinton Avenue in the South Ward.

This isn’t his race.

Not in the South Ward.

Whatever developing citywide rivalry exists with Ramos, whatever north-south dimensions permeate – to some extent – all confrontations, two other men play in the meantime for the specific parameters of the South Ward: one an ally of the current mayor’s and one a renegade.

Far from the north, well out of range of the bash back on Clinton Avenue, where James his rival readies for Tuesday’s massive, targeted GOTV operation, Baraka with three allies walks up the South Ward sidewalk outside the Donald Tucker Community Center, intent on action.

“Oscar James senior said the South isn’t combustible,” he says. “That’s where they have this whole thing figured wrong. It is combustible. It’s going to blow up on Election Day.”

He savors the metaphor. On what has been a battlefield mostly devoid of a visible opponent and craving confrontation, he can’t resist.

“We’re going to be the ones who throw the match,” Baraka says. 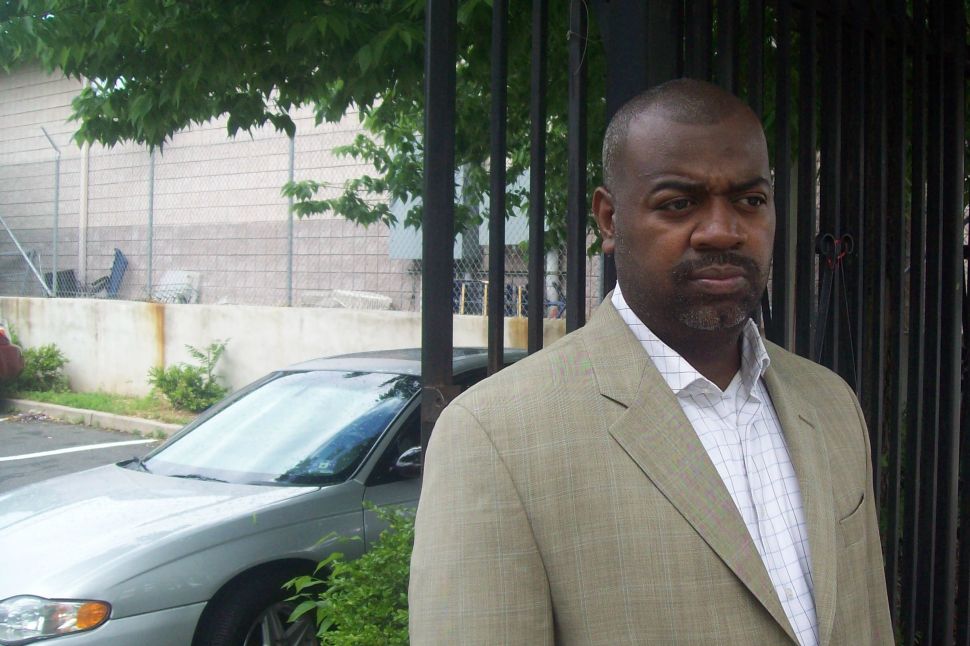