Running in opposition to the current power struture dominated for 20 years by retiring Mayor Doug Palmer, Trenton mayoral candidate John Harmon said the most striking thing about this race is Palmer’s decision to remain silent on the issue of his successor.

“There are three city council people and one government supervisor in this race for mayor,” said Harmon, former head of the Metropolitan Trenton African-American Chamber of Commerce (MTAACC).  “If the mayor thought any of them could handle the job he would have endorsed them by now.

“But the statistics in Trenton have indicted all of them, including the fact that 32% of our residents receive public assistance,” added the candidate, who came in third in 2006 with 15% of the vote behind winner Palmer – and second place finisher Tony Mack, who’s once again in the race and trying to outgut Harmon as the people-power street guy.

“What we have now is a business model that does not work,” said Harmon, a polished businessman and diametrical opposite to the rough hewn, public sector-schooled Mack.

Mack prides himsself on being the street-level former wrestler, but to Harmon he’s simply another ex-elected official momentarily lumped in the opposition camp by virtue of falling out of favor with the mayor.

“If people can sever their emotional ties to the familiar names, the decision is a no-brainer,” Harmon said. “The city is filthy. On Sanford Street where I grew up, there are 21 abandoned properties. The city’s been on automatic pilot for years. How can you elect these people? It’s ridiculous.”

While they have mutually defined themselves for four years plus as opponents of the mayor’s coming out of different corners, Mack’s and Harmon’s rivalry is not the most immediate point of contact in the race, for the ten-person contest right now is defined by candidates and their political doubles working to consolidate the same base camp of voters.

It’s allies versus allies headed toward May 11th and the right to make the June runoff.

Very roughly, businessmen Frank Weeden and Harmon – neither of whom has ever held elected office – fight for the votes of angry taxpayers.

“I think Frank has been a phenomenal advocate for the people, but I believe my experience is a little broader and a little deeper,” Harmon said. “I have the relationships that we need right now to be a true ambassador for the city and the region.”

As Harmon and Weeden engage in friendly fire, pals DPW Director Eric Jackson and Council President Paul Pintella fight for the infrastructure of City Hall, city hall workers and their minions; while former Freeholder Mack works to keep his base of hiphop voters, youth and the poor, which he’s trying to protect from the advances of local celebrity Shahid Watson.

At-Large Councilman Manny Segura starts with a small but – he hopes – mostly intact base of Latino voters, which Mack and Pintella are both trying to siphon.

In addition to fighting their own civil war for support, Palmer’s chief allies in the contest – Jackson and Pintella – to this point have mostly singled out Mack and Segura as the chief relevant enemies to the establishment.

If their attacks on the records of those two candidates start having an effect – even as Pintella and Jackson can’t get out of each other’s way – and Harmon can keep Weeden in check while confiscating jaded Mack voters – Harmon hopes to run through the conflagration unscathed as the clearest alternative to the Palmer era.

That designation would be useful in a runoff, according to the mayor’s opponents.

For under all of the other political battles and at the center of the debate stands Palmer’s proposed sale of portions of the city’s waterworks, which the mayor estimates would generate $400 million in revenue over the next 20 years.

The issue goes before voters in June – on the same day as a runoff between the top two mayoral candidates from the May 11th election in the event that no one gets 50% plus one.

Rejecting Palmer’s proposal to help plug the city’s $22 million deficit and in sync on the subject with Weeden, Mack, Segura and former Mercer County Freeholder Keith Hamilton, Harmon says he wants to alleviate the local tax burden by stimulating tourism; restoring vacant and abandoned properties to the tax rolls; auditing the fianances of the city and making cuts where necessary; improving efficiencies in the courts; and enacting a half percent tax on commuters.

“Our strategy is to address the entire city – both the city workers who have been afllicted by bad city management, and the taxpayers who have been similarly victimized,” said Harmon, trying to avoid being depicted as simply the uppercrust candidate.

“We’re intent on helping the landlord battling high taxes, who will increase the rent if he doesn’t get property tax relief.”

Inheritor of a family trucking business, which he sold before moving onto other business ventures, Harmon burnished his work at MTAACC as a community foundation for running the city.

“I brought the earned income tax program into the city six years ago,” he said. “The mayor is touting that as one of his programs, but I brought it to the city. The largest contract ever to go to an African American was done by me: the Gregory School Corporation. Nobody from the city pushed the school construction like I did.”

As he heads toward the last weekend and Tuesday’s election, Harmon admits he won’t be playing host to middleweight legend Bernard Hopkins, which is Pintella’s event on Saturday.

“To me, it’s not about last-minute gimmicks,” Harmon said. “It’s about direct converations with the voters. In 2006 the vast majority of these candidates did not run. The same policies we have now in this city have been there for years. The city has long been headed in the wrong direction.”

Her hasn’t been hit yet – hard, and if the negativity carries on unabated in the other camps of the so-called frontrunners, Harmon figures he can stay on message successfully through next Tuesday.

Even if the attacks come between now and then, he thinks he can weather them.

“Whatever they want to come at me with, bring it on – the city’s a mess, it’s been a mess, and that’s on them,” Harmon said. 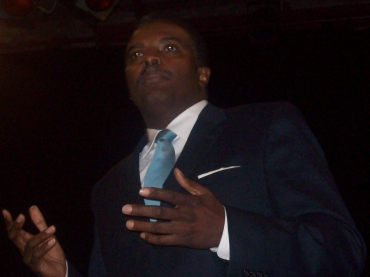