The second was that of At-Large Councilman Rigo Rodriguez, once a rising star and potentially a 2010 mayoral candidate until he helped forge a Dominican-Puerto Rican alliance with Torres in this election cycle. Many believed the alliance would be strong enough to carry both men in a city that is over 50% Latino.

But as Council President Jeffrey Jones defeated Torres on Tuesday and Councilman Ken Morris, Jr. also returned to power, the governing body also picked up Benjie Wimberly and Kenneth McDaniels, a net gain of one African-American councilman, as Jones moves from the legislative to the executive.

The loss of Rodriguez by 25 votes leaves Paterson with one Latino on the governing body, one who is known not for party building so much as fiery independence.

After their swearing in this summer, Paterson will have a total of six African Americans on the council, two Arab Americans and one Latino in a power shift that stunned Latinos across city lines in Newark’s North Ward Tuesday night.

Torres’s fall and the Latino shakeup in Paterson on Tuesday sent a shock wave through North Jersey Democratic circles this week, already harmed by Joe Ferriero’s crackup in Bergen County and an organizational mudslide in Hudson County. 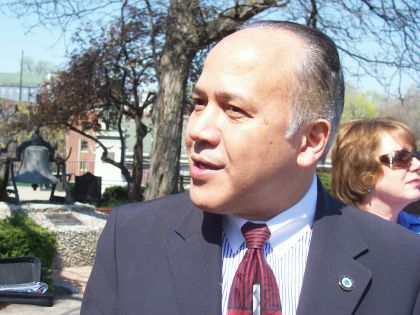