A day after Gov. Chris Christie scrapped publicly at a town hall meeting with a teacher over education cuts, Bergen County Executive Dennis McNerney searched for a way to link the governor to more child-deprivation.

Locked in a re-election campaign against Clerk Kathe Donovan, McNerney wanted to know why Christie’s town hall was held at the First Presbyterian Church in Rutherford.

“The Governor’s ‘town hall-style’ meeting resulted in the closure of the Rutherford Co-Op Day Nursery yesterday, displacing the pre-school kids enrolled and forcing parents to find alternative means for their children for the day,” said McNerney.  “The fact is if he was really listening to what people in Bergen have to say he would hear the same thing I have, residents here want him to stop attacking us through his proposed budget.

“He has taken almost half our education funding, eliminated property tax rebates for our seniors, and continues to pursue his $65 million state budget fix through a repeal of Bergen’s Blue Laws with no legal backing. I don’t need a controlled atmosphere ‘town hall-style’ meeting to know that we have to continue fighting against the disproportionate financial impact Bergen County is facing as a result of the Governor’s proposed budget.” 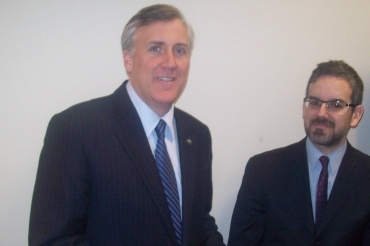