NEWARK – A truck rolls along Mount Prospect Avenue in the Latino-dominant North Ward at dusk.

It looks like an ice cream truck, only it’s not. No jingle of childlike bells accompanies its trek through the business district.

It projects a salsa beat as the beaming face of Mayor Cory Booker decaled on its side comes into view. One hears the confident voice of North Ward Councilman Anibal Ramos.

“This is Councilman Anibal Ramos, Jr. I need your help…”

The truck keeps going, through a streetscape dominated by the bigger billboard-sized face of Steve Adubato, as dominant here as a North Ward overlord – and smaller, street-level signs that feature the youthful Ramos in a sports jacket, juxtaposed with fellow Booker Team member Ramos – in shirt sleeves.

Ramos and Ramos – two proud members of the Booker Team in one.

There are actually three Latinos running with Booker: Ramos, At-Large Councilman Luis Quintana, and At-Large Councilman Carlos Gonzalez, but each comes out of a different North Ward organization and conflicting political histories, with Ramos – the Adubato acolyte – a member of the biggest and most powerful.

Five institutions: one mission, is the tag line of Adubato’s famed schools and service centers up here. But in this election, it’s three Booker Team candidates, three egos, and three different directions.

Ramos’s overwhelming fundraising and self-promotion put him on a super-sized scale in this election apparently designed to maneuver him into future citywide contention for higher office. His people drive around tonight in the Booker ice cream trucks, but the sign messaging is all solitary Ramos – who, by the way, has only token opposition in tomorrow’s municipal race.

Faced with the task of running citywide in their capacities as at-large councilmen, Gonzalez and Quintana as members of the Booker Team have a formidable challenger in John Sharpe James, son of the former mayor and the leader of an insurgency against Booker.

Unlike Ramos, who won’t lose tomorrow, one of the at-large incumbents could get picked off.

Quintana is the wily old survivor who allows his name to appear on signs with opponents of the Booker Team, including James, as a way of preserving his anti-establishment roots – and as assurance for any back door shenanigans by North Ward Democrats.

“Luis had 50 cars in his caravan the other day, man,” says a North Ward source close to Adubato. “He’s not going to lose.”

Then there’s Gonzalez, an attorney struggling to define himself as a Newark brand in a mostly African American city with two other Latinos already radiating the yin and yang of North Ward Latino politics: those like Ramos who stuck with Big Steve, and those who bucked him. His campaign ops interface most obviously with the mayor’s. A family enterprise, Gonzalez’s wife, Margarita Muniz, is one of Booker’s deputy mayors.

Throughout the North Ward, Adubato, who’s never enjoyed cozy political relations with Muniz, engages in his own version of singular power projection that threatens to overtake the mayor’s lone brightly burning star.

“I knew when Steve bought all the billboards for the North Ward Center that we had a serious shot,” attempts an ally of Booker challenger Clifford Minor, who says those vital advertising spaces should have contained the face of the mayor at election time – not the North Ward Democratic leader.

“That means he really doesn’t care about promoting Cory.”

But Adubato himself, emerging from the Flamboyan on Verona moments after the mayor tears out of there on his way to the East Ward after anchoring a unity rally, says nonsense.

“I think Mayor Booker is going to win all five wards tomorrow, what do you think of that?” asks the North Ward Democratic power broker, aware of the team’s fear of a big Minor victory in the South Ward, where the challenger concentrates his main base of operations to challenge Booker’s strength with Adubato in the North.

“Of course, the mayor is going to be strongest up here,” Adubato admits.

Political observers say even if he wins, if the mayor doesn’t crack 60% in the mayor’s race against the soft spoken Minor – given the money disparity ($8 million for Booker to just over $300,000 for Minor) and organization (there will be 2,000 Booker campaign workers on the street on Election Day) – Booker can’t escape at the very least some hard luck headlines.

In spite of the undercurrents and back dramas, the mayor wants and needs big numbers out of the North Ward.

“This is not about me,” he says. “This is about our organization.” 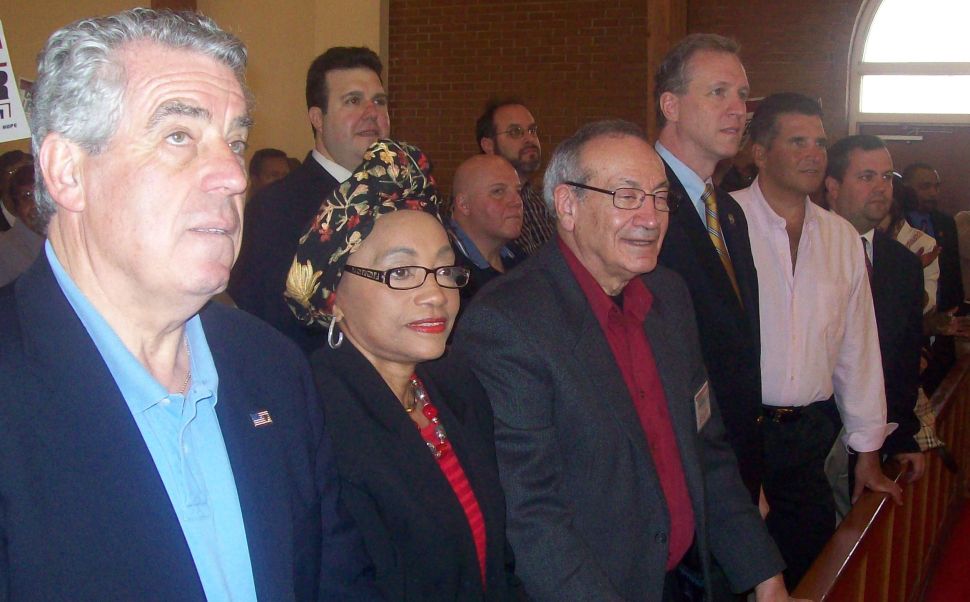