The two big city, big money mayors raised their arms in homage to their coming victory on Tuesday night.

Only one of them would remain standing.

That was Booker, whose GOTV effort (2,000 paid street workers, high-tech telephone targeting and advertising blitz) and alliances with known city quantities suffocated the opposition. The mayor’s people wanted to get him in the range of a 70% victory. It didn’t happen, but 59% in an anti-incumbent environment seemed respectable enough. They’d take it.

Then there was Torres in Paterson.

Sayegh worked hard, grindind down his shoes going door-to-door and inspiring his base of young voters with energetic speeches appealing to a new political era, which would transcend Latinos versus Blacks. But the reality of the city’s demographics persisted. Could the ward councilman – neither Black nor Latino, but a Lebanese American – truly break through the racial divide?

Jones, meanwhile, left hard-boiled politicos in search of the ultimate tough guy pose mystified by the presence of a grassroots intellectual on the New Jersey political landscape. As reported by PolitickerNJ.com in January, ask Jones why Torres’s emphasis on development projects damaged Paterson, and the council president settles into a contemplative comfort zone.

“Even in nomadic cultures, the fire at the center is what draws people back to the circle, to one another, to community,” said Jones. “Ever since I can remember in Paterson, mayors have built these towers believing that they would show outsiders some competence we possess and convince them to come, but in so doing we have forsaken creating and kindling that fire at the heart of our own community of Paterson: recreation and education.

“Many of these building projects preclude us from the very fire of culture we’re seeking,” he added. “That’s why I’m running on a people agenda, a north star agenda. That north star ain’t happening right now for Paterson. People are dying. People have no place for recreation, for healthy interaction. They have no place to open their own business. We have these big projects (like the City Center construction effort launched during the Torres years), but we’re not building people. We’re developing, but not building citizens. Rather than rely on these outside forces, we need to empower the resources we have.

“For as long as I can remember in Paterson, we have always sought that other city – that place beyond. We’re always reaching for that brass ring somewhere else. I was just talking to a young man the other day who said he wants to move to Boston. He’s never been to Boston, but it’s that beyond. We need that dream here, that north star, that fire, rekindled right here. I told him to stay here in Paterson. We need his enthusiasm here.”

The CW was that ex liquor store owner Torres with his money would smother the two eggheads running him.

After the election, sources close to a mortified Sayegh would say the 36-year old third place finisher underestimated the respective cohesion of the Latinos and Blacks, who respectively broke for Torres – but not big enough – and for Jones.

The latter’s strategy throughout the campaign was to focus on a base of voters that had coalesed behind him in three out of three winning efforts. Four years ago, Jones was the top vote getter among at-large candidates. But as with state Sen. Ronald Rice in Newark, who runs his campaigns like a lone Marine on recon, the Patersonian possessed no visible organization. He crammed no banquet halls with bodies. Held no big dollar fundraisers. Took his time handing in petition signatures. A homemade campaign poster at his kickoff featured a photo of the candidate from a political website. The candidate’s son was the welcoming committee on the sidewalk outside of headquarters. Inside a storefront with workmen pounding in the rear of the building, there were no glossy press kits. To eyes accustomed to big political productions a la Brian Stack in Union City, or Steve Adubato in Newark’s North Ward, Jones didn’t look like a look like an energized contender, let alone a juggernaut, in the state’s third largest city.

He discussed issues and ideas in at least eight public forums (which Torres as the incumbent dutifully attended), but in an era of soundbites and BlackBerry attention spans, was anyone listening?

“When you talk about crime, which crime are you talking about? Crime in the streets, or the crime of people not attending to the crime in the streets? Let that marinade a while,” he told a half empty room at his formal campaign kickoff two months ago.”

Always gut level, never on any power projection plaforms, “I’m mad,” the candidate added. “They say I’m many things: Marine, Jones, crazy – I don’t care. I’m mad. …I’m not saying they’re bums, I’m saying maybe they’ve done all they can do for us, and it’s time for us to put them out to pasture. If you want folks to recognize we’re suffering, you’ve got to change. They say the person on the second floor (of City Hall, in the mayor’s office) needs to speak Spanish. I say the person needs to do the job.”

A native of Paterson who grew up with the childhood memory of being told he couldn’t play in the park because he was Black, Jones reveled in his hometown as a 51-year old candidate and radiated campaign happiness.

“I’ve been told I talk like I’m too smart, too educated and too tall. I tell them ‘thank you,’ because people in my churches and schools when I was growing up in Paterson told me how to act and how to behave.

“There were two instances in the Marines… I was working as an amtracker, and this Marine Navy ship caught on fire, men died. I didn’t have to come back. But I have been protected. I didn’t return to the hometown I love, I wasn’t brought this far back just to sit around. I know the deals politicians make but they underestimate the citizens.”

Two weeks before Election Day, Jones mobilized his troops on the streets. A two-hour tour of the faded industrial city. Speakers throbbed with a base line and the spoken baritone pitch, “Jeff Jones… mayor. Jeff Jones… mayor.”

Led by a hand painted, throwback bandwagon, the caravan demonstrated no overwhelming force.

On Election Night, Booker’s $8 million win over Clifford Minor in Newark came as no giant-sized newsflash; but Jones’s 44-40% upset of Torres chalked a win, for once, for Paterson, which this time outmuscled the bigger Newark for the surprise factor, even as Jones said it was destiny. 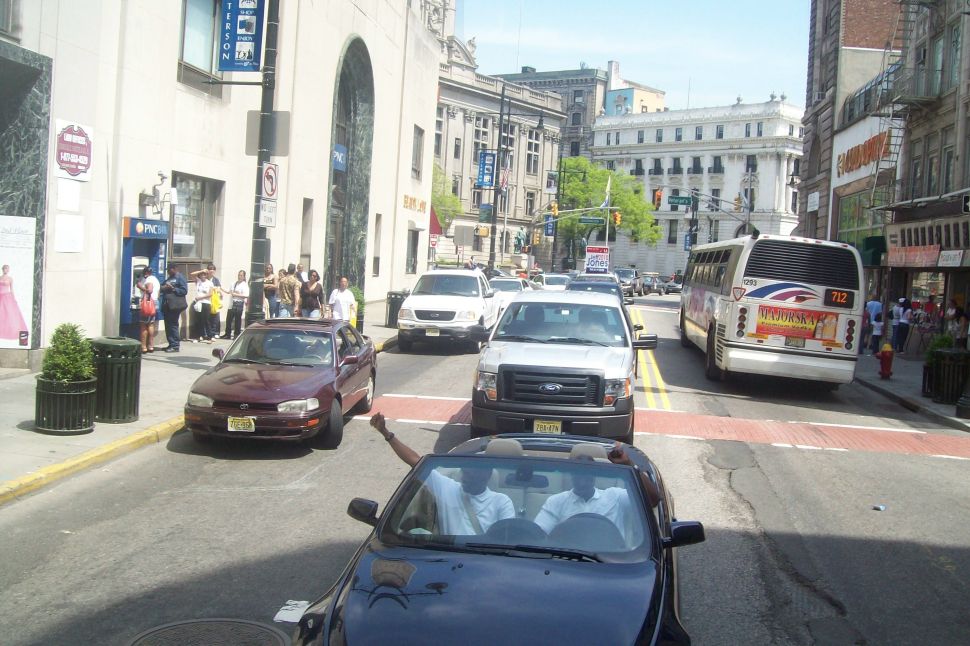