Freeholder Jim Polos of Highland Park won’t challenge Middlesex County Democratic Chairman Joe Spicuzzo, but he wouldn’t argue if someone else stepped forward at the committee’s reorganization meeting on the Tuesday after the June 8th Primary.

“I’ve had a number of committee people ask me if I would run for chairman, and it is nothing I’m interested in seeking at this point,” said Polos, who in March ran for the Democratic Party’s backing to run for sheriff and narrowly lost to nominee Freeholder Millie Scott of Piscataway.

Scott is running against Republican Keith Hackett of Monroe, a former state policeman.

“I think the party should consider new leadership,” Polos admitted, when considering Spicuzzo. “I think we need better outreach to the voters and a better message to appeal to new voters. We need to hone a message that will appeal to Democrats and independents.”

“I don’t know anyone at this point,” said the freeholder, who also quashed rumors that he’s contemplating bailing on the Democratic Party.

“I’ve been a Democrat my whole life,” said the former Highland Park mayor. “It’s a great party. I would never entertain changing parties.” 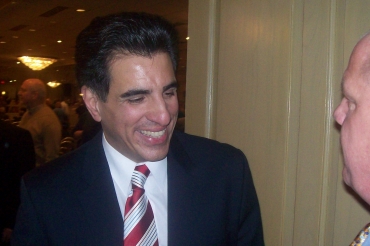