NEWARK – A swashbuckling political survivor for two decades up here in the North Ward who has jumped from one team to the next in the name of independence, At-Large Councilman Luis Quintana knows some alliances matter at least long enough to get a win.

A member of the Booker Team, the Quintana brand is not exclusive to Booker’s candidates.

A case in point is the northern portion of the Central Ward, where roughly 30 districts are the provenance of the North Ward Democratic Organization, which Quintana challenged in 2007 with his quixotic run against state Sen. M. Teresa Ruiz (D-Newark).

Some of Ruiz’s allies still sting from Quintana’s rebellion that year and don’t appreciate being in a position of having to sell him along with the rest of the Booker Team, which includes Central Ward Councilman Charles Bell.

To a loner like Quintana, improvisational politics help in that kind of environment, especially with North Ward Democratic Party darling At Large Councilman Anibal Ramos – another Booker Team member – intent on pitching the name “Ramos” in its own purity.

So over the weekend, Quintana’s name surfaced on signs along with Central Ward Council candidate Darrin Sharif – Bell’s most aggressive critic and opponent.

Coming off a five float caravan on Mother’s Day, Quintana denied he signed off on the Sharif signs.

“People put stuff on walls,” said the councilman. “I didn’t do it. If they’re promoting me, it’s because they know I’m a winner. If people want to advertise my name, I don’t tell them not to do it. I’m going to put a gun to someone’s head?

“I didn’t vote against McCarthy to be the police director – I thought the police director should come from Newark, you know that – I make my own decisions,” Quintana added. “The voters are going to decide this election. Everybody’s campaigning. I think the victory’s going to be there for those who worked hard.”

Quintana said he heard his name will be on a flyer going out tomorrow featuring At Large candidate John Sharpe James, another candidate who’s running against the Booker Team.

“We’re two days before an election, I’m not going to get into a fistfight,” Quintana said. “I’m supporting the Booker Team, but I’m independent.” 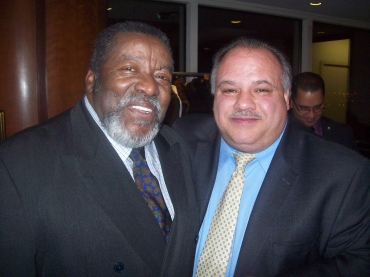