NEWARK – With the cameras turned off, the people of Sundance Channel’s Brick City sat down with state Sen. Ronald L. Rice (D-Newark) and told him they would like to film him for their show based in Newark.

They scrambled for their equipment.

“On one condition,” interrupted the West Ward-based senator.

He’d only let them film him if they agreed not to film Mayor Cory Booker.

Considering that Booker is the star of the series, the deal died right there.

Rice won’t be in the show.

But he wants more than just Booker eradicated from “Brick City.” He wants the man who defeated him four years ago in the mayor’s race out of City Hall and gone from Newark.

“Cliff Minor was born in Newark, worked in Newark all his life and served the people as a police officer, prosecutor and presiding judge,” Rice told PolitickerNJ.com. “He has the administrative skills, was a practicing attorney, and is in touch with residents in Newark fed up with crime and with paying high taxes and high water bills.

“The public is sleeping,” Rice added. “Booker’s a hypocrite, a habitual prevaricator and a no-show. The people don’t realize that on May 15th, just four days after the election, Booker is scheduled to be in Claremont California to get paid to speak at a college.

“Homicides. Corruption. The question is who’s in charge of City Hall? Another cop was indicted a week ago. We had eight shootings in one day. Booker hits town to cut a ribbon and then is back on the speaking circuit again. In contrast to that, Newark has been Cliff’s life.”

Rice urged people to vote for heavy underdog Minor, a soft spoken ex lawman who struggled throughout the campaign to find his voice and hit his stride.

“You don’t have to yell and scream to get your message across,” Rice argued in defense of his mayoral candidate. “Ken Gibson didn’t yell and scream but he did a good job with what Addonizio left him. All preachers don’t get in the pulpit and scream and shout. Preachers have to preach the gospel. People can’t use Cliff Minor’s style as an excuse.

“We’ve come from ashes to a renaissance and the mayor’s talking about Brick City,” added the senator. “We need a mayor not a hollywood movie star.” 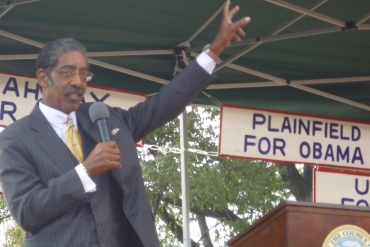