Former NFL star Jon Runyan, who is seeking the Republican nomination for Congress in the third district, today acknowledged that he was arrested for driving drunk in Ann Arbor when he was a college student in 1995.

“Being arrested for DUI while I was a college student was an embarrassing and costly mistake that I deeply regret,” said Runyan, when PolitickerNJ.com asked his campaign about the arrest.

“I take full responsibility for my actions and offer no excuses for my poor decision-making that day,” added the candidate, who is running in a GOP Primary against former Tabernacle Committeeman Justin Murphy for the right to face U.S. Rep. John Adler (D-Cherry Hill).

“I am grateful that no one was injured, or worse, as a result of my actions. I fully intend to use the lessons I learned through that experience to educate my own young children about the serious consequences of drinking and driving and urge anyone reading this to never get behind the wheel if you have been drinking,” Runyan said.

According to the report filed by the Ann Arbor Police Department, Runyan encountered the arresting officer on the night of March 9, 1995 after the cop observed the then-University of Michigan football star weaving over the line and onto the other side of State Street then stopping suddenly and inexplicably remaining stationary in the road for 20 to 25 seconds.

Runyan underwent a series of sobriety texts. He nailed the alphabet, but had trouble counting backwards from 69 to 48.

“(He) went from 60 to 49 skipping the fifties entirely,” said the officer. “(Runyan) went on to count from 49 down to the mid-forties and then went back to 49 and started to count down again to the low forties where I stopped him. … I had (Runyan) count from one to four as he touched the tips of his fingers with his thumb. (Runyan) failed to do this test accurate three out of the four times he attempted to do so. (Runyan) would count one finger two times and therefore mess his count up.”
The officer recorded the results of Runyan’s breath test as a .189% — well over the legal limit of .10%.

According to city records, Runyan pleaded guilty to operating a vehicle while impaired by liquor on March 31, 1995.  He was ordered to attend an alcohol highway safety education program, had his driving privileges suspended, and was sentenced to probation.  He  also paid $2,190 in penalties and fees. 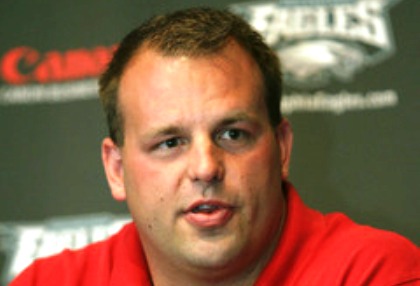