PATERSON – Ward 5 Councilman Julio Taverez went to the head of the room in El Tropico Saturday morning and told a multi-ethnic crowd of Councilman Andre Sayegh supporters that he intends to back Sayegh for mayor.

“This has to be the most difficult thing I have done in my life,” said the Dominican American. “As you know, I’m a Latino.

“Even though I look like Obama,” he added with a grin.

A Lebanese Catholic who had already secured the backing of the city’s Peruvian organization, Sayegh jumped onstage, took his ally’s hand, embraced him, and identified the endorsement as an election “game-changer.”

“The most important thing is we have Patersonians in this room,” said the ebullient Ward 6 councilman. “I’ll be the mayor for all the people, but I need all the people to help the mayor.”

Taverez will lend his name to a Sayegh mail piece targeting 3,300 voters in the 5th Ward. He intends, too, to knock on doors with his fellow 30-something council colleague and cut ads for Spanish language radio and TV.

“I have been called many things,” Taverez said. “People have said to me that I think I’m Black. I don’t know what they think now. Maybe that I’m multi-national. But I’ll tell you, by making this decision, people understand that I’m looking out for all of my community. My constituents need something better than what we have now. That’s why I’m here.”

What the city has now is two-term incumbent Mayor Jose “Joey” Torres, who presided over the construction of Home Depot and Loews and the Center City Mall, and owns a massive financial advantage over his two challengers, Sayegh and Council President Jeffrey Jones.

A Puerto Rican in a city where just over half the voting population is Latino, Torres possesses the backing of key Dominican American organizations, and has neutralized Ward 2 Councilman Aslon Goow (the lone white on the Council), and At-Large Councilman Rigo Rodriguez (the more senior and established Dominican American on the council).

Torres, moreover, controls the considerable political base of City Hall, and runs with the backing of public sector workers. In 2006, he won with 39% of the vote, beating former Police Chief Larry Spagnola, 7,654 to 5,787 votes. African American Rev. James Kuykendall came in third with 4,292 votes.

The mayor’s backers figure he will absorb some of Spagnola’s support. Jones has not endeared himself to the leadership of police department and Sayegh could not make a deal with Spagnola or Goow, both of whom live in 2nd Ward – Torres’s home – and consider themselves longtime opponents of the mayor.

But the Taverez endorsement this weekend broke up the back room monotony.

If Torres gains votes in Ward 2, he may need them, as he now has to be watching wards five and six, which he won 2-1 over his nearest competitor and by 35% respectively in 2006. Sayegh’s base is Ward 6 and Taverez’s base is neighboring Ward 5. Both men beat Torres’s candidates by wide margins when they first ran for city council in 2008.

Torres has already made moves to nullify Sayegh with the city’s Ward 6 Columbian population, making one of the councilman’s key Columbian backers from 2008 his deputy mayor, for example.

Of course, the other factor the heavily funded mayor must consider is an environment that does not favor incumbent executives. Less than 30% of registered voters – or about 18,000 – participated in the 2006 election.

But even though Sayegh has worn out six pairs of shoes and hit 7,000 doors in an effort to woo voters dogged by crime and high taxes, there are those observers who say his grassroots work will ultimately have the effect of catapulting his fellow challenger.

This year, Jones, a professor at Passaic Valley Community College and former Marine, starts presumably with his built-in African-American base (33% of the Paterson vote on paper, at least), students (a group under siege by Sayegh, who’s younger than Jones and also a professor) and soldiers, to which he hopes to add support built over the last four years as a citywide presence. In 2006, he was the high vote-getter among council candidates with 6,320.

“When we ran in 2006, I did the first and third wards – that was my specific base of people,” said the council president. “This is the first time I’ve gone citywide. There’s no telling where the numbers are going to be, particularly with the Dominicans split.

“In any event, we’re going for ten grand,” Jones added.

Shortly after Tavarez and Sayegh stood onstage at El Tropico, Jones supporters mobilized outside their candidate’s headquarters on Market Street.

A bass-heavy back beat thumped through mounted speakers on an idling rack body truck.

What do you think of Jeff Jones, someone asked Nolasco.

“He’s our version of Obama,” he said. “We need someone in City Hall who’s part soldier to get in there and kick butt.”

The soldier joined a crowd of young people, a mixture of Blacks and Latinos, who climbed aboard the rack at the head of a caravan outside Jeff Jones’s base of operations.

Someone pulled the trigger on an air siren.

Two kids waving American flags ran down to meet him and the candidate wrapped their heads in both arms and marched them up the sidewalk smiling.

Now a Dixieland band standard poured through the speakers on the bandwagon as Jones jumped aboard and stood next to Nolasco briefly before his campaign manager called up to him that she wanted him in a car directly behind.

Jones jumped down and climbed into the passenger seat of a black BMW and the caravan crawled onto Market Street.

They moved past City Hall, into the heart of downtown Paterson, where people in the old Beaux Arts buildings looked down on the waving candidate and pedestrians packing the sidewalks looked over their shoulders.

“I knew they were fragmented,” the candidate said of the Puerto-Rican/Dominican vote. “I couldn’t have scripted something like this myself; if they are as fractured as they appeared last month, Julio just put it out there.”

But the trouble for Jones – and this is where Torres also figures in part to make up what he may lose in other pockets – is the mayor runs very visibly with Councilman Ken Morris, Jr., an African American incumbent (and former council president) whose signs stand on the same lawns dominated by Torres stake-ins.

The other point politicos make is Taverez will have little impact, and didn’t risk anything by endorsing Sayegh. At least two insiders with ties to none of the three candidates said Taverez has a reputation for being a hot-head. He came into politics as a renegade in opposition to Torres and represents 680 votes Torres was not going to get anyway, in this election or the next.

“All this is interesting, but it’s going to come down to who can get the vote out,” said Spagnola, happy to not be running this year.

“That’s what it’s going to come down. Everything is perception, but it still comes down to Election Day. This is the same thing as a Democratic Primary.”

After his breakfast with Taverez, Sayegh, relentless, energized by the endorsement regardless of the consequences and intent on being the candidate who – for reasons of political survival – must pull from every piece to build a base, neither Black nor Latino himself, pushed back his chair and headed for the streets of Paterson. 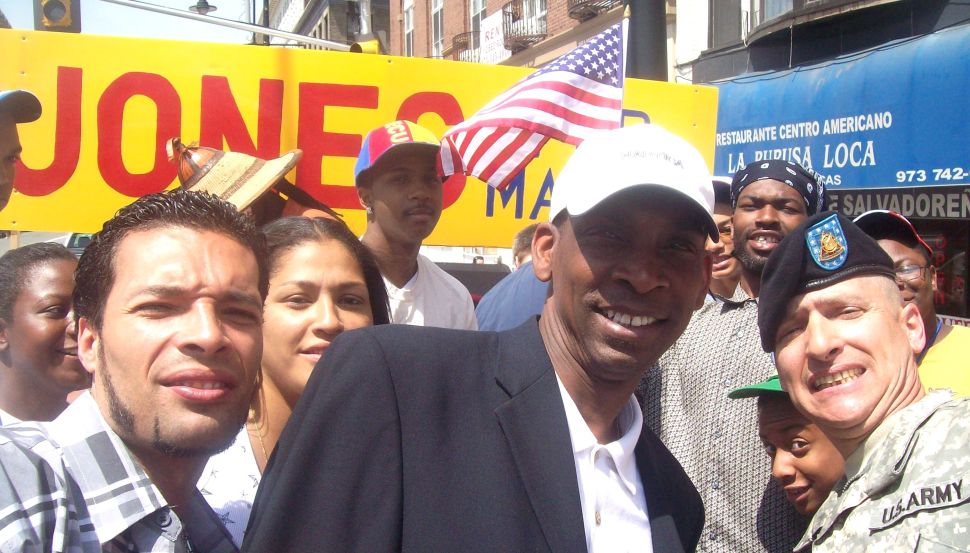