LONG BRANCH – The presence of a third candidate in the mayor’s race in a winner-take-all election prompts comparisons to last year’s gubernatorial contest, in which incumbent Jon Corzine hoped for third party candidate Chris Daggett to chew away support from under Chris Christie.

In a three-way contest on paper, Mayor Adam Schneider is pursuing re-election against Councilman Brian Unger (the mayor’s arch-rival with a busy campaign headquarters located a block and a half from the mayor’s digs) and angry homeowner Robert Krebs.

“I thought he did great at the debate,” said Schneider, who wasn’t referring to himself in the third person.

He was referring to Krebs.

Schneider and Unger both acknowledge that the lower profile Krebs – if he does anything in terms of generating votes – is likely to help Schneider and drain from Unger.

“We’re running on some of the same issues – opposition to the redevelopment project,” Unger said.

“People see signs and they think ‘candidate,'” said the mayor, who doesn’t mind Krebs upping his image to turn a Schneider-Unger showdown long in the making into a legitimate three-way contest.

Unger is convinced at this point that Krebs’s presence in the race is the only way the mayor can win re-election.

“This is a callous, cynical and self-serving strategy,” said the councilman. “It’s nakedly obvious. As we go door-to-door, I get direct feedback from voters and the word is, ‘We can’t take Schneider anymore. Please.”

Krebs doesn’t publicly disagree about Schneider. His Ocean Boulevard property lies within the city’s redevelopment zone, slated to be toppled and replaced by something newer and more hip.

Fighting the designation, Krebs sued the city last month, and filed to run for mayor against Schneider.

“Take me out of the redevelopment zone,” Krebs said. “It’s illegal. My house is not blighted. According to their standards, it is. I’m waiting for the city to answer the law suit, which I filed 45 days ago in Superior Court, but there’s been no answer.”

If political insiders down here consider Krebs a longshot in the mayor’s race, it’s because Schneider and Unger regularly trade headlines. Unger’s running an aggressive campaign against the 20-year incumbent, who four years ago became the poster boy for eminent domain as he unleashed the bulldozers on Section 8 housing to make way for oceanfront development as part of what is now a temporarily stalled Long Branch makeover.

If Krebs can’t get around Unger to establish himself as the alternative to the controversial 20-year mayor, the question is whether he will deep-six Unger’s candidacy and enable Schneider to win on May 11th.

A certified financial planner, Krebs presents himself as the only qualified person in the three-man mayor’s race. He criticizes Schneider for plunging the city into debt by $50 million as City Hall and developers in an economic downturn now mull ways to rescue the pier project.

“The mayor has deep pockets, but people I talk to as I go around door-to-door are really fed up,” said the candidate. “They tell me, ‘I can’t afford to live here anymore.'”

He believes Unger is flat-out unqualified.

“Brian is going for his doctorate in poetry,” Krebs said. “I don’t know how that’s going to help the city.”

Unger said he has a Master’s Degree in literature and is pursuing his Doctorate with an eye to teaching either high school or community college English in retirement.

“I believe the PhD is very relevant to the job of mayor,” Unger said. “It helps with critical thinking. It is a degree from a major university. Also, the mayor’s job doesn’t pay ($7,000 annually) and I am working to have another job in the future. The PhD, in the meantime, helps me on my current job, where I do a lot of editing.”

“I think Adam Schneider’s strategy – which is to tell people if you don’t vote for him, you should vote for Bob Krebs – is a very dangerous proposition,” Unger said.

“I don’t think Bob Krebs has any ability to run the city,” the councilman added. “Until recently he had a ‘for sale’ sign planted on his front lawn. His entire candidacy is really questionable. He’d be a disaster. Adam Schneider is a papered-over Republican, and Bob Krebs doesn’t have the community involvement. He’s been under the radar, visible only until when the Schneider people started promoting him.” 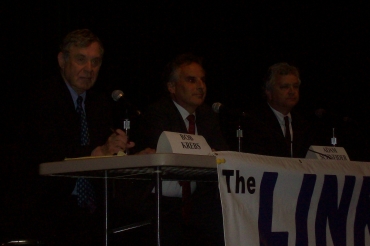