NEWARK – A lone televised encounter between Mayor Cory Booker and challenger Clifford Minor almost turns into an invisible event as no memorable moment sparks exchanges diffused by the presence of four candidates.

The rivals mingle in the television studio here at Cablevision headquarters in downtown Newark for the debate co-sponsored by the network and WBGO among Booker and Minor, Yvonne Garrett Moore and Mirna White.

There’s no big drumroll for Minor versus Booker as White, and especially Moore, prove equal air time interlocutors, thereby weakening Minor’s ability to dig in toe to toe with an incumbent who to this point has essentially ignored him.

Pre-live show, Minor sits in a chair in the sound proof room when Booker arrives with campaign manager Pablo Fonseca.

“Hey, Cliff, how are you doing, buddy?” asks Fonseca.

Last week, Minor told reporters that the campaign manager and former Booker chief-of-staff is a danger to Newark.

Now the two principals grasp hands and embrace as clumps of media types flash bulb them at close range.

Booker jumps into a barbershop chair and a makeup artist goes to work on him.

Smiling, fresh, he appears changed from earlier in the day at NJ-PAC when, surrounded by a half a dozen nibbling newsmen, he provided a rare glimpse of frayed nerves, rebuking the press corps for trying to pit him against Republican Gov. Chris Christie.

Right now he looks ready for a foursome forum that happens to include Minor, a former prosecutor and municipal judge.

An aggresive Moore does her best throughout the contest to elbow aside Minor and make the contest a Moore-Booker showdown, a strategy again undermined by multiple candidates.

Brian Jenkins of Cablevision and Monica Miller of WBGO start peppering the candidates with questions.

Booker takes a crack at the same question.

He says his administration has cut 435 shootings in the city by 50%. Installed cameras. Raised millions of private dollars.

“We as a city have pulled together… but we have to do more and we will over the next four years,” says the mayor, who moments later objects to a divide between the police department and the community.

“We’re creating more trust, and on those few occasions when police do wrong, we have better accountability systems in place.”

“If you don’t peace within the department, how can you have peace on the streets?” she asks.

Seeking to be the voice of deeply rooted Newarkers worried about the gentrification of the City Hall workforce and denied a chance to get the mayor in a public arena, Minor goes after Booker.

“We have to start investing in the private sector,” he says. “Public jobs are not going to get us out of this problem.”

Given a chance to ask his own question of the mayor, Minor tries to hammer him.

“How can you be accountable when you spend so many days out of Newark?”

“I’ve been down to Washington, D.C. at least 20 times since I’ve been mayor,” says Booker. “We got a HUD grant as big as one received by Chicago.”

“Please don’t judge me on who my friends are, but on results,” the mayor argues.

Facing a $60 million city deficit, Booker admits the situation will get worse. “If our unions don’t come back to the table, then we as a city will not be able to sustain the level of services that we have,” he says.

Given a shot to ask the mayor a question, Moore flashes bad blood with the administration, where she once served. Prodded by Jenkins to ask a question, she does finally, which the mayor prompts to urge her, “please don’t lie.”

Asked to ask a question of his opponents, Booker declines.

His reluctance to engage characterizes his entire re-election campaign, which is founded in large part on the premise that Minor – who’s raised over $300,000 to the Booker Team’s $7.5 million – has no name ID so therefore should build it on his own, with no free advertising from Booker.

If Booker hopes to hit 10,000 votes in the north – and that would be a best case scenario – somewhere in the range of 4,500 in the East and then fight on even terms in the Central, he could lose the South provided that Obama election numbers (20,000) don’t come out against the mayor. The strategy is to hit the districts where the mayor can pick up votes, but otherwise keep it quiet.

Part of that strategy means Booker was a no-show at community forums, where Minor, White and Moore regularly debated one another.

In Minor’s view, tonight offers no chance to put a dent in the incumbent.

“I think the people have a right to be involved with the mayor and for the mayor to answer questions,” the challenger adds. “If he was transparent truly, then we would have seen him at the community forums. That would have been the transparency issue for the residents – to see him at the forums we had so that he would answer questions. No matter how raucous it was, you could always control it. But he failed to face the residents. He came here tonight to answer sterile questions which he hears from the media on a regular basis. The citizens want to ask gut questions about their community, like why do the police not come when I call and why are their shootings in my neighborhood. He ducked them. He ducked the citizens’ questions.”

Fonseca welcomes Booker into the hallway after the forum.

“It’s not about rhetoric, it’s about results,” says the mayor’s campaign manager. “This is a positive campaign, we’re not going to criticize anyone, we’re just going to win.” 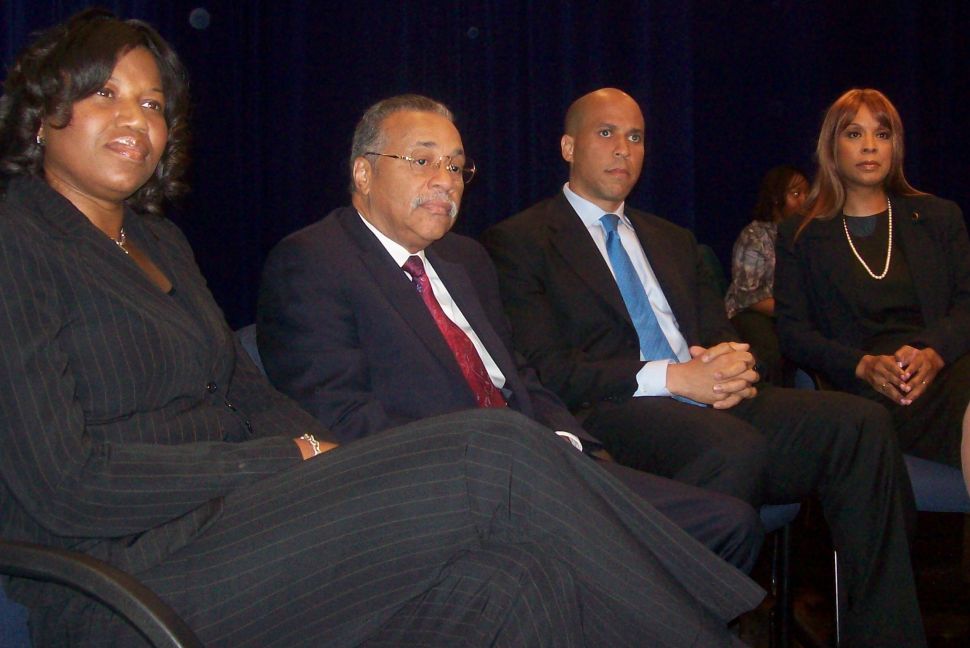