TRENTON – A band of teachers, firefighters, nurses, cops, workers, union card holders, urban guerillas, and assorted progressives rallied at the Statehouse this afternoon, demanding that Gov. Chris Christie restore the so-called millionaires’ tax on those making above $400,000 to pay for social programs and strengthen the state’s safety net in a static economy.

Two days after Christie with one stroke of his pen smothered a millionaires’ tax bill passed moments earlier in the legislature, a meshing together of public and private sector unions signified by the prominent stage presence of AFL-CIO leader Charles Wowkanech, claimed to hit the 30,000 attendance mark, making this rally the biggest show of West State Street power in Trenton history.

The New Jersey Teachers’ Association (NJEA) drove a crusading anti-Christie war whoop, as President Barbara Keshishian arrived to the guitar-bass-drum rendition of “We’re not going to take it,” performed by union musician Susan Wendelken and the Ride.

Keshishian promptly derided her GOP rival as a callous dismantler in chief.

“Governor, we can’t all live in mansions in Mendham,” the NJEA prez said. “This is the fourth highest paid governor in the country, and he’s taking every penny. Is that shared sacrifice? This is a governor who proposes a tax break for the wealthy because he believes millionaires deserve a break. He thinks he can separate NJEA from its members. He… is… wrong!

“If legislators remain silent on his cuts, they are his accomplices. …They will share the blame.”

James Harris of the NAACP likewise riled the crowd, where unflattering likenesses of the governor bobbed in playful disrespect.

The tagline “New Jersey’s biggest loser” accompanied a corpulent rendering of the governor.

“I would invite him to go to Newark, and not just to the charter school in the North Ward. Public money for public schools,” Harris said.

That received a big hand.

So too did Harris’s condemnation of Christie’s decision not to re-up state Supreme Court Justice John Wallace.

“It is wrong to remove the only African American on the Supreme Court,” he railed.

“By cutting Family Care and Senior Gold, the governor is causing New Jersey to lose federal dollars for those programs – and others – school breakfast programs, for example,” Pallone told PolitickerNJ.com. “It’s just pennywise and pound foolish. He’s not paying attention to the fact that his state cuts impact federal dollars.”

Turner said, “Despite the governor’s claim that he is not raising taxes, he is doing just that by cutting muncipal aid and the many vital services in our communities, forcing increases in property taxes. While our state’s residents are still reeling from the deep recession and other economic hits, Gov. Christie’s budget cuts are financially bleeding household budgets and undermining the lives of our hard-working families and seniors.”

The absence otherwise of visible state leadership caused at least one shouted inquiry from the crowd.

“Where’s Sheila Oliver?” demanded a woman of the Assembly Speaker.

“I think what you’re seeing here is a group of progressives who are feeling a little like their voices have been shut out of the Statehouse,” said Sierra Club chief Jeff Tittel, who circulated a petition of opposition to a bill by Assemblyman John Burzichelli (D-Paulsboro) that would weaken state environmental standards in the name of labor construction and job creation, a tack that blends amiably with Christie’s own deregulatory efforts at the state Department of Environmental Protection (DEP).

“Where is the progressive agenda?” wondered Tittel, blasting what he sees as a corporate/labor governmental bed chamber built for the mutual benefit of both parties.

But the ire here today was almost exclusively aimed at the Republican governor whose proposed municipal and school aid cuts earlier this year in particular seemed to put the NJEA and other unions in permanent war paint.

There was a man standing nearby wearing an NJEA t-shirt bearing the familiar but faded image of Jon Corzine and the slogan “One Tuff Gov.”

“A lot of these people stayed home – not teachers – but others – last year when Corzine was running for re-election, including public sector workers,” PolitickerNJ.com told Rosenstein. “Why the sudden show of passion?”

“He didn’t get 50% plus one,” Rosenstein said of last year’s gubernatorial election results. “People didn’t vote to eliminate women’s healthcare. They didn’t vote for cuts to schools and social programs.”

Banging through a catalogue of working class rock and roll standards that included “Barracuda” and “Won’t Back Down,” Wendelken changed the lyrics on “Fortunate Son” from “senator’s” to “governor’s” son, and jabbed at Christie’s beloved Bruce Springsteen by pointing out that “Bruce isn’t a fan of the governor’s even though the governor is a fan of Bruce,” before the drums kicked into “Born in the U.S.A.”

Ann Twomey, president of the Health Professionals and Allied Employees (HPEA), said of the governor’s proposed budget, “The cuts to public healthcare are so misguided, they will force people out of the profession.”

“It’s a mental hospital that will have to close as a result of Christie’s cuts,” Payne said. “The question is where are those people going to get serviced?”

Barbara Andrews Jenkins of Newark’s HPEA Local 5094, told PolitickerNJ.com, “We’ve already been terribly underfunded. People who were promised benefits never got them. These cuts of the governor’s affect services we’re providing at UMDNJ (University of Medicine and Dentistry of New Jersey) to an indigent community.”

A picture of Christie appeared on the super-sized screens. 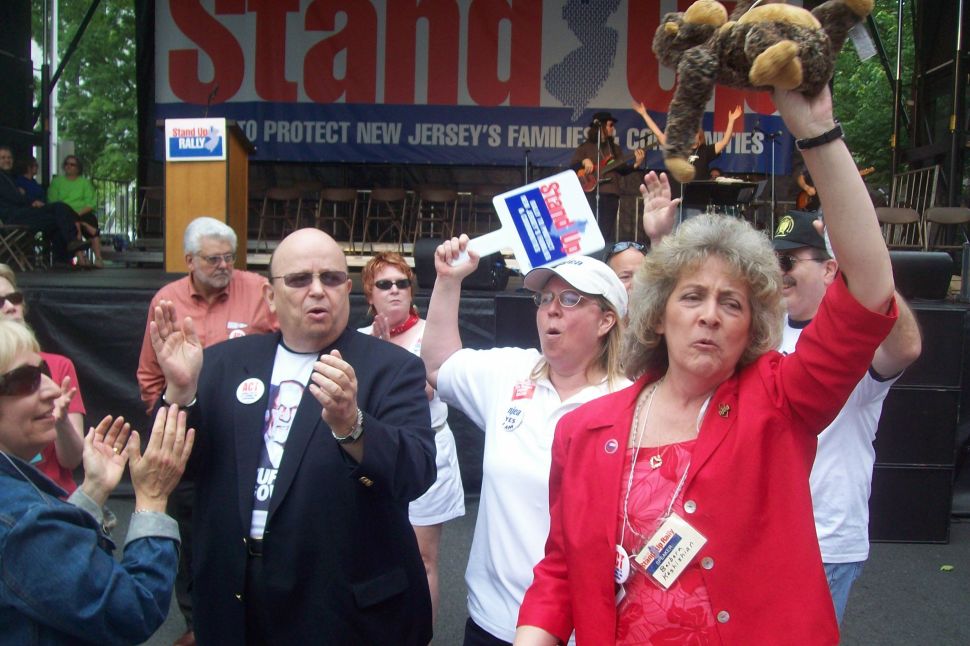