ELIZABETH – In an immigrant industrial jam up where the Goethals Bridge dangles in a distance mangled by dock cranes, smokestacks and a Singer factory turned warehouse space so big it almost blots out the refineries, veteran School Board member Rafael Fajardo looks up in awe at the Juan Pablo Duarte School.

“It’s beautiful the way it turned out. You’ve got to say it’s one of the nicest we built. The people of New Jersey can rest assured they got their money’s worth.”

It’s one of nine new Elizabeth schools dedicated by the Board in the last year.

As he drives through his city from one public school to the next, delighted with the contact when he walks the halls, touches hands of food service workers and teachers, beams at uniformed children who smile and wave back, Fajardo exudes the ease of a man unencumbered by a sense of political gravity.

“Finally you get through it,” he says, acknowledging the agitation underlying his mood. “You get through it with a sense of the spiritual. That’s the only way to get through it. But it takes a toll physically. Physically it wears you down.

“I love Elizabeth,” adds the Cuban American real estate agent. “But these political bosses treat this city like it’s their hacienda.”

Now just over a week away from what could be the most critical campaign of his 30-year political career as he supports a ticket trying to overthrow the city council and extend his reach from the schools to City Hall, Fajardo reflects on the benefactor of those establishment council people, his political adversary: state Sen. Ray Lesniak (D-Elizabeth).

There’s so much intense history welled up in their School Board versus City Government standoff, he settles for the moment on his most gentle criticism of the Union County Democratic Party kingpin.

“He doesn’t have kids in the schools,” Fajardo says of Lesniak.

A Pablo Fonseca lookalike, Fajardo first ran headlong into his rival in 1980, when each occupied a place that would become familiar territory: the opposing political camp.

Lesniak ran for mayor that year against Tom Dunn, whose allies included a 26-year old Fajardo.

Dunn beat Lesniak, and after the election, Fajardo walked into Dunn’s office.

The mayor-elect told him he was going to appoint Fajardo to the school board.

“It’s a prestigious position, Rafael. You worked hard on this campaign – showed a lot of promise. I observed you. Go ahead. You deserve it.”

A product of the Elizabeth Public School System who started out in School Number One, Fajardo finally agreed, but soon found himself fighting Dunn. The divide deepened, grew uglier. “We don’t run the school board like the Banana Republic you come from,” another board member told Fajardo. The mayor, fed up with his protege’s renegade brand, asked him to resign.

When he lost re-election without the machine’s backing, Fajardo told the Board, “I shall return,” conscious of quoting Douglas MacArthur and not caring about the stifled laugher of his political enemies.

Twelve years later, he made good on his word and did go back, winning election to the School Board as the same bonafide rebel, then successively backing candidates who ran and won.

By 1999, Lesniak in the midst of his own ascendency, realized Fajardo had legitimate game.

It was time to make a phone call.

Middle men arranged a meeting between the statewide power broker and local school board standout at Lesniak’s Elizabeth ranch house.

As the story goes, Lesniak asked Fajardo to relax for a few minutes while he finished a call on speaker phone.

“Hello, Mr. Vice President,” the state senator apparently told Al Gore, who was then a presidential candidate and evidently on the other end of the line.

They bantered back and forth: Lesniak, a former state party chairman, and Gore, the man who would-be Bill Clinton’s successor. The phone call ended with the vice president upbeat and fortified by Lesniak’s report.

There was silence in the room for a moment before Lesniak turned to Fajardo.

“I control everything in Union County except for the Elizabeth Board of Education,” he said.

He left the room and – according to Fajardo – Carlos Alma appeared. A planning board member, he bragged to Fajardo of his position and importance.

Then he asked Fajardo what he wanted.

Then he said he didn’t want anything.

“Get this (expletive) out of my house,” he allegedly told Alma.

The war between the two men intensified in 2005, when the council and Mayor Chris Bollwage, Lesniak’s staunch ally, tried to sell city land assessed at $5 million on Trumbull Street to a Bollwage backer developer for $520,000.

The School Board wanted the site in question for a vocational high school. Fajardo and the Board blocked the council, and Lesniak and his allies in turn blocked the Board.

“That area should have been turned into a high school but their greed stopped us,” Fajardo says. “It was hand to hand combat up to that point. Then it went nuclear.”

He enters the Board of Education administration building. The legal arm of the operation looks like the bridge of the U.S.S. Enterprise.

The man in charge here is named Kirk.

“We’ve had 20 audits in two years,” Fajardo explains. “It’s Lesniak trying to find any little thing we’ve done wrong so he can take us apart.”

“Not today,” says Nelson, looking at his watch.

“They have no regard for the law,” Lesniak says in a telephone interview. “I didn’t say that, the courts said that. They have used school money for political purposes.”

After enduring the audits and ongoing lawsuits, Fajardo – a Democrat – in full-blown retaliatory mode last year, endorsed Republican Chris Christie over Jon Corzine for governor, mostly to humiliate Lesniak and in an effort to stop the bleeding, according to sources familiar with the political war.

While denying that his endorsement was anything other than his selection of the best man for the job, Fajardo says Lesniak himself has embraced causes – like school choice – for no other reason than to exact local political payback.

“Lesniak is a vouchers proponent because he’s been unable to control the School Board,” Fajardo insists. “This is an act of revenge. It’s not about giving kids an education. It’s him trying to find a way to hurt the Elizabeth School System.”

He drives past the Ronald Reagan Elementary School, another one of the School Board’s cherished Abbott School achievements.

“A great president,” Fajardo explains with no trace of irony, no observable devilish glint in the eye at the enormous projection of Republican iconography in Lesniak’s hometown.

Although dismissive of his rival’s motives in advocating vouchers, Fajardo adds, and here the glint appears, “So what? We don’t mind competition.”

Which is another reason why Fajardo backs “Democrats for Change” against the five incumbent allies of Lesniak’s on the City Council. The state senator controls the governing body, says Fajardo, bends it according to the business advantage of his law firm.

A devotee of Cervantes’s “Don Quixote,” Fajardo recognizes the difficulty of these ward contests. He knows considerable money will move on the streets on Election Day. The most downbeat and dispossessed residents will find their way to the campaign headquarters of his enemies and mobilize politically – just to make it through the day.

Sources say this is it for Fajardo. He beat cancer, but the stress of a 15-year conflagration has him – by his own admission – practically hanging on at this point to beat the bell.

Re-elected to the Board in 2008, he won’t see the end of this current term.

It’s painful, but he trusts in the organization he built, the rise of young allies like Carlos Lucio and Armando DeSilva, who are both challenging sitting council members in the June 8th Democratic Primary.

Another of these allies, School Superintendent Pablo Munoz’s first instinct is to talk about education, including the district’s partnership with NASA, and receipt of A Blue Ribbon School award.

But it’s not long before he veers into that other inevitable discipline that is the mutual specialty of Lesniak and Fajardo.

“If you professionalize pit-bulls, you get trained street fighters,” says the super, “which is why we’ve put School Board members through the most rigorous Harvard-level training.”

The pit-bull reference applies to Fajardo’s and the other Board members’ battle scars from the fight with Lesniak, admits Munoz, who’s as much a political target and field general as he is a school administrator.

The infamous “Conquista Hispanola” letter was a fradulent election time document attributed to the superintendent, which tried to galvanize the surviving Italian vote in Elizabeth against  Latino challengers.

“…We must double up on our efforts to have 100% commitment by all our employees and the armada of relatives, friends, neighbors and students to operation ‘Conquista Hispanola,'” the 2006 letter reads.

“All principles of the round table must be motivated to act and push their subordinates to inspire parents to commit to putting up political signs in support of our Hispanic candidates. Even more important, though, we need to focus on our primary objective, getting the Hispanics to come out and vote for our candidate and to ensure a low turnout of the italian (sic) vote. The sixth ward will be a critical battleground as the italians (sic) feel a void in their representation. We must do everything possible to stem this potential groundswell of political support for the other candidate.”

“On the weekend before the election, that letter surfaced in the mailboxes of all the Sixth Ward Italian families,” explains Fajardo.

He can’t help but laugh at this point at the audacity.

But his coldest assessment of his rival carries no upside.

“The bottom line is Lesniak turned his senate service into a business, and his legacy is he became a millionaire,” he says.

Lesniak isn’t in a mood to listen to Fajardo’s spin.

“The bottom line?” he asks. “Who got the state aid for Elizabeth’s schools?”

He admits the Christie cuts to education hurt Elizabeth.

Moreover, the governor’s April campaign against school budgets that did not include teacher salary freezes likewise helped defeat Elizabeth’s budget by 200 votes.

When Fajardo and the eight other School Board members stood with Christie last year to endorse him for governor, they did not foresee this outcome. The intrinsic politics had created fiscal leaness as a matter of survival. Lesniak’s eagerness to destory them already had the school system on high alert, operating with what Fajardo says is near military precision. Then Christie unwittingly punished his own backers with $14 million in cuts, resulting in walking papers for 383 school employees, including 48 administrators.

“He’s got to explain that,” the state senator says.

But to the Fajardo camp, dug in stubbornly in the old entrenchments, it’s still better than the local boss.

“The only thing I like about Christie is he’s not Lesniak,” deadpans a source.

On Friday, Lesniak filed a complaint against Fajardo’s Democrats for Change team.

“NO ELEC reports,” says the senator, demanding the alternative operation shut down.

On the outskirts of City Hall, Fajardo walks into another office at Board headquarters.

There’s a pen and ink drawing by Picasso on the wall.

The School Board member complies with a laugh, though no less solemn his sense of recognition – when someone asks him to stand alongside the picture of Don Quixote. 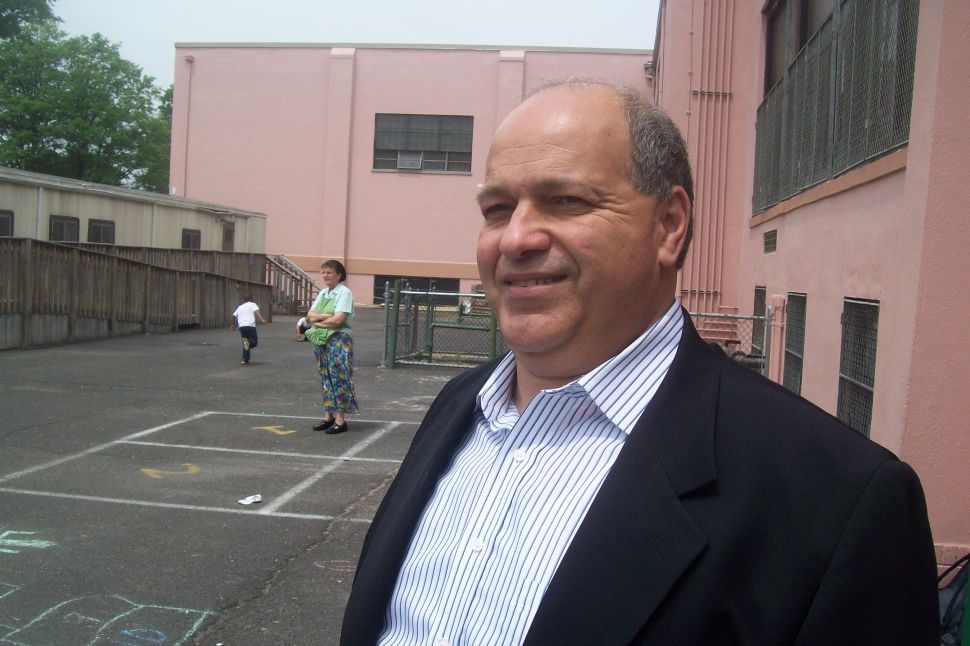