WEST ORANGE – Under the scrutiny of a spillover crowd, Robert Parisi and John Schmidt faced each other in Town Hall last night in a fast intensifying mayor’s contest, unfolding in the aftermath of a voter-rejected school budget and as small-scale dramatic duplication of Gov. Chris Christie’s ongoing statewide rodeo ride with the teachers’ union.

In a two-hour long debate moderated by Richard Groves of Men Make a Difference, the upscale gated community resident Schmidt presented himself as the Christie-style shake-up artist, while the recreation-friendly Parisi with deep roots in the town and a wife as deeply rooted, objected to the governor’s tough guy tactics.

“You have to take a position on hard issues,” Parisi said, when Groves asked him about Christie’s fight with the New Jersey Education Association.

“But his execution has been horrible, and has included wrong and offensive characterizations of teachers and students. He has maligned them with language that is inappropriate. I grew up with the belief that teachers are to be respected and revered. I think the governor’s approach sends a very wrong message to the state.”

Schmidt took Christie’s Trenton stylistics as a noteworthy model for an Essex County town that flunked a school budget requesting a 7.3% tax increase, where during a break at Tuesday night’s debate a 70-year old woman at her wit’s end told PolitickerNJ.com that she pays $15,000 in annual taxes for a condo.

“The state has an $11 billion deficit,” Schmidt told Parisi. “What government can do is continue to raise taxes or examine where the bulk of the costs are coming from, which is public employee benefits. Now, this is not an anti-teacher jihad. I recognize the nobility of the profession. But we have to find ways to reduce costs.”

Several questions later in a town close enough to the old West Ward of Newark to serve as the home for some legitimately hard nosed Irish bars, and yet sufficiently wrapped in a suburban comfort zone so that its residents feel no qualms about using terms like “Doggie park,” Groves, who read index card questions submitted by members of the audience, asked, “Which side are you on, the taxpayers or the teachers’ union?”

Schmidt took the question first, and went right to the results of the failed school budget, wherein teachers refused to take the salary freeze urged by the governor.

“…the teachers’ union is making a strategic mistake by not making a contribution to their health benefits.”

“It’s never a question of sides,” he said. “We all have a stake. We all bring a part of our personalities to the job. It’s a question of the council looking at the budget diligently. We must be as responsible as we can to ease the burden on the taxpayers.”

The numbers of West Orange registered voters favor Parisi, a Democratic Party stalwart who early in the debate fielded a question about his contributions to the New Frontier Political Action Committee, which helped bankroll Hoboken Mayor Peter Cammarano before his corruption crackup.

“I support people I believe in,” Parisi said. “I supported Peter. I was as disappointed as anyone with what happened. I supported that PAC. I’ve also supported (Newark Mayor) Cory Booker, a close personal friend since the mid 1990’s.”

But starting from his base of new voters and condo hawks, Schmidt has also made specific inroads into the African-American  and Orthodox Jewish communities in addition to binding together some of the inevitable political castaways from the McKeon/Parisi political circles.

Calling this his last effort four years after he nearly upset McKeon, and repeatedly descrying a local pay-to-play attitude at Town Hall for over a decade that indulged residential developers and bulked up school populations while failing to increase commercial ratables, Schmidt, simply a crotchety interloper in the eyes of Parisi allies, answered the charge that he knows nothing about public education since his children attend private schools.

“I have four children and they have all gone to Catholic school,” the candidate admitted. “I’m not sure why our religious views have any impact on our views of public education. Our kids deserve a better quality of education. Camden spends $30,000 per pupil and what comes out is a third world education.”

Debating on his birthday, Parisi told the crowd in his summation, “It’s a lot easier to be a challenger. I’ve perservered. Regardless of qualifications, this job begins with a belief in what you’re doing.”

Schmidt anticipates the mail and robocall attacks from Parisi in the closing six days of the campaign, the equivalent of a bullhorn drubbing over his Republican Party affiliation – although “I’ve taken nothing from the Republicans, nothing from O’Toole – not a nickel.”

Alert to emailed references to being “at war” emanating from the organization Democrats on his opponent’s side, the Hoboken transplant in his closer invoked inventor Thomas Edison, who lived in West Orange, calling for a toppling of the old regime.

“There is a spirit in New Jersey of invention and change,” Schmidt said. 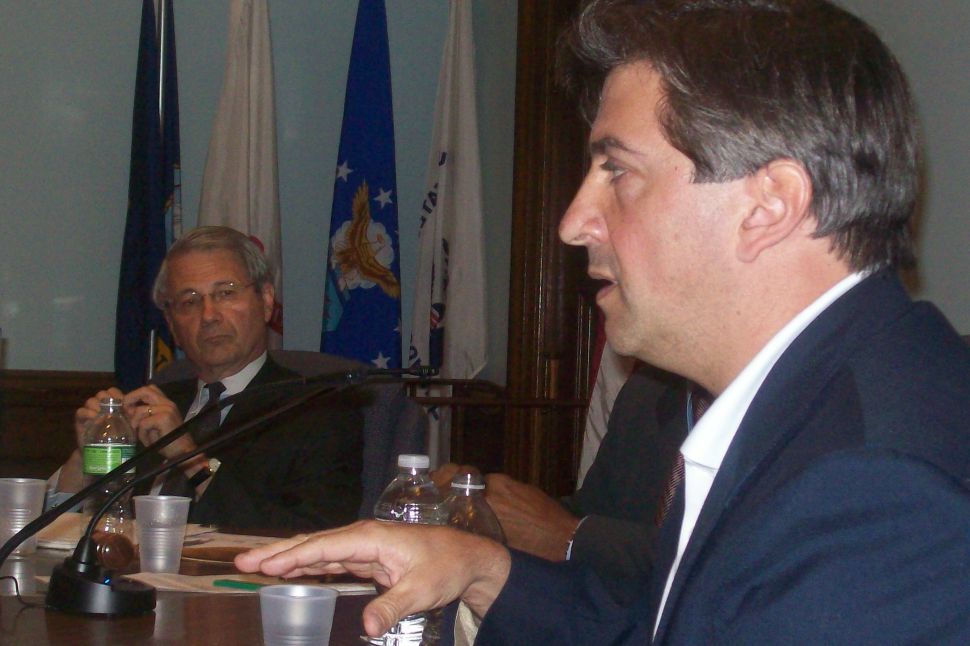