The freshman congressman stepped onto a debate stage with his 3rd Congressional District Republican combatant 13 times in 2008. He wants roughly the same amount of time against Runyan, a former Philadelphia Eagles football star.

“Yesterday I proposed that we debate twice a month, every month, until Election Day,” Adler wrote in a letter to Runyan, cc’d to the press. “I have yet to hear directly from you or your campaign regarding these debates.

“Yet, this morning, in a Courier Post article titled, ‘Adler, Runyan agree to series of debates,’ you are quoted as saying you look forward to debating.  If this is true, I hope we can quickly schedule these public discussions.

Adler then ticked off his schedule for Runyan and his availability.

“Too many New Jersey residents are sitting around their kitchen tables struggling in this economy,” wrote the congressman. “Our seniors, veterans and small businesses deserve to hear our ideas on how to solve the difficult problems facing our nation. I hope that you can make time to have an in-depth discussion on the issues facing New Jersey families.  Please call me at 856-437-6152 to plan our June debates.”

“They have specified no moderator, no location but they want to debate on Saturday,” said Runyan spokesman Chris Russell. “We’re game for debates and we want to start in the summer, but we want to sit down and talk it out.

Russell said Runyan had just penned a response to Adler’s first demand for debates when the second missive arrived via hand delivery from Adler’s people.

“Jon asked in a reponse letter why they just didn’t come down here,” Russell said. “They want to debate it in the press, but the fact remains, we’re ready to go. We’re in agreement on doing it and doing it soon.”

The general election between Adler and Runyan started as soon as Runyan recorded his 60-40% GOP primary victory over Justin Murphy.

Playing to Runyan’s perceived weakness as a dumb jock, the congressman issued the challenge for an exhaustive debate schedule. Runyan in turn jabbed at Adler’s Achilles: the fact that he’s held elected office since the late 1980’s.

After vanquishing Murphy, Runyan announced in Adler’s direction that he would term limit himself in Congress to eight years. 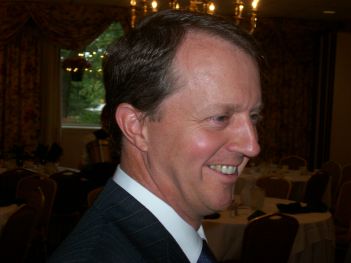