Embroiled in a city budget crisis and trying to close a $180 million budget deficit, Newark Mayor Cory Booker is scheduled tomorrow to endorse Gov. Chris Christie’s general concept of a hard cap on property taxes, according to multiple sources.

The Christie administration Sunday evening released the governor’s updated schedule, which includes the appearance with Booker in Newark set for 11 a.m.

The mayor initially considered throwing in with the governor in support of Christie’s specific proposal of a Constitutional amendement capping annual property tax hikes at 2.5%.

Late into Thursday-Friday, he worked the phones, prodding Democratic Party legislators in Newark and the environs to stand with him and the governor.

But several sources say lawmakers hardly projected eagerness to stand at attention on the issue.

Sources say in part Newark legislators worry about Booker’s plan to sell portions of Newark’s water infrastructure by creating a muncipal utilities authority (MUA), which the mayor hopes would collect $50 million this year, $40 million the following year, and $5 million annually in succeeding years. Sources say Booker wants Christie’s leveraging support with the local finance board to establish the proposed MUA, which is part of the mayor’s motivation to stand with the governor in support of the property tax hard cap.

They also have questios about Booker’s commitment to expanded charter school education, a shared vision of this governor’s and foundation for Booker’s and Christie’s combined designs for Newark.

Poised to introduce the legislation tomorrow even as Booker and Christie were settling on their bipartisan press conference, Sweeney agreed with Christie’s concept of a more stringent cap than the existing 4 percent, but argued that his own 2.9 percent cap would more closely reflect the actual rate of inflation, “so towns can budget based on realistic cost increases.”

“The current cap law has been a success, but that doesn’t mean we can’t improve upon it,” Sweeney said in a statement. “If the cap can contain property taxes to their lowest increases in a decade, then a tighter cap can definitely push increases well below the Governor’s magic 2.5 percent goal.”

Sweeney’s cap would kick in by law, not referendum, which is Christie’s endorsed method of achieving the cap.

Sources with knowledge of the conversation said Booker got on the phone with Sweeney late Saturday to explain the situation and hopefully avert the public relations firestorm that could result from a Democratic Party star endorsing the GOP governor’s tax plan over the Senate President’s version.

No offense to Sweeney’s particular proposal, but, the mayor said, he was working with the governor and prepared to endorse Christie’s proposal of a 2.5% – not 2.9% – cap. Had no idea Sweeney was going to drop this, etc. Moreover, Booker said, Newark is in a state of fiscal crisis and the city’s good relationship with the governor is imperative.

The end result – at least late Sunday – was that the mayor was prepared to endorse the “concept” of a harder cap at his double duo press conference with the governor on Monday, without alienating either Sweeney or Christie by getting more specific about which is the better pitch.

Urban mayors to date who have endorsed the governor’s proposal for a Constitutional amendment are Perth Amboy Mayor Wilda Diaz and Hoboken Mayor Dawn Zimmer, both Democrats.

Sen. Ronald Rice (D-Newark) told PolitickerNJ.com that while he still wants to examine the fine print, he agrees early with Sweeney’s 2.9 percent proposal because of the flexibility it allows for cities and local governments.

He criticized Booker for wobbling between the two proposals in the evident that the mayor does not choose one or the other.

“The MUA is the worst thing in the world,” said the veteran senator. “The MUA is worse than optimization, which is what the mayor proposed at first. Booker’s playing both ends against the middle as he tries to make a deal with the governor. There are two pieces of legislation out there so the question is, which one do you endorse? Booker has a problem regardless of what he does. 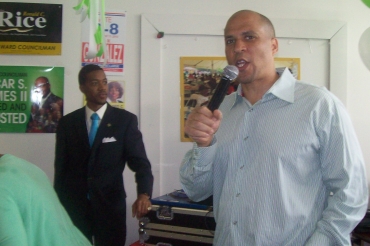